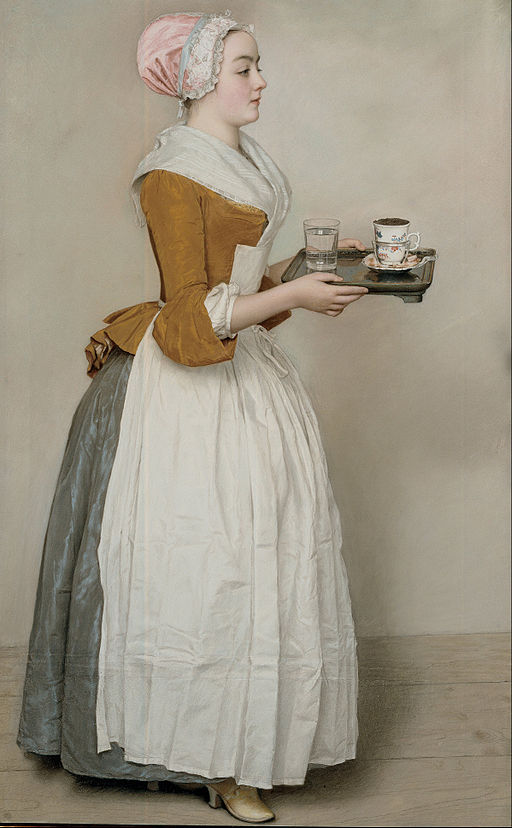 While the tray is reminiscent of Japanese lacquerware, the cup is in the Chinese porcelain style. The picture is almost devoid of shadows, with a pale background, the light being furnished by windows reflected in the water glass.

This masterpiece is painted in half-tones and perfect modeling using pastels on parchment.

The young maid’s eyes are downcast, waiting patiently for a signal to advance. The girl’s headdress is representative of the colorful regional caps in Europe.

A white shawl covers her shoulders, and a pleated linen apron tied around her waist reaches down over a long blue-grey satin skirt, whose folds glisten.

This young girl is from the family of the lower nobility. She was appointed to the court as a maiden or companion. Is this, maiden of the court, someone who impressed the artist with her beauty and poise?

Chocolate was an expensive luxury, at the time of this painting, that only the upper classes could afford. The word Chocolate was derived from the Aztec word “xocoatl,” and the first cocoa beans were brought from Mexico to Europe.

This magnificent artwork has served as inspiration for several commercial illustrations advertising the beneficial effects of chocolate, as chocolate became more common and affordable.

During World War II, the Nazis transported this painting for safekeeping to Königstein Fortress. The delicate pastel was then brought back to Dresden after the Germans retreated from the advancing Soviet army.

Until the 16th century, no European had ever tasted the famous drink from Central America. The Spanish conquistador Hernán Cortés was the first European to encounter it, as the drink was part of the after-dinner routine of Montezuma.

After the Spanish conquest of the Aztecs, chocolate was imported to Europe. It quickly became a royal favorite. The Spanish added sugar, as well as honey, to counteract the bitterness.

Vanilla, another native American introduction, was also a popular additive, with pepper and other spices sometimes used.

By 1602, chocolate had made its way from Spain to Austria. By 1662, the Pope declared that religious fasts were not broken by consuming chocolate drinks. Within about a hundred years, chocolate established a foothold throughout Europe.

Jean-Étienne Liotard (1702 – 1789) was a Swiss painter, art connoisseur, and dealer. He is best known for his portraits in pastel, and the works from his trip to Turkey.

A Huguenot of French origin and citizen of the Republic of Geneva, he was born and died in Geneva, but spent most of his career in stays in the capitals of Europe, where his portraits were much in demand.

He worked in Rome, Istanbul, Paris, Vienna, London amongst other cities.

The Chocolate Girl is one of the most famous works by the Swiss artist Jean-Étienne Liotard.

The History of Chocolate

The Forgotten History of Chocolate

“Life is like a box of chocolates. You never know what you’re gonna get.”
– From the film “Forrest Gump.