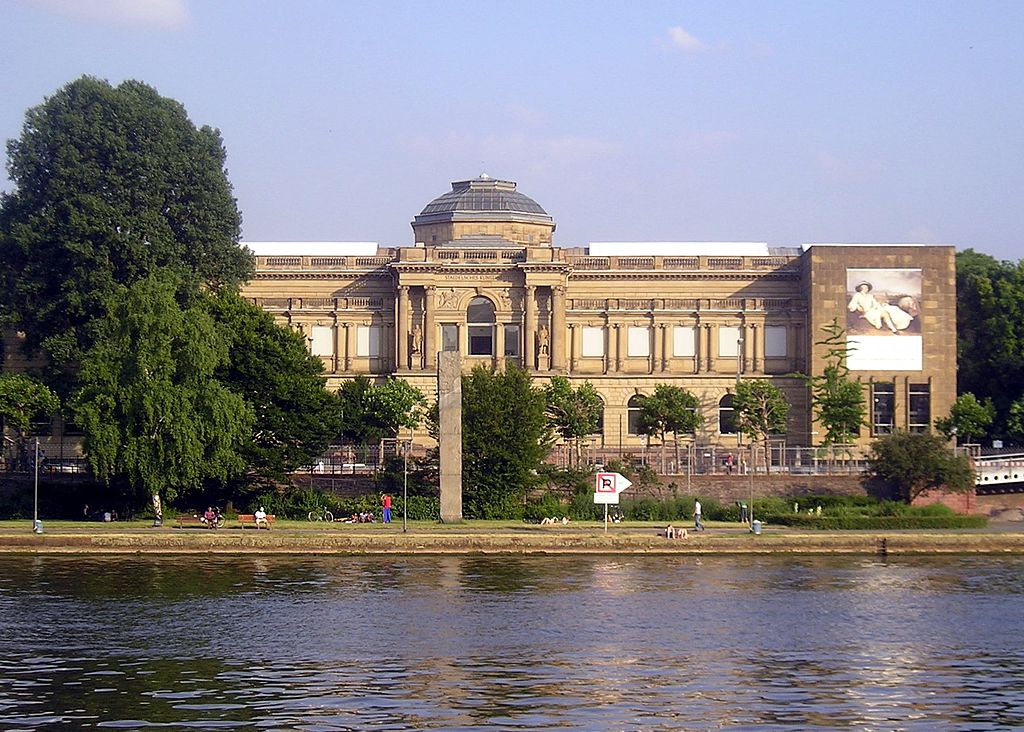 The Städel Museum, officially the Städelsches Kunstinstitut und Städtische Galerie, is an art museum with a collection of over 2,700 paintings, of which 600 are displayed and a collection of 100,000 drawings and prints as well as 600 sculptures.

The Städel Museum has European paintings beginning with the early 14th century, moving into Late Gothic, the Renaissance, Baroque, and into the 19th, 20th, and 21st centuries.

The large collection of prints and drawings is not on permanent display and occupies the first floor of the museum. Works on paper not on display can be viewed by appointment.

The Städel Museum was founded in 1817 and is one of the oldest museums in Frankfurt’s museum embankment.

The founding followed a bequest by the Frankfurt banker and art patron Johann Friedrich Städel (1728-1816), who left his house, art collection, and fortune with the request in his will for such an institution.

Virtual Tour of the Städel Museum

“Goethe in the Roman Campagna” by Johann Heinrich Wilhelm Tischbein

“The Geographer” by Johannes Vermeer

“The Geographer” by Johannes Vermeer is dressed in a Japanese-style robe, which was popular at the time with scholars.

The geographer has measured distances on a map, and now he has paused for thought.

Scientific analysis shows that Vermeer made several changes to this painting to enhance the feeling of energy in the picture.

The geographer’s head was initially in a different position with the man looking down, rather than peering out the window. The dividers he holds in his hand were initially vertical, not horizontal.

The man’s face is now slightly blurred, suggesting movement, his eyes are narrowed, to demonstrate deep thought. Vermeer has captured the moment in which the geographer is surveying the world in his imagination.

“Orchestra Musicians” depicts in the foreground part of the opera orchestra. Only the back of three musicians is visible in the bottom half of the composition, dominated by the black and white of their clothing.

The top half of the piece is the opera stage with ballet dances in full light, color, and movement. There is a distinct contrast between the youthful dances and the older aged male musicians who are squeezed together, as their black coats merge into one dark mass.

Degas initially painted a different version of the “Orchestra Musicians” in 1872 but revised it a few years later, enlarging it and converting the horizontal format into a vertical. He also overpainted parts of the original composition.

Degas added a piece of fabric to the upper edge of the canvas to make it a vertical format. He glued two canvas pieces onto another textile for support.

At the seam, a shallow horizontal groove is visible on the surface of the paint layer at the level of the dancers’ waists. The two different types of fabric are discernible in the X-ray image.

The original composition had the musicians in the orchestra pit at the center, and, on the stage in the background, only the lower half of the ballet dancers were visible.

“Susannah and the Elders” by Massimo Stanzione

“Susannah and the Elders” by Massimo Stanzione combine the sharp contrasts of light and shadow in his painting of the story of the virtuous young heroine who was falsely accused of adultery.

In this painting, Stanzione demonstrates his influence and training with Caravaggio’s follower Giovanni-Battista Caracciolo. He learned to paint using extreme light and dark tones to give the effect of form emerging from shadow.

In the biblical story, Susannah refuses to be blackmailed is arrested to be put to death for promiscuity.

However, the young Daniel, the hero of the biblical Book of Daniel, interrupts the proceedings, shouting that the elders should be questioned to prevent the death of an innocent.

After the Elders are separated, the two men are cross-examined about details of what they saw.

In 1937, 77 paintings and 700 prints were confiscated from the museum when the National Socialists declared them “degenerate art”. In 1939, the collection was moved out of Frankfurt to protect it from damage in World War II.

The collection was stored in the Schloss Rossbach, a castle in Bavaria. There, the museum’s paintings and library were discovered by Lt. Thomas Carr Howe of the American Monuments, Fine Arts, and Archives program.