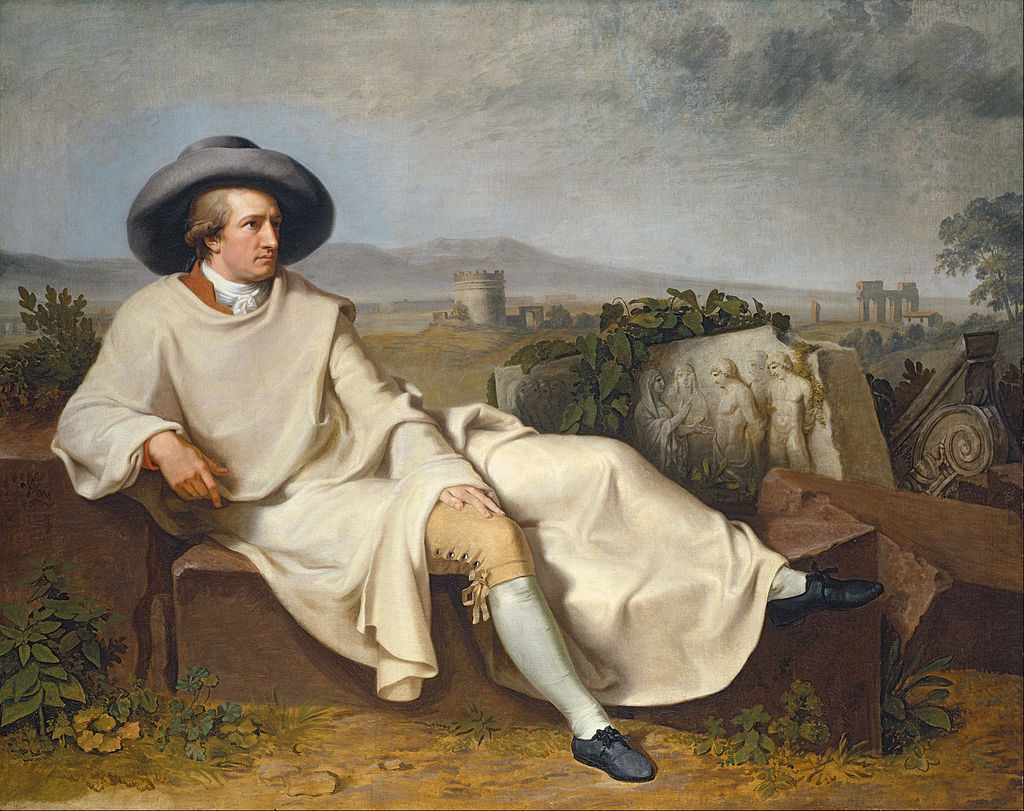 “Goethe in the Roman Campagna” by Tischbein

This was an intellectual and spiritual movement of the time that influenced the culture, and that affected Goethe and Tischbein.

Goethe’s novel “The Sorrows of Young Werther” has become so popular, that at this time, that he had to travel under a pseudonym to avoid recognition.

Goethe’s Grand Tour started in 1786. During the journey, in Rome, he met several German artists and stayed with Tischbein with whom he had become friendly through correspondence.

The Tischbeins were a family of renowned painters well-known in Germany long before Goethe himself became famous.

This painting was donated to the Städel Museum in 1887, at a time when the Goethe cult was at its peak.

The new German Empire was looking for significant cultural icons that could form a collective past, and Goethe was one who was elevated to national status.

This portrait became symbolic of the German high point of knowledge, art, and culture. The painting is considered an icon of German national painting.

It has played a crucial role in shaping the image of Goethe, as embodying Germany’s classical humanistic ideal.

Besides, numerous literary and scientific fragments, more than 10,000 letters, and nearly 3,000 drawings by him have survived.

Goethe had a significant effect on the nineteenth century. In many respects, he was the originator of many ideas, which later became widespread. His non-fiction writings, most of which are philosophic, spurred the development of many thinkers.

Goethe was also a cultural force. During his first meeting with Napoleon in 1808, the two discussed politics, the writings of Voltaire, and Goethe’s Sorrows of Young Werther, which Napoleon had read seven times and ranked among his favorites.

Goethe always spoke of Napoleon with the greatest respect, confessing that “nothing higher and more pleasing could have happened to me in all my life” than to have met Napoleon in person.

It was to a considerable degree due to Goethe’s reputation that the city of Weimar was chosen in 1919 as the venue for the national assembly, convened to draft a new constitution for what would become known as Germany’s Weimar Republic.

Goethe became an essential reference for Thomas Mann in his speeches and essays defending the republic.

Goethe’s ideas on evolution would frame the question that Darwin and Wallace would approach within the scientific paradigm.

Nikola Tesla was heavily influenced by Goethe’s Faust, his favorite poem, and had memorized the entire text.

It was while reciting a particular verse that he was struck with the epiphany that would lead to the idea of the rotating magnetic field and, ultimately, alternating current.

The Roman Campagna is a low-lying area surrounding Rome in central Italy. The rustic beauty of the Campagna inspired the painters who flocked to Rome in the 18th and 19th centuries.

During that time, the Campagna became the most painted landscape in Europe. An excursion into the Roman countryside was an essential part of the Grand Tour.

The region was reclaimed in the 19th and 20th centuries for new settlements. Starting in the 1950s, the expansion of Rome overtook large parts of the Campagna, all around the city.

The only continuous green area where the natural resources of the region were saved from overbuilding is along the Appian Way.

Johann Heinrich Wilhelm Tischbein (1751 – 1829), was a German Neoclassical painter from a family of artists.

In 1783, he was able to return to Rome with a grant from Duke Ernest II, obtained upon the recommendation of Johann Wolfgang von Goethe.

He remained in Italy until 1799 and became friends with Goethe, traveling with him to Naples in 1787.

During his last ten years there, he was the director of the Accademia di Belle Arti di Napoli. He left following the French occupation.

“Knowing is not enough; we must apply.”

“Willing is not enough; we must do.”

“Few people have the imagination for reality.”

“Whatever you can do or dream, you can begin it.”

“Boldness has genius, power, and magic in it.”

“The soul that sees beauty may sometimes walk alone.”

“Nothing is worth more than this day.”

“None are more hopelessly enslaved than those who falsely believe they are free.”

“Every day we should hear at least one little song, read one good poem, see one exquisite picture, and, if possible, speak a few sensible words.”

“Magic is believing in yourself; if you can do that, you can make anything happen.”

“As soon as you trust yourself, you will know how to live.”

“Knowing is not enough; we must apply.”
– Goethe