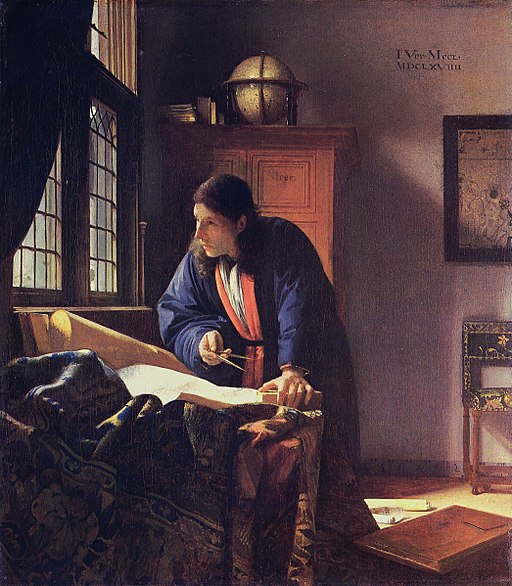 “The Geographer” by Johannes Vermeer

“The Geographer” by Johannes Vermeer is dressed in a Japanese-style robe, which was popular at the time with scholars.

The geographer has measured distances on a map, and now he has paused for thought.

Scientific analysis shows that Vermeer made several changes to this painting to enhance the feeling of energy in the picture.

The geographer’s head was initially in a different position with the man looking down, rather than peering out the window. The dividers he holds in his hand were initially vertical, not horizontal.

The man’s face is now slightly blurred, suggesting movement, his eyes are narrowed, to demonstrate deep thought. Vermeer has captured the moment in which the geographer is surveying the world in his imagination.

Vermeer has captured the perfect image of the Dutch Golden Age’s focus on global exploration and discovery. The globe and the map on the wall represent the state of the art in cartography.

These also symbolic of the Dutch leadership in the fields of navigation and exploration. Europe’s coastlines and the Indian Ocean are essential territories for the country’s maritime-trade-based economy.

This painting is closely related to Vermeer’s “The Astronomer”; he used the same model in the same dress, and the canvas for the two works came from the same bolt of material.

This painting is one of only three paintings Vermeer signed and dated; the other two are The Astronomer and The Procuress.

“Vermeer’s Geographer: A Moment of Insight”

The Geographer and the Astronomer

“The study of geography is about more than just memorizing places on a map. It’s about understanding the complexity of our world, appreciating the diversity of cultures that exists across continents. And in the end, it’s about using all that knowledge to help bridge divides and bring people together.”
– Barack Obama