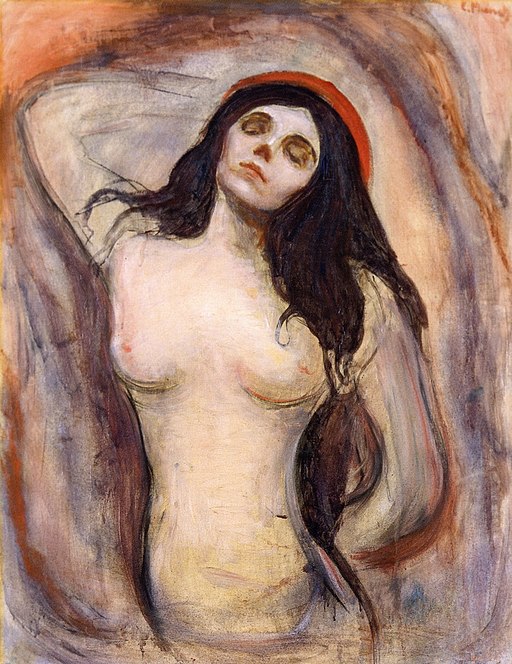 Madonna by Edvard Munch is the usual title for this composition. Munch painted several versions of the composition, showing a bare-breasted half-length female figure, between 1892 and 1895, using oils on canvas. He also produced versions in print form.

Munch used more than one title, including both “Loving Woman” and “Madonna.” Munch is not known for religious artwork and was not known as a Christian.

The emphasis in this painting is on the beauty and perfection of his friend and model for the work. It is also an expression of his worship of her as an ideal of womanhood.

Edvard Munch had to cope with mental illness during his life, and he experienced disappointment in love and his health.

It includes portrayals of attraction, courtship, realization, and disappointment.

The Kunsthalle Hamburg owns this version. Two other versions are owned by the National Gallery of Norway and the Munch Museum of Oslo. Private collections own different versions.

Edvard Munch (1863–1944) was a Norwegian painter and printmaker whose evocative treatment of psychological themes built upon Symbolism and greatly influenced German Expressionism in the early 20th century.

“A kiss is a secret told to the mouth instead of the ear;
kisses are the messengers of love and tenderness.”
– Ingrid Bergman