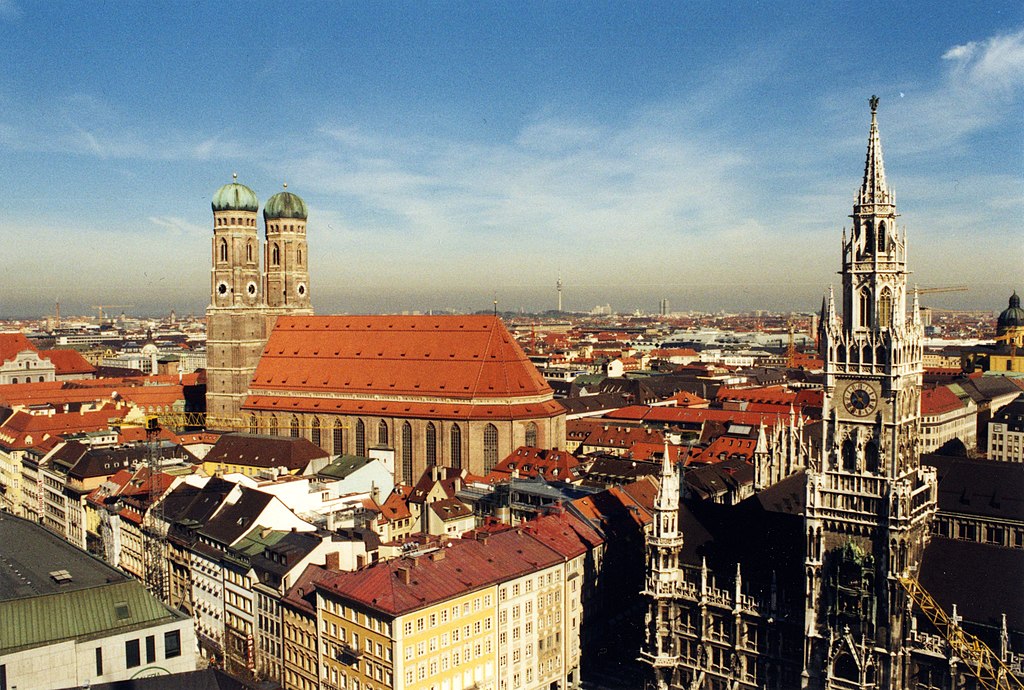 Munich is the capital of Bavaria, and it is the third-largest city of Germany after Berlin and Hamburg, as well as the 12th-largest city in the European Union.

Straddling the banks of the River Isar, a tributary of the Danube, it is the most densely populated municipality in Germany. The city is a major center of the arts, technology, finance, publishing, culture, and innovation in Germany.

The name of the city is derived from words meaning “by the monks” and relates to the monks of the Benedictine order. The monks ran a monastery at the place that was later to become the Old Town of Munich.

A monk is depicted on the city’s coat of arms and actively resisted the Reformation, and later Bavaria was established as a sovereign kingdom in 1806. With a strong independent spirit, Munich is the home to some of the great museums of the world.

The Alte Pinakothek is one of the oldest galleries in the world and houses a significant collection of Old Master paintings.

The name Alte (Old) Pinakothek refers to the time period covered by the collection, from the fourteenth to the eighteenth century.

The Neue Pinakothek is an art museum in Munich, Germany. Its focus is the European Art of the 18th and 19th centuries.

Together with the Alte Pinakothek and the Pinakothek der Moderne it is part of Munich’s “Kunstareal” (the “art area”).

The name Alte (Old) Pinakothek refers to the time period covered by the collection, from the fourteenth to the eighteenth century. The Pinakothek der Moderne exhibits modern art.

The Pinakothek der Moderne is a modern art museum, situated in Munich’s Kunstareal.

The Lenbachhaus houses an art museum in Munich’s Kunstareal, which is the museum’s quarter in the city center of Munich, Germany.

The Brandhorst Museum displays about 200 exhibits from the collection of modern art of the heirs of the Henkel trust Udo Fritz-Hermann and Anette Brandhorst.

The Brandhorst Collection comprises over 700 works.

The Glyptothek houses a significant collection of Greek and Roman sculptures and is part of the Kunstareal (“art district”), which is the museum quarter in the city center of Munich, Germany.

The museum’s building is in the neoclassical style and was built from 1816 to 1830. The Glyptothek is Munich’s oldest public museum.

The Glyptothek was commissioned by the Crown Prince, and the later King, Ludwig I of Bavaria, alongside other projects, such as the neighboring Königsplatz.

The building, which houses the State Collection of Greek and Roman Antiquities, was designed as a monument to ancient Greece.

He envisioned a “German Athens,” in which the ancient Greek culture would be remembered.

The Staatliche Antikensammlungen, which in English means “State Collections of Antiquities” is a museum with an extensive collection of antiquities from Greece, Etruria, and Rome.

The museum is housed in a neo-classical building with Corinthian columns. It was established in 1848 and located across from the sculpture museum, called the Glyptothek.

The museum building was severely damaged by bombing in World War II but was reconstructed and reopened to the public in the late 1960s.

The sculpture collection is located in the Glyptothek Museum, and Ancient Egypt also has its museum called Staatliche Sammlung für Ägyptische Kunst.

The Staatliches Museum Ägyptischer Kunst is the State Museum of Egyptian Art and contains the Bavarian state collection of Ancient Egyptian art.

The museum exhibits from both the predynastic and dynastic periods from Egypt. Also, it houses a Middle East section, which displays objects from the areas of Assyrian and Babylonian culture.

The Kunsthalle of the Hypo-Kulturstiftung, also known as Kunsthalle München or Hypo-Kunsthalle specialises in award-winning temporary exhibitions.

It is one of the most visited exhibition venues in Munich. The Kunsthalle does not have its own art collection, it organizes several temporary exhibitions each year, and in the last 30 years, it has hosted over 100 exhibitions.

Deutsches Museum – German Museum of Masterpieces of Science and Technology

The Deutsches Museum in Munich, Germany, is officially titled: German Museum of Masterpieces of Science and Technology.

Founded in 1903, it is the largest museum in Munich. The museum’s permanent exhibits cover all the areas of significance in Science and Technology.

The leading site of the Deutsches Museum is a small island in the Isar river, in addition to the main site on the Museumsinsel, the museum has two branches in and near Munich and one in Bonn.

The Flugwerft Schleißheim branch is located some 18 kilometers north of Munich’s city and is based on the premises of one of the first military airbases in Germany founded just before World War I.

The Deutsches Museum Verkehrszentrum, located at Theresienhöhe in Munich, and focuses on transportation technology.

Map of Museums in Munich

“I don’t have plans, I only have goals.”
– German Proverb