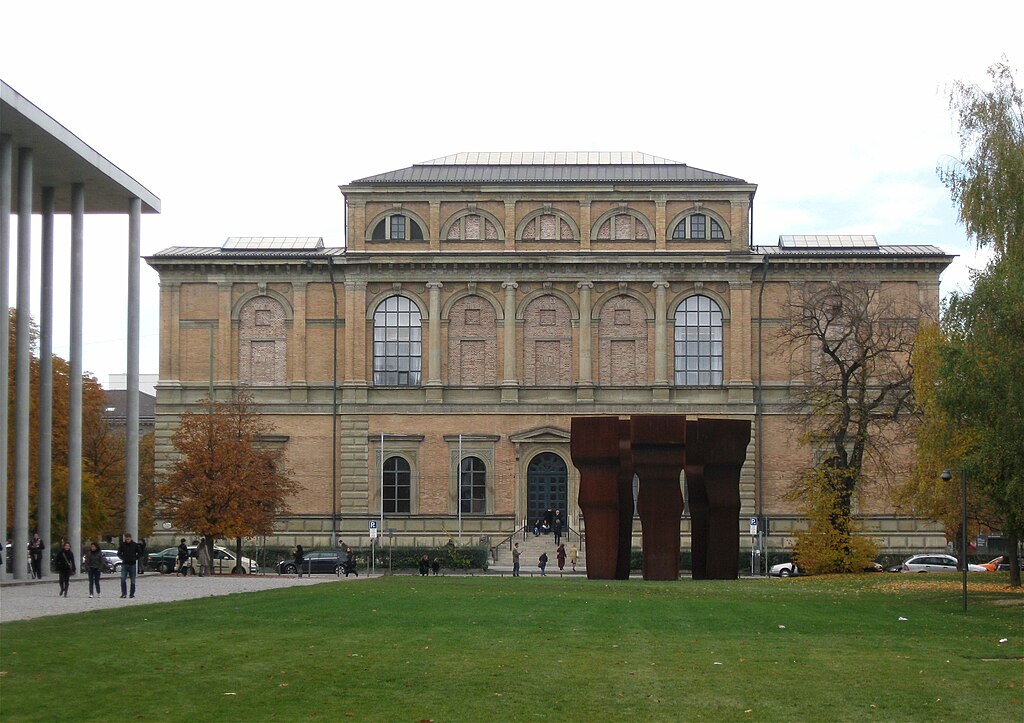 The Alte Pinakothek is one of the oldest galleries in the world and houses a significant collection of Old Master paintings.

The name Alte (Old) Pinakothek refers to the time period covered by the collection, from the fourteenth to the eighteenth century.

Virtual Tours of the Alte Pinakothek

Over 800 paintings are exhibited at the Old Pinakothek in the following categories:

Highlights Tour of the Alte Pinakothek

“The Mystical Marriage of Saint Catherine” by Lorenzo Lotto

“The Mystical Marriage of Saint Catherine” by Lorenzo Lotto depicts Catherine, who, at a young age, had a vision of the Madonna and Child, which persuaded her to become a Christian.

Lotto’s 1508 oil on panel painting shows an Italian Renaissance image of Catherine on the left worshipping the vision of the Madona and the Christ Child. On the right of the picture is the hermit, who led her to Christianity.

The legend of St. Catherine of Alexandria tells how as a princess and scholar, while in search of a husband equal to her nobility and knowledge, is referred by a hermit to Christ.

“Odysseus and Nausicaa” by Pieter Lastman

“Odysseus and Nausicaa” by Pieter Lastman depicts the shipwrecked Odysseus, who is found naked by Nausicaa and her entourage.

Throughout Homer’s Odyssey, during Odysseus’ return journey home from the Trojan wars, he encounters many monsters, misadventures, and unfriendly people.

However, he also had some significant encounters, and his meeting with Nausicaa was one of good fortune. Nausicaa was the daughter of the Phaeacian King and Queen, who were wise and just rulers.

Nausicaa is surprised to see Odysseus. However, unlike her companions, she does not take refuge from the unclothed stranger. She offers to help Odysseus when he begs for aid on the beach.

“Portrait of Madame de Pompadour” by François Boucher depicts the chief mistress of Louis XV from 1745 to 1751, who remained influential in the French royal court favorite until her death.

Through her position as court favorite, Pompadour wielded considerable power and influence; she was elevated in 1752, to Duchess, and in 1756 to a Lady-in-Waiting to the Queen, the noblest rank possible for a woman at court.

Pompadour effectively played the role of the prime minister, becoming responsible for the advancements and dismissals, and contributing to domestic and foreign politics.

Madame de Pompadour was also an influential patron of the arts, who played a central role in making Paris the perceived capital of taste and culture in Europe.

“Madonna of the Carnation” by Leonardo da Vinci

Madonna of the Carnation depicts the young Virgin Mary seated with Baby Jesus on her lap. Mary is shown wearing precious clothes and jewelry, and in her left hand, Mary holds a red carnation.

The Baby Jesus is reaching for the red carnation symbolizing blood and the Passion. Their faces and hands are in the light while all other objects are darker, a shadow covers even the carnation.

The child is looking up, and the mother is looking down with little eye contact. The setting of the portrait is a room with two windows on each side of the figures, with Da Vinci’s usual vastness of the mountain scenery on the far horizon.

The Madonna and Child was a common motif in Christian art during the Middle Ages. Da Vinci’s depiction of Madonna of the Carnation is relatively conventional and similar to those by other artists of the same period.

“Honeysuckle Bower” by Peter Paul Rubens is a self-portrait of the Flemish Baroque painter and his first wife. They were married in 1609, in St. Michael’s Abbey, Antwerp, shortly after he had returned to the city after eight years in Italy.

Rubens was 32 years old when he married the 18-year-old Isabella Brant, and this portrait was created shortly after their wedding. Isabella was the daughter of the humanist and lawyer, Jan Brant, one of the secretaries of Antwerp.

The painting is a full-length double portrait of the couple seated in a bower of honeysuckle.

“Battle of the Amazons” by Peter Paul Rubens

“Battle of the Amazons” by Peter Paul Rubens depicts a battle of the warlike women called Amazons from Ancient Greek mythology.

In this depiction, the Amazons are losing the fight with the Greek horsemen charging headlong into combat and the Amazons falling in defeat.

Rubens has created a whirlwind composition that is a dazzling Baroque masterpiece.

Rubens’s artistic narrative is anchored around the arch of the bridge, which forms a center that encircles the flow of movement of the combatants.

The surging movement throws the opposing forces together with the Amazons being hurled from their horses down into the river.