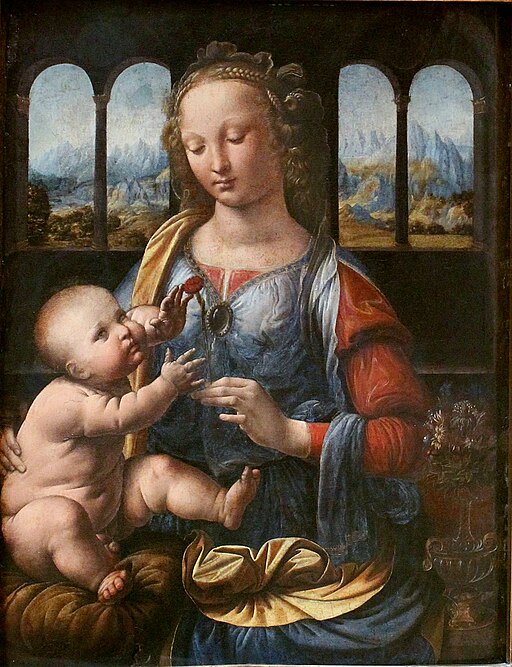 “Madonna of the Carnation” by Leonardo da Vinci

Madonna of the Carnation depicts the young Virgin Mary seated with Baby Jesus on her lap. Mary is shown wearing precious clothes and jewelry, and in her left hand, Mary holds a red carnation.

The Baby Jesus is reaching for the red carnation symbolizing blood and the Passion. Their faces and hands are in the light while all other objects are darker; a shadow covers even the carnation.

The child is looking up, and the mother is looking down with little eye contact. The portrait is set in a room with two windows on each side of the figures, with Da Vinci’s usual vastness of the mountain scenery on the far horizon.

The Madonna and Child was a common motif in Christian art during the Middle Ages. Da Vinci’s depiction of Madonna of the Carnation is relatively conventional and similar to those of other artists.

However, Da Vinci shows the baby Jesus active and interacting with the Madonna rather than asleep and cradled as he is in many other depictions of the time. Also, Jesus is portrayed as a human infant, rather than a deity.

This approach makes this painting relatable and recognizable as a mother with a child. This painting is the only work by Leonardo, which is permanently on display in Germany.

This painting is also known as the “Munich Madonna” or the “Madonna with the Vase” due to the vase of flowers sitting beside her.

Unfortunately, this Da Vinci painting has poorly deteriorated due to previous restoration efforts.

Madonna of the Carnation is an inspiring example of Da Vinci’s early work. Da Vinci created this work while working in the Florentine workshop of Andrea del Verrocchio, which he joined at the age of 14.

He completed his qualifications at the age of 20, about the time of this painting, but remained loyal to Verrocchio and continued to practice in his workshop for several more years, before setting out on his own.

The Florentine influence can be seen in the richness of the drapery. Also, Leonardo da Vinci’s emerging style is shown in the mountain peaks that fade into the sky.

The softness of the Child’s and mother’s flesh, the depiction of the flowers, and the gem fastening the Virgin’s gown all reveal Leonardo’s future stamp.

Historians regard Leonardo as the prime example of the “Universal Genius” or “Renaissance Man.” An individual of unsatisfied curiosity and creative imagination.

He considered one of the most diversely talented individuals ever to have lived.

Leonardo was born out of wedlock to notary Piero da Vinci and a peasant woman named Caterina in Vinci in the region of Florence.

He was educated in the studio of Florentine painter Andrea del Verrocchio. Much of his earlier working life was spent in the service of Ludovico il Moro in Milan.

He later worked in Rome, Bologna, and Venice, and he spent his last years in France at a home awarded to him by Francis I of France.

Madonna of the Carnation