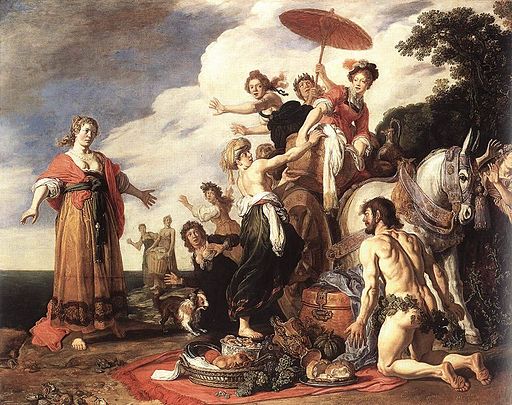 “Odysseus and Nausicaa” by Pieter Lastman

“Odysseus and Nausicaa” by Pieter Lastman depicts the shipwrecked Odysseus, who is found naked by Nausicaa and her entourage.

Throughout Homer’s Odyssey, during Odysseus’ return journey home from the Trojan wars, he encounters many monsters, misadventures, and unfriendly people.

However, he also had some significant encounters, and his meeting with Nausicaa was one of good fortune. Nausicaa was the daughter of Phaeacian King and Queen, who were wise and just rulers.

Nausicaa is surprised to see Odysseus. However, unlike her companions, she does not take refuge from the unclothed stranger. She offers to help Odysseus when he begs for aid on the beach.

According to Homer’s Odyssey, Odysseus’ raft, which he made to sail home after his adventure with Calypso, was destroyed by Poseidon, just off the Phaeacian island Scyrus.

Odysseus swam to shore, where he meets Nausicaa, who is washing clothes with her companions. Nausicaa’s friends are frightened, but Nausicaa is unfazed.

Odysseus begged Nausicaa for help and was later warmly welcomed at court and, equipped with a new boat so he could continue his journey home.

The naked Odysseus, who was the great hero of the Trojan war, is depicted in an all too human role. Lastman’s detailed work and the realism of the narrative impact would have impacted a young Rembrandt student.

Lastman’s pictorial structure, the individual gestures, and pathos are theatrical, and the setting itself is charged with meaning.

The artist has taken a highly original approach in placing the figures, with their gestures of surprise and fright and their outstretched arms, against a pale sky.

The impression is that a historical event is being played by specific persons, as though in a dramatic role. This painting foreshadows the emergence of Dutch historical art from masters like Rembrandt and Jan Lievens, who were his students.

In Book Six of the Odyssey, Nausicaä and her handmaidens go to the sea-shore to wash clothes. Odysseus emerges from the forest completely naked, scaring the servants away, and begs Nausicaä for aid.

Nausicaä gives Odysseus some of the clothes to wear and takes him to the edge of the town. Realizing that rumors might arise if Odysseus is seen with her, she and the servants go ahead into town.

But first, she advises Odysseus to go directly to Nausicaä’s mother, Arete, who is known as wise and trusted by the King. Odysseus follows this advice and wins Arete’s approval, and is received as a guest by the King.

During his stay, Odysseus recounts his adventures to the royal court. This recounting forms a substantial portion of the Odyssey. The king then provides Odysseus with the ships that finally takes him home to Ithaca.

Nausicaä is young and very pretty, and Odysseus says that she resembles a goddess, particularly Artemis.

Homer gives a literary account of love never expressed, making this episode one of the earliest examples of unrequited love in literature.

While she is presented as a potential love interest to Odysseus, no romantic relationship takes place.

However, Odysseus never tells his wife, Penelope, about his encounter with Nausicaä.

Of all the women Odysseus met on his long journey home, the suggestion is that he had the deepest level of feeling for the Nausicaä.

In his paintings, Lastman paid careful attention to the faces, hands, and feet.

Pieter Lastman was born in Amsterdam, but between 1604 and 1607, he visited Italy, where he was influenced by Caravaggio and by Adam Elsheimer.

Because Rembrandt never visited Italy, he was likely influenced by Caravaggio mainly via Lastman.

Odysseus and Nausicaa – A Long and Difficult Journey, The Odyssey

“There is nothing more admirable than when two people who see eye to eye keep house as man and wife, confounding their enemies and delighting their friends.”
– Homer, The Odyssey