“Dying Warrior” – Pediment Sculpture from the Temple of Aphaia

The Greeks idolize heroes who had fallen in war. To die on the battleground was a great honor, and it was depicted with courage and strength in their art. When a hero died, The Greeks believed that they become immortal because they had proved themselves to the gods.

The marbles are also beautifully finished on the back surfaces of the figures; even though the back of the pediment sculptures was not visible to the human eye, they were visible to the Greek gods.

This marble sculpture is part of a collection of marbles from the Late Archaic temple of Aphaia, comprising the sculptural groups of the east and west pediments of the temple, which are on display in the Glyptothek of Munich.

These works exerted a strong influence on Neoclassicism art and architecture in Munich and Germany. The influence was similar to the impact that the Acropolis Marbles in the British Museum had on British artists and architects.

Each pediment centered on the figure of Athena, with groups of combatants, fallen warriors, and arms filling the decreasing angles of the sediments.

The theme shared by the pediments was the greatness of Aigina, as shown by the exploits of its local heroes in the two Trojan wars, one led by Heracles against Laomedon and a second led by Agamemnon against Priam.

The sculptures preserve extensive traces of an elaborate paint scheme and are crucial for the study of painting on ancient sculpture.

The Temple pedimental sculptures illustrate the change from Archaic to Early Classical technique.

Both of these sculptures of the Archaic and the Early Classical technique are on display in the Glyptothek of Munich.

The Temple of Aphaia is located within a sanctuary complex dedicated to the goddess Aphaia on the Greek island of Aigina, which lies in the Saronic Gulf.

The great Doric temple was a favorite of the neoclassical and romantic artists such as J. M. W. Turner. It stands on a 160 m peak on the eastern side of the island.

Aphaia was a Greek goddess who was worshipped exclusively at this sanctuary. The surviving temple from about 500 BC was built over the remains of an earlier temple, which was destroyed by fire.

The elements of this destroyed temple were buried in the infill for the more extensive, flat terrace of the later temple, and are thus well preserved. 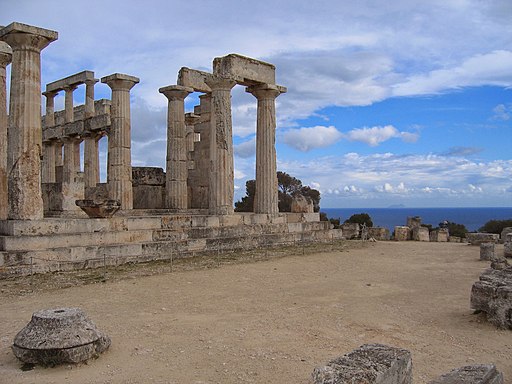 Temple of Aphaia on the island of Aegina near Athens, Greece

In Greek mythology, Laomedon was a Trojan king. He was the father of the legendary King Priam of Troy.

Heracles mustered an army of noble volunteers and sailed for Ilium to attack the city. Laomedon marched against Greeks, but being repulsed by the troops of Heracles, Laomedon was besieged.

The siege once laid, Telamon was the first to breach the wall and enter the city, and after him Heracles. When the son of Zeus had taken the city he shot down Laomedon.

“Dying warrior” – Pediment Sculpture from the Temple of Aphaia

A Tour of Greek Genius

The Temple of Aphaia at Aegina

“What you leave behind is not what is engraved in stone monuments, but what is woven into the lives of others.”
– Pericles