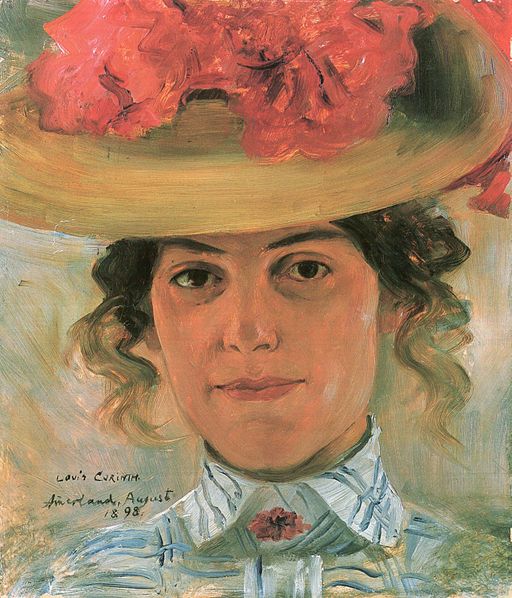 “Portrait of a Woman with Hat” by Lovis Corinth

In 1955, she received the Cross of Merit (Steckkreuz) of the Federal Republic of Germany, “For her special services to German literature.”

The artist Lovis Corinth (1858 – 1925) was a German artist who studied in Paris and Munich. His early work was naturalistic in approach.

In this portrait, he used vibrant colors to create a portrait of extraordinary vitality and power.

The realism of Corinth’s early works emphasized careful observation of colors and tones. Corinth was born Franz Heinrich Louis, but in 1888, he adopted the name “Lovis Corinth.” 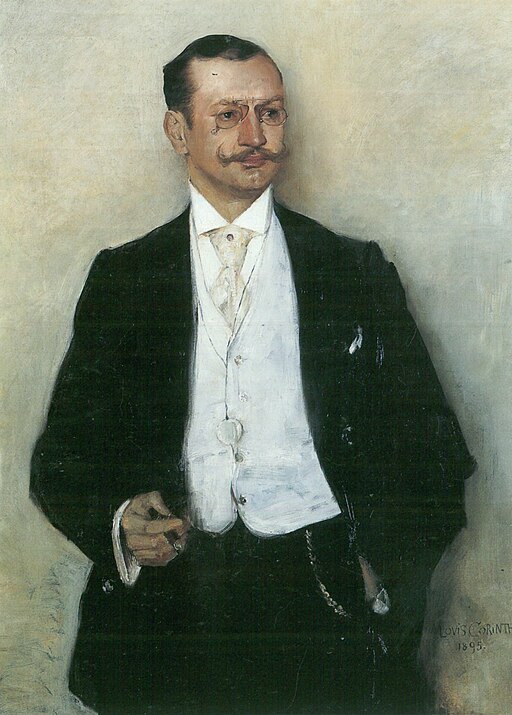 “Portrait of the painter Karl Strathmann” by Lovis Corinth depicts Carl Strathmann (1866 – 1939) a German painter and illustrator of Art Nouveau and symbolism.

Corinth wrote that “Strathmann, in his persistence, immerses himself in the ornamental patterns of his paintings down to the smallest detail and seeks to compose new motifs into the details.” 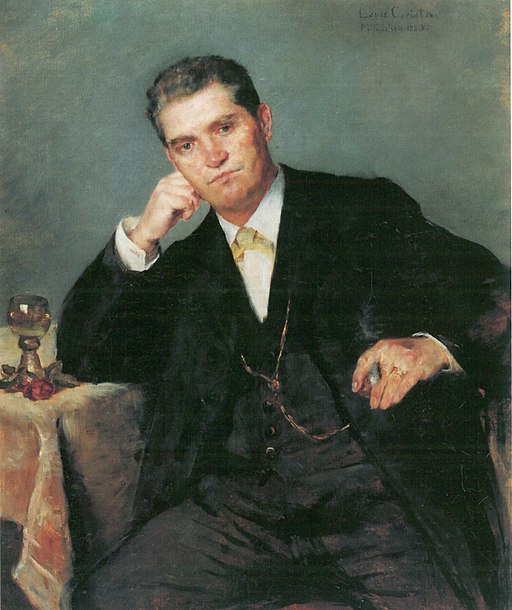 The painting shows the artist’s father, sitting in a chair at a table, in a frontal portrait, looking directly at the artist and the viewer.

He wears dark trousers with a dark waistcoat, a white shirt, and a dark coat. Above the vest is a gold watch chain and on his left hand, which wears a gold ring, he holds a cigar while resting his head on his right hand.

The right elbow rests on the table with a golden wine cup, and a red rose on a bright table covering. His father died five years after this painting. 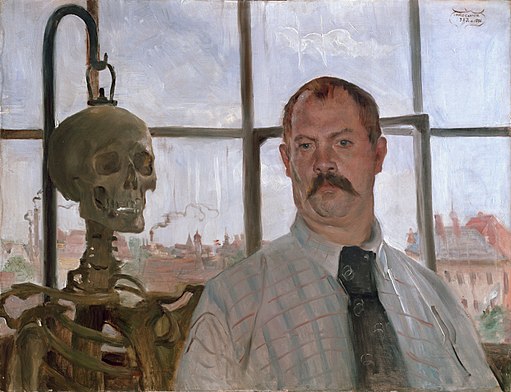 These nine years in Munich were not his most productive, and he became better known for his drinking.

Lovis Corinth (1858 – 1925) was a German artist and who worked as a painter and printmaker. He developed a style that was a synthesis of impressionism and expressionism.

Corinth studied in Paris and Munich and joined the Berlin Secession group. Corinth was initially antagonistic towards the expressionist movement.

However, after a stroke in 1911, his style loosened and took on many expressionistic qualities. Corinth’s use of color became more vibrant, and his art gained increased vitality and power.

In 1937, Nazi authorities removed 295 of his works from public collections and transported seven of them to Munich where they were displayed in March 1937 in the Degenerate Art Exhibition.

The Nazis held the Degenerate Art Exhibition in Munich in 1937, which displayed 650 modernist artworks. T

he art was deliberately hung chaotically and in a disparaging manner. They also had accompanying labels that deriding the art.

Several of Lovis Corinth’s artworks were labeled Degenerate Art and shown at the Degenerate Art Exhibition, such as Self-portrait with Model and Innocence.

After the show, the paintings were mainly sold in Switzerland at auction to raise funds for Nazi causes. Museums acquired some pieces; private collectors purchased others. Ironically, high-ranking Nazi officials took many for their private use.

Hermann Göring took 14 valuable pieces, including a Van Gogh and a Cézanne. In 1939, the Berlin Fire Brigade burned about 4000 paintings, drawings, and prints that had little value on the international market.

This destruction of thousands of artworks was an act of unprecedented Art vandalism.

Degenerate Art – 1993, The Nazis vs. Expressionism