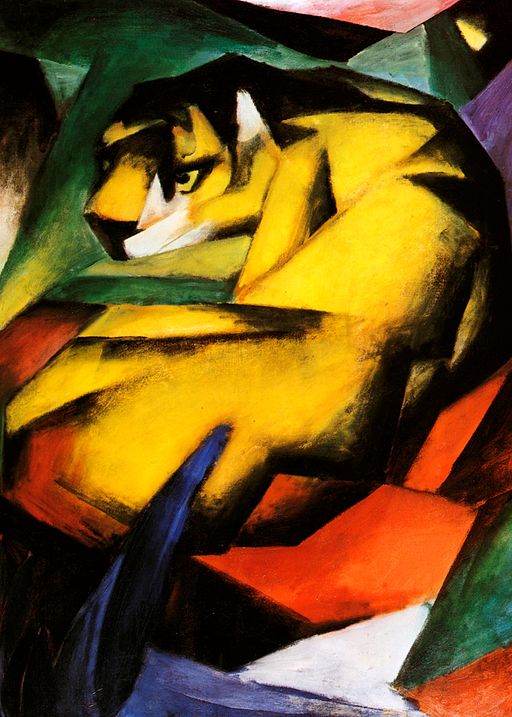 Tiger by Franz Marc is one of the artist’s several depictions of animals in the Expressionist style. Tiger demonstrates a sense of restlessness, tension, imminence, and anticipation.

The landscape is composed entirely of cubic forms rendered in bright luminous tones. The tiger is disturbed from its rest; its head has risen, its yellow eyes fixed upon its next prey or the impending danger.

The tiger’s strength is represented by intersecting shards of color and acute angles, which are contained within the bold, black outline.

The central motif of this painting is the tiger, surrounded by a colorful, jungle landscape. The tiger’s recognizable dark stripes characterize the picture on yellowish fur and the dynamic jungle background.

Tiger forms part of Marc’s formative phase, during which he became fascinated by futurism and cubism, in which he created art that was increasingly stark and abstract.

Marc’s Tiger shows the influence of Picasso’s cubism and Paul Cezanne. Cubism is used as a means of heightening realism and sentiment, together with Marc’s interest in bold, primary colors, and their potential to convey emotion is evident in this artwork.

Expressionism is a modernist movement, originating in Germany at the beginning of the 20th century. It presents the world from a subjective perspective, distorting it radically for the emotional effect to evoke moods or ideas.

Expressionist artists sought to express the meaning of emotional experience rather than physical reality. Expressionism developed as a new style before the First World War. It remained popular during the Weimar Republic, particularly in Berlin.

Franz Marc (1880 – 1916) was a German painter and printmaker, one of the key figures of German Expressionism. He was a founding member of Der Blaue Reiter (The Blue Rider), a journal whose name later became synonymous with the circle of artists collaborating in it.

Marc showed several of his works in the first Der Blaue Reiter exhibition in Munich between 1911 and1912. As it was the apex of the German expressionist movement, the exhibit also showed in Berlin, Cologne, Hagen, and Frankfurt.

By 1912, Marc became fascinated by futurism and cubism, and he created art that increasingly was stark and abstract. He painted The Tiger and Red Deer in 1912 and The Tower of Blue Horses, Foxes, and Fate of the Animals in 1913, in the years just before the Great War.

With the outbreak of World War I, Marc was drafted into the German Army as a cavalryman. By 1916, he had gravitated to military camouflage. His technique for hiding artillery from aerial observation was to paint canvas covers in a broadly pointillist style.

The German government identified notable artists to be withdrawn from combat for their safety. Marc was on the list but was struck in the head and killed instantly by a shell splinter during the Battle of Verdun in 1916 before orders for reassignment reach him.

“Whenever we have seen a crevice in the crust of convention, we have called attention to it, because we have hoped for a force underneath, which will someday come to light.”

“What appears spectral today will be natural tomorrow.”

“I never, for instance, have the urge to paint animals’ the way I see them,’ but rather the way they are… The way they look at the world and feel their being.” ‘

“Today, we are searching for things in nature that are hidden behind the veil of appearance… We look for and paint this inner, spiritual side of nature.”

“Blue is the male principle, stern, and spiritual. Yellow the female principle, gentle, cheerful, and sensual. Red is matter, brutal and heavy and always the color which must be fought and conquered by the other two.”

“Art will liberate itself from the needs and desires of men.”

“Today, art is moving in the direction of which our fathers would never even have dreamed. We stand before the new pictures as in a dream, and we hear the apocalyptic horsemen in the air.”

“I am trying to intensify my feeling for the organic rhythm in all things, trying to establish a pantheistic contact with the tremor and flow of blood in nature, in animals, in the air – trying to make it all into a picture, with new movements and with colors that reduce our old easel paintings to absurdity.”

“Serious art has been the work of individual artists whose art has had nothing to do with ‘style’ because they were not in the least connected with the style or the needs of the masses. Their works arose rather in defiance of their times.”

Our Animal Destinies: The Art of Franz Marc

“Is there a more mysterious idea than to imagine how nature is reflected in the eyes of animals?”
– Franz Marc