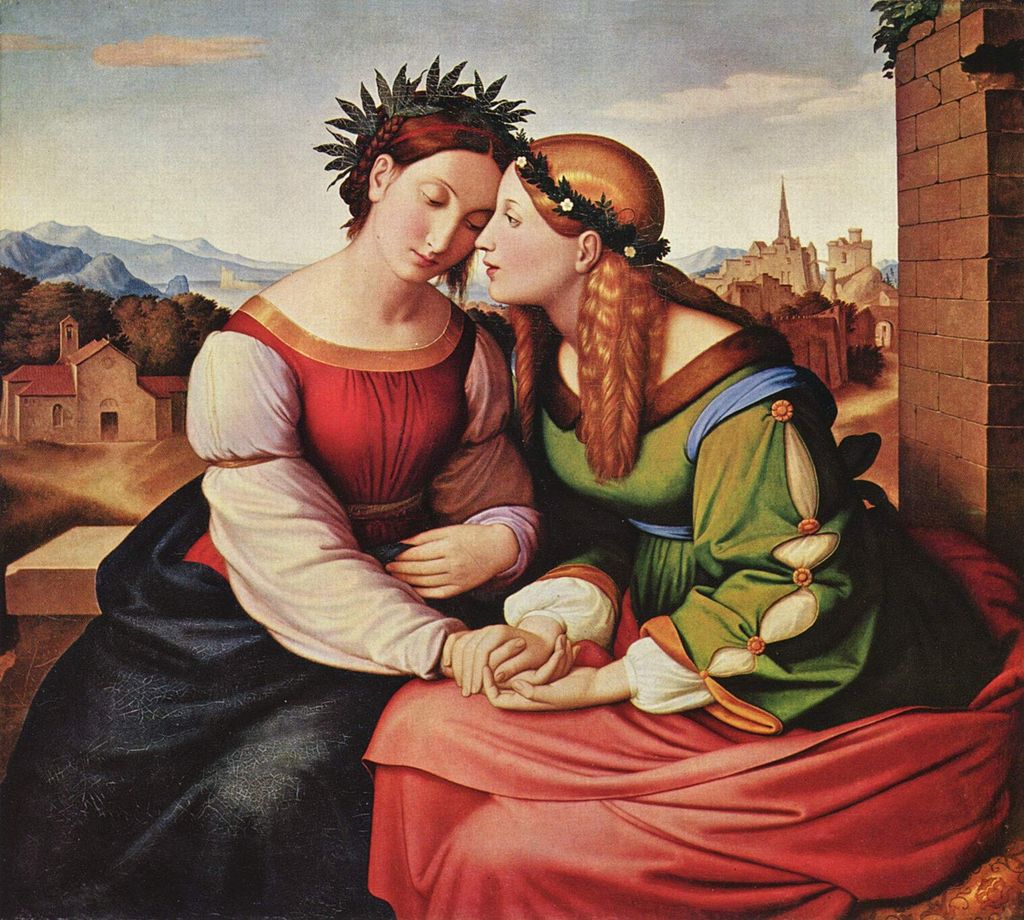 “Italia and Germania” by Friedrich Overbeck

“Italia and Germania” by Friedrich Overbeck depicts two young women facing each other in front of a landscape. The woman on the left has dark hair and wears a laurel wreath, while the woman with blond hair wears a floral wreathed.

On the left, the landscape is a typical Italian landscape with a rocky coast and a Roman basilica, while on the right a medieval towering German city.

The women’s hands are intertwined as a symbol of their friendship, and their faces express a warm relationship.

The two women are Italia and Germania and symbolize the connection between Northern Europe and Southern Europe.

Italia and Germania is an allegorical painting that symbolizes the friendship between these cultural regions.

The personifications of Italy and Germany are in the form of two women who are close friends.

At the time of the creation of the painting, both “Italy” and “Germany” were merely cultural and geographic terms for the many politically fragmented regions in central and southern Europe.

The nation-states of the Kingdom of Italy (1861) and the German Empire (1871) had not yet formed when this painting was created.

This painting was initially titled “Sulamith and Mary.” It was intended as a gift, by Overbeck, to a close friend who was also a painter and was to represent the two Christian brides Sulamith and Maria as the imaginary wives of the two painter friends.

After the early death of his friend at the age of 24, the execution of the painting ceased for the time being, and it was not until years later that Overbeck resumed the composition. But now the two women had become Italia and Germania.

Overbeck, who spent his life as a German in Rome, and his artist friends, sought to link painting back to religion and the state.

The medieval ideal of a religiously enshrined and revered painting became a model for them. Their vision was in contrast to the northern German romanticism movement. Their style became known as Nazarene art.

Nazarene art was a romantic-religious art movement founded by German artists in Vienna and Rome at the beginning of the 19th century.

Many representatives of this style converted to the Catholic faith. The aim of the Nazarenes was the renewal of the arts in the spirit of Christianity, using old Italian and German masters as role models.

Johann Friedrich Overbeck (1789 – 1869) was a German painter and illustrator. He is one of the most significant figures in the renewal of German religious painting in the 19th century.

Overbeck played a crucial role in energizing Nazarene art, a romantic-religious art, founded by German artists in Vienna and Rome at the beginning of the 19th century.

“Italia and Germania” by Friedrich Overbeck