“The Acropolis at Athens” by Leo von Klenze

“The Acropolis at Athens” by Leo von Klenze depicts an idealized view of one the most influential set of buildings from ancient Greece, and Athens in particular.

The Acropolis at Athens has been the source of inspiration for architects from the classical period to modern times. In the foreground is a crowd listening to a sermon by Apostle Paul in Athens.

Klenze’s depicts his vision of integrating the classical Greek culture with Christianity. The morning sun on the Apostle Paul and the Acropolis is symbolic of the beginning of a new epoch.

The artist Leo von Klenze was an architect for the Court of the Bavarian King, Ludwig I. The King’s passion for Hellenism shaped the architectural style of von Klenze.

This painting demonstrates Klenze’s expertise and knowledge of the significant historical monuments in Athens.

After the archaeological exploration of the Athens Acropolis had started in the 1830s, knowledge about the Acropolis site exploded.

Klenze’s view in this painting is an ideal reconstruction based on the then known facts.

It shows the configuration of the site during the time of Roman rule in the 1st century AD at the time of the visit by the Apostle Paul to Athens and not the Greek classical high point at the time of Pericles.

The Areopagus sermon refers to a sermon delivered by Apostle Paul in Athens, at the Areopagus, and recounted in Acts 17:16–34.

The Areopagus sermon is one of the most dramatic and extensive speeches by Saint Paul and was delivered on a prominent rock outcrop located northwest of the Acropolis in Athens, called the Areopagus.

Paul’s preaching in Thessalonica, northern Greece, had created conflict, so he was taken to Athens as a place of safety.

However, in Athens, Paul was distressed to see the city full of idols, and Paul went to the synagogue and the Agora on several occasions to preach about the Resurrection of Jesus. 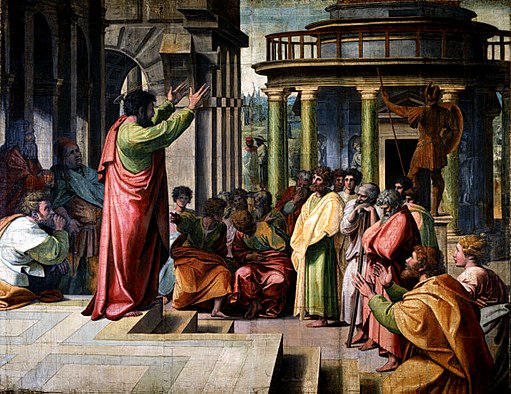 Athens was an education center for the Roman world, a place where philosophy was honored, and philosophical discourse never ceased.

As interest in his ideas grew, some Greek philosophers took him to a meeting at the Areopagus, the high court in Athens, to explain himself.

The Areopagus was a center of temples, cultural facilities, and a high court. The philosophers in Athens were puzzled by Christ and his resurrection—such doctrines were “strange things to our ears.” (Acts 17:20.)

However, after the sermon, several people became followers of Paul.

The Route that Apostle Paul Followed in Greece included the following centers:

Leo von Klenze (1784 – 1864) was a German neoclassicist architect, painter, and writer. Court architect of Bavarian King Ludwig I, he was one of the most prominent representatives of Greek revival style.

Russian Emperor Nicholas I commissioned von Klenze in 1838 to design a building for the New Hermitage, to house the Romanov collection of antiquities, paintings, coins and medals, cameos, prints and drawings, and books.

Before this, von Klenze had also designed and arranged museum galleries in Munich, including the Glyptothek, Ludwig I’s museum for antique sculpture, and the Alte Pinakothek, a painting gallery for the painting collection.

The Acropolis at Athens

“Now, while Paul was waiting for them at Athens, his spirit was provoked within him as he saw that the city was full of idols.”
– Acts 17:16