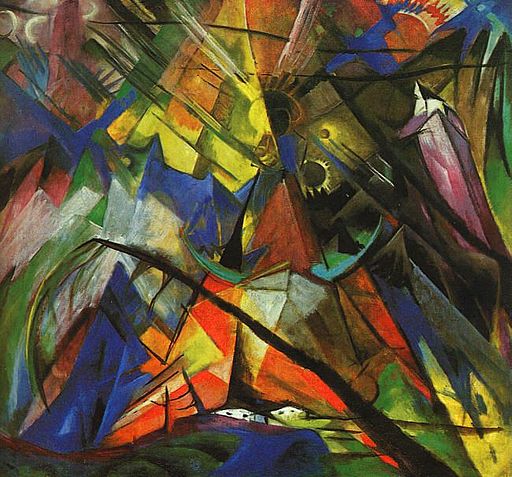 “Tyrol” by Franz Marc is one of his final artworks painted before his death at the age of 36, during the Battle of Verdun. It is a dark departure from his previous playful works, such as the “The Yellow Cow.”

Tyrol is a scene of cataclysmic destruction, in which the heavens have parted, and an exploding world rains down destruction on a defenseless village. Two small white cottages are shown on a hill, low on the canvas, next to two dead trees.

In the foreground is another thin, burnt tree stump that sweeps diagonally across the canvas. The branches of this tree form a giant scythe symbolizing death.

A year after “Tyrol” was painted, Marc added the motif of the “Woman of the Apocalypse” immediately above the diagonal tree, indicating that a rebirth of humanity would follow the destruction of the evil society, the motif spoke of the coming “Age of Righteousness.”

Marc was a  symbolist painter who used mythological and dream imagery. The symbols used in symbolism are not the familiar emblems of mainstream iconography but intensely personal, private, obscure, and ambiguous references.

More a philosophy than an actual style of art. The colors in the painting are symbolically representing the objects in the artwork. The Russian painter Wassily Kandinsky greatly influenced Marc’s use of color in this work.

Franz Marc worked with Kandinsky in the formation of the Blue Rider (Der Blaue Reiter) group of like-minded artists.

The group released the “The Blue Rider Almanac” and held two exhibits. More of each were planned, but the outbreak of World War I in 1914 ended these plans.

Kandinsky returned to Russia via Switzerland and Sweden. Marc was drafted into the German Army, where he designed military camouflage and painted tarpaulin covers in styles varying “from Manet to Kandinsky,” to conceal troops and equipment from enemy aircraft.

The name Tyrol references the region of the eastern Alps in current-day western Austria and northern Italy. The Tyrol continually passed back and forth between various states.

German Tyrol includes mostly ethnic German areas of historical County of Tyrol: the Austrian state of Tyrol and the province of South Tyrol but not the primarily Italian-speaking region of Trentino.

Its present division was created by the Treaty of St. Germain, which was concluded after the end of World War I.

Expressionism is a modernist movement, originating in Germany at the beginning of the 20th century. It presents the world from a subjective perspective, distorting it radically for the emotional effect to evoke moods or ideas.

Expressionist artists sought to express the meaning of emotional experience rather than physical reality. Expressionism developed as a new style before the First World War. It remained popular during the Weimar Republic, particularly in Berlin.

Franz Marc (1880 – 1916) was a German painter and printmaker and one of the key figures of German Expressionism. He was a founding member of Der Blaue Reiter (The Blue Rider), a journal whose name later became synonymous with the circle of artists collaborating in it.

Marc showed several of his works in the first Der Blaue Reiter exhibition in Munich between 1911 and1912.

Our Animal Destinies: The Art of Franz Marc -1

Our Animal Destinies: The Art of Franz Marc – 2

Franz Marc Fate of the Animals

“What appears spectral today will be natural tomorrow.”

“I never, for instance, have the urge to paint animals’ the way I see them,’ but rather the way they are… The way they look at the world and feel their being.” ‘

“Today, we are searching for things in nature that are hidden behind the veil of appearance… We look for and paint this inner, spiritual side of nature.”

“Blue is the male principle, stern, and spiritual. Yellow the female principle, gentle, cheerful, and sensual. Red is matter, brutal and heavy and always the color which must be fought and conquered by the other two.”

“Today, art is moving in the direction of which our fathers would never even have dreamed. We stand before the new pictures as in a dream, and we hear the apocalyptic horsemen in the air.”

“Is there a more mysterious idea than to imagine how nature is reflected in the eyes of animals?”

“The great artists do not seek their forms amid the past but take the deepest soundings they can of the genuine, most profound of their age.”

“Serious art has been the work of individual artists whose art has had nothing to do with ‘style’ because they were not in the least connected with the style or the needs of the masses. Their works arose rather in defiance of their times.”