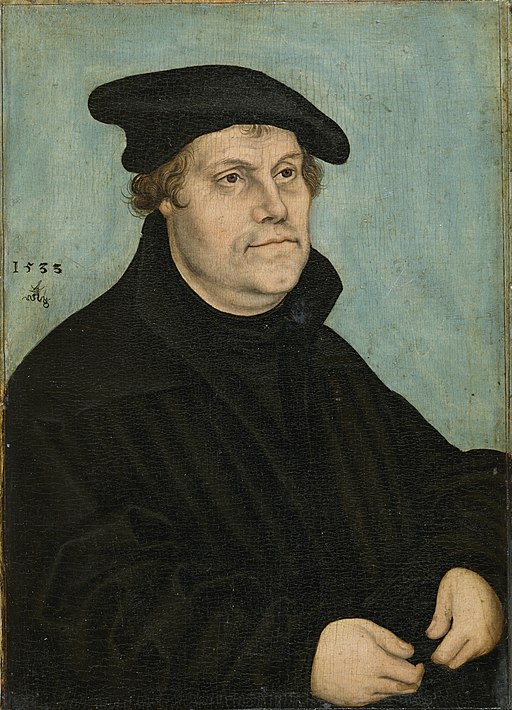 “Portrait of Martin Luther” by Lucas Cranach the Elder

“Portrait of Martin Luther” by Lucas Cranach the Elder shows the Protestant Reformer in a three-quarter profile, wearing the distinctive black Protestant vestments.

This painting on beech wood from 1533 was created by Lucas Cranach, the Elder, who was a close friend of Martin Luther and, therefore, a very accurate depiction.

Cranach was the court painter to the electors of Saxony in Wittenberg, an area in the heart of the emerging Protestant faith.

His patrons were influential supporters of Martin Luther, and Cranach used his art to support the new faith. Cranach made numerous portraits of Luther and provided woodcut illustrations for Luther’s German translation of the Bible.

The oldest reference to Cranach in Luther’s correspondence dates from 1520.

Cranach first made an engraving of Luther in 1520, when Luther was an Augustinian friar. Five years later, Luther renounced his religious vows, and Cranach was a witness at the betrothal festival of Luther and Katharina von Bora.

He was also godfather to their first child, Johannes “Hans” Luther, born 1526.

Martin Luther (1483 – 1546) was a German professor of theology, composer, priest, monk, and an influential leader in the Protestant Reformation.

Luther was ordained to the priesthood in 1507. He came to reject several teachings and practices of the Roman Catholic Church, in particular, he disputed its view on indulgences.

Luther’s refusal to renounce his writings at the demand of Pope Leo X and the Holy Roman Emperor Charles V at the Diet of Worms in 1521 resulted in his ex-communication by the Pope.

He was condemnation as an outlaw by the Holy Roman Emperor.

Luther taught that salvation and eternal life are not earned by good deeds but are received as the gift of God’s grace through the believer’s faith in Jesus Christ as redeemer from sin.

His theology challenged the authority and office of the Pope by teaching that the Bible is the only source of divinely revealed knowledge.

Luther’s translation of the Bible into the German vernacular made it more accessible, an event that had a tremendous impact on both the church and German culture.

His hymns influenced the development of singing in Protestant churches. His marriage to Katharina von Bora, a former nun, set a model for Protestant clergy to marry.

Lucas Cranach the Elder (1472 – 1553) was a German Renaissance painter and printmaker in woodcut and engraving.

He was a court painter to the Electors of Saxony and is famous for his portraits of German princes and those of the leaders of the Protestant Reformation, whose cause he embraced.

He was a close friend of Martin Luther, and he is commemorated in the liturgical calendars of the Episcopal and Lutheran churches.

Cranach had a large workshop, and many of his works exist in different versions. His son Lucas Cranach the Younger, and others continued to create versions of his works for decades after his death.

He is considered the most successful German artist of his time.

Luther and the Reformation

Renaissance & Reformation: German Art in the Age of Dürer and Cranach

“Even if I knew that tomorrow the world would go to pieces, I would still plant my apple tree.”

“There is no more lovely, friendly, and charming relationship, communion, or company than a good marriage.”

“I have held many things in my hands, and I have lost them all; but whatever I have placed in God’s hands, that I still possess.”

“Every man must do two things alone; he must do his own believing and his own dying.”

“For what God gives, I thank indeed; What He withholds I do not need.”

“Anyone who is to find Christ must first find the church. How could anyone know where Christ is and what faith is in him unless he knew where his believers are?”

“A Christian is never in a state of completion but always in the process of becoming.”

“God writes the Gospel not in the Bible alone, but also on trees, and in the flowers and clouds and stars.”

“I cannot and will not recant anything, for to go against conscience is neither right nor safe. Here I stand, I can do no other, so help me God. Amen.”

“Let the wife make the husband glad to come home and let him make her sorry to see him leave.”

“Everything that is done in the world is done by hope.”

“God does not need your good works, but your neighbor does.”

“Next to the Word of God, the noble art of music is the greatest treasure in the world.”

“Whoever drinks beer, he is quick to sleep; whoever sleeps long, does not sin; whoever does not sin, enters Heaven! Thus, let us drink beer!”

“To be a Christian without prayer is no more possible than to be alive without breathing.”

“God writes the Gospel not in the Bible alone,
but also on trees,
and in the flowers and clouds and stars.”
– Martin Luther