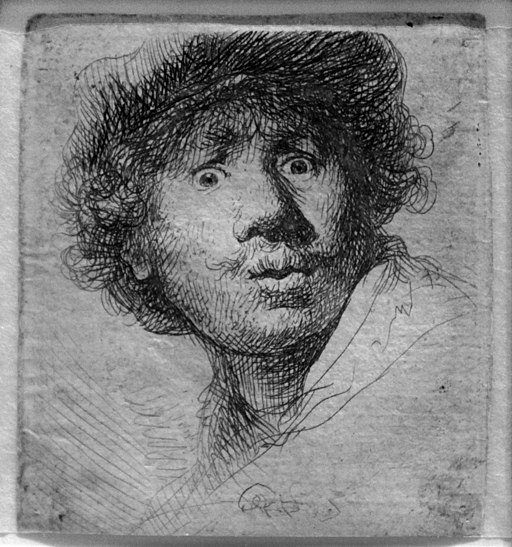 “Wide-Eyed Self-Portrait” by Rembrandt is one of the many self-portrait etchings made by the master. This example was a study of expressions that features the shameless, dominant feature of all Rembrandt’s self-portraits, his nose.

In this etching, Rembrandt was studying an expression assumed to be a wide-eyed surprised look. He was about twenty-four years old in this depiction.

Overall, Rembrandt created about eighty self-portraits consisting of over forty paintings, thirty-one etchings, and about seven drawings. The self-portraits form a visual diary of the artist over the forty years of his career.

There was a gradual shift from etchings, more numerous until the 1630s, to paintings, which became more common after that.

Rembrandt’s 31 self-portrait etchings can be divided into several categories. There are official self-portraits of himself intended for sale and distribution. There are some abandoned attempts at such portraits.

There are etching studies and etching technique experiments. There are studies in expression, such as in this example, and there are studies with Rembrandt’s features in historical costume.

Rembrandt’s self-portraits form a unique and intimate biography, in which he surveyed himself without vanity and with genuine sincerity.

Rembrandt’s self-portraits were created by the artist looking at himself in a mirror, in which case the paintings and drawings reverse his actual features.

In the etchings, the printing process creates an inverted image, and the prints, therefore, show Rembrandt in the same orientation as he would appear to a viewer in person.

Documents related to Rembrandt’s life make several references to the many mirrors he brought and sold.

Rembrandt’s significant contribution to the history of printmaking was his transformation of the etching process from a relatively new reproductive technique into a pure art form.

His reputation as one of the greatest etcher of the medium was established in his lifetime. Few of his paintings left the Dutch Republic during his lifetime, but his prints did circulate throughout Europe, and his more extensive reputation was initially based on them alone.

As a method of printmaking, it is, along with engraving, the most important technique for old master prints. In traditional pure etching, a metal plate is covered with a waxy ground which is resistant to acid.

The artist then scratches off the ground with a pointed etching needle where he or she wants a line to appear in the finished piece, so exposing the bare metal. The plate is then dipped in a bath of acid.

The acid dissolves part of the metal where it is exposed, leaving behind lines sunk into the plate. The remaining ground is then cleaned off the plate. The plate is inked all over, and then the ink wiped off the surface, leaving only the ink in the etched lines.

The plate is then put through a printing press together with a sheet of paper. The paper picks up the ink from the etched lines, making a print.

The process can be repeated many times; typically, several hundred impressions could be printed before the plate shows much sign of wear. Etching has often been combined with other techniques such as engraving, which Rembrandt used extensively.

The process of printmaking is believed to have been invented about 1500 in Germany by a craftsman who decorated armor in this way and then applied the method to printmaking, using metal plates.

The oldest dated art etching was by Albrecht Dürer in 1515, but the 17th century was the great age of engraving, with Rembrandt’s significant contributions to the field.

How Rembrandt Made His Etchings