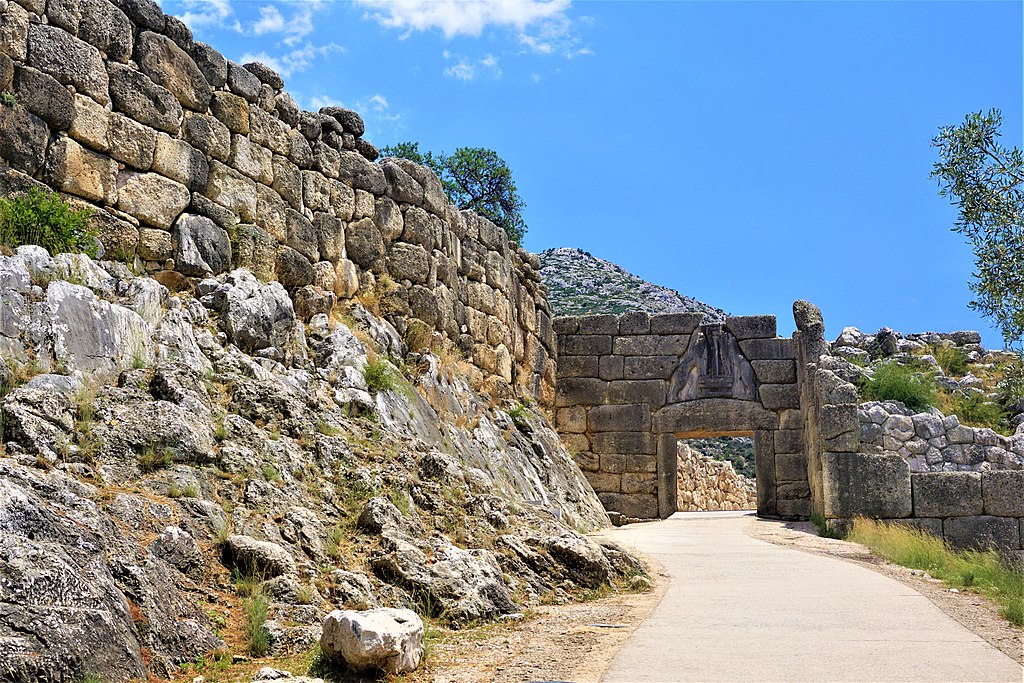 Ancient Mycenae is an archaeological site in north-eastern Peloponnese, Greece. Mycenae was founded about 1350 BCE, approximately 90 kilometers (56 miles) south-west of Athens on a hill rising 900 feet above sea level.

Ancient Mycenae was a major center of Greek civilization and a military stronghold, which was a dominant power during Bronze Age Greece.

Mycenae, an acropolis site, was ideally positioned to be a center of power to command the Isthmus of Corinth with a strong defensive and strategic position. 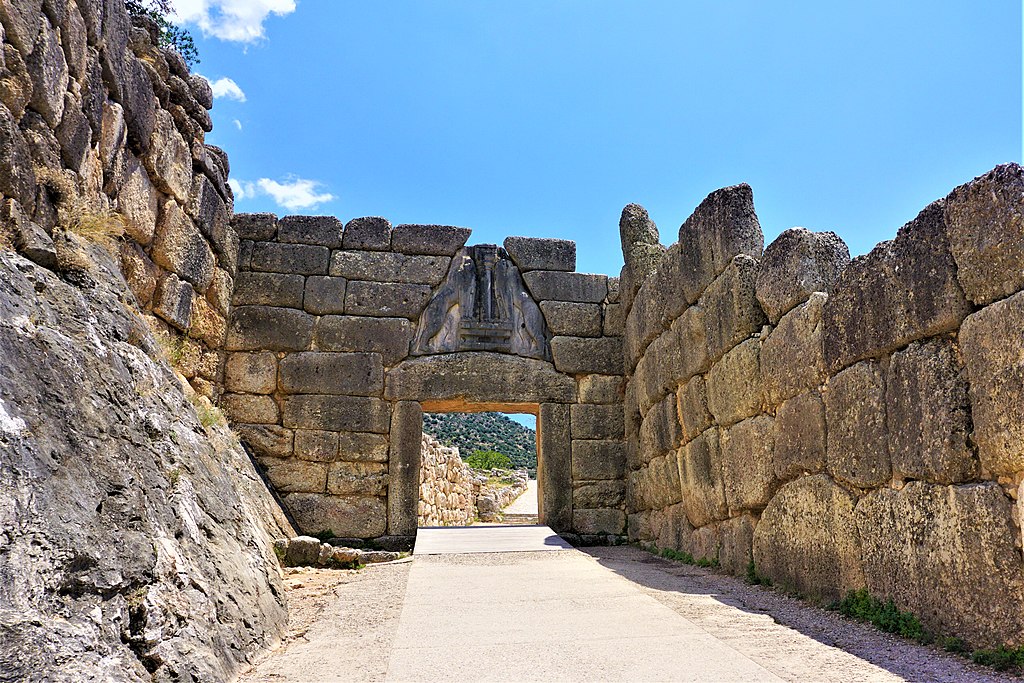 The Lion Gate was the main entrance of the Bronze Age citadel of Mycenae in southern Greece. It was erected around 1250 BC and is named after the relief sculpture of two lionesses or lions in a heraldic pose that stands above the entrance.

The Lion Gate is the only surviving monumental piece of Mycenaean sculpture and has been described in the literature of classical antiquity.

The opening had a double door, and the gate consists of two great monoliths capped with a colossal lintel. Above the lintel is a triangular limestone slab on which the two lions are carved stand on either side of a central pillar.

The heads of the animals are missing, and the pillar is a Minoan-type column of an altar-like platform.

The Lion Gate had stood in full view of visitors to Mycenae for centuries. It was mentioned in the 2nd century AD, and the first identification of the Lion Gate in modern literature was in 1700.

In 1840 the first clearing of the site from debris and soil that had accumulated to bury it took place.

In the second millennium BC, Mycenae was one of the major centers of Greek civilization, a military stronghold that dominated much of southern Greece.

The period of Greek history from about 1600 BC to about 1100 BC is called Mycenaean in reference to Mycenae. By 1200 BC, the power of Mycenae was declining, and finally, Mycenaean dominance collapsed entirely.

The eventual destruction of Mycenae formed part of the general Bronze Age collapse in the Greek mainland and beyond. Within a short time around 1200 BC, all the palace complexes of southern Greece were burned, including that at Mycenae.

The depictions of lion hunting scenes have been found on a dagger in Mycenae, Greece, from 16th century BC.

Aristotle, in the 4th century BC, provided some insights into lion distribution, behavior, breeding, and also anatomy.

According to him, lions were more numerous in North Africa than in Europe, and they only approached towns or attacked people if they were old and could not hunt in the wild. 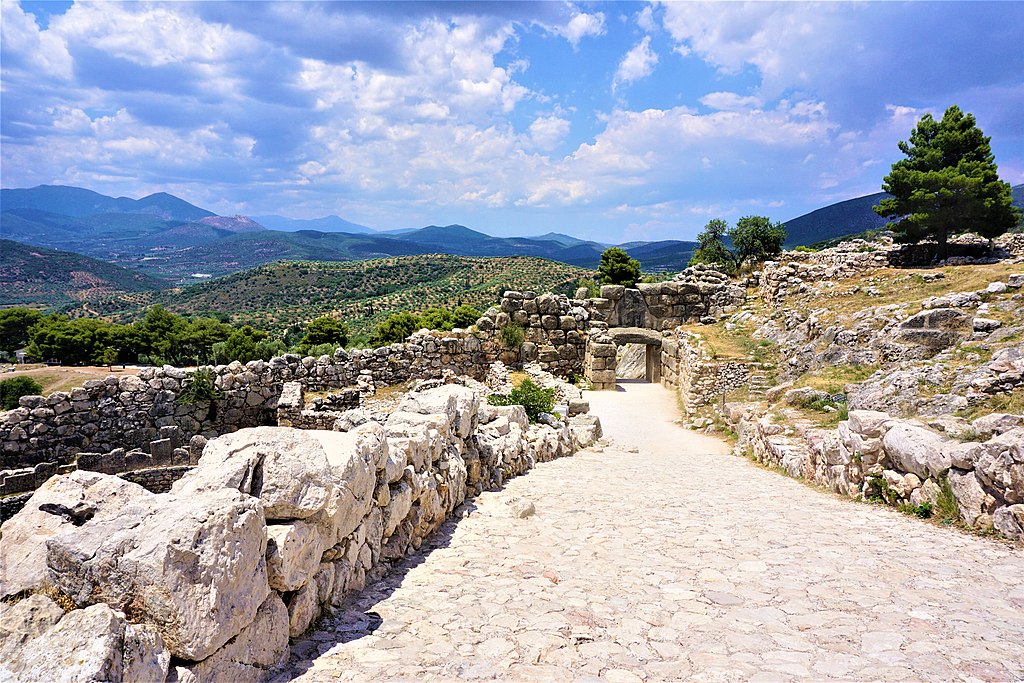 Above is the Lion Gate entrance, as seen from inside the Bronze Age citadel of Mycenae in southern Greece.

It was erected around 1250 BC and is named after the relief sculpture of two lionesses or lions in a heraldic pose that stands above the entrance.

The Mycenae Grave Circle A is a 16th-century BC royal cemetery near the main entrance of the Bronze Age citadel of Mycenae.

This burial complex was initially constructed outside the fortification walls of Ancient Mycenae but was later enclosed in the fortress that was built on the high ground or acropolis when the fortifications were extended during the 13th century BC.

The circle has a diameter of 27.5 m (90 ft) and has six shaft graves, where nineteen bodies were buried.

Bronze Age Greece 16th century BCE Mycenaean shaft tombs would range from 1.0 m to 4.0 m with a mound constructed for each grave and stelae erected.

Among the objects found were a series of gold death masks and full sets of weapons, ornate staffs, as well as gold and silver cups.

The Lion Tholos Tomb at Mycenae 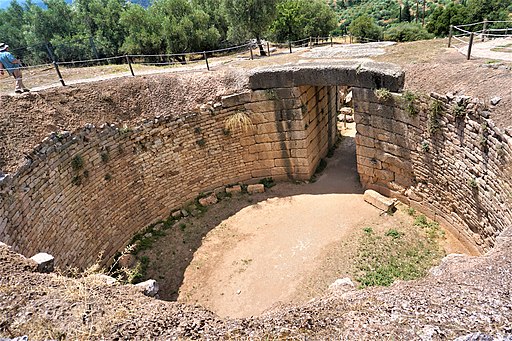 View of the Lion Tholos Tomb at Mycenae from above

A  tholos tomb, also known as a beehive tomb, is a burial structure characterized by its false dome created by the superposition of successively smaller rings of mudbricks or, more often, stones. 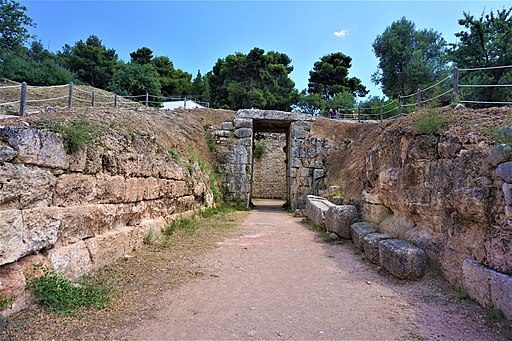 View of the Lion Tholos Tomb at Mycenae from the entrance

This tomb is named the Lion Tholos Tomb for its proximity to the Lion Gate of Mycenae. It was built in the early 14th c. BCE and it was about 15 meters tall, but has now collapsed and has no ceiling.

The latest kings and queens at Mycenae were buried in tholos tombs.

They were similar in design to chamber tombs except that they were built out of stone blocks and then covered with earth, rather than hollowing out a hillside to construct a chamber tomb.

Northeast Extension of the Mycenae Citadel

This shows the third and last Northeast Extension of the Mycenae Citadel completed in the late 13th century BC.

It was an essential addition to secure the water supply and involved the underground cistern. The corbelled opening led to the outside of the citadel.

Underground Cistern of the Mycenae Citadel 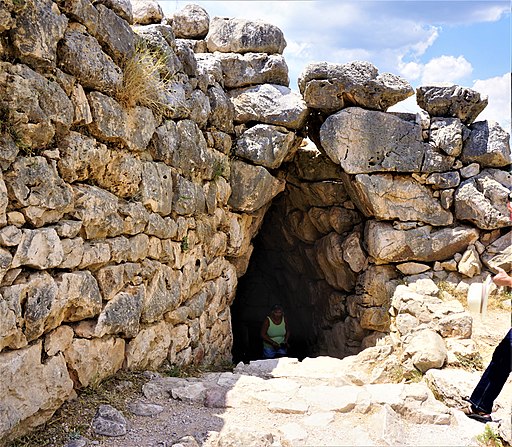 Corbelled Arch to the Underground Cistern

This subterranean cistern is one of the most exciting constructions of Mycenaen building technology.

The descent into the underground water cistern is corbelled, and at the end of the excavated underground passage at a depth of 18 meters is the roofed shaft to the water.

This subterranean construction secured the water supply of the citadel and was the reason for the last extension of the northeast section of the fortified walls.

A Virtual Tour of Ancient Greece