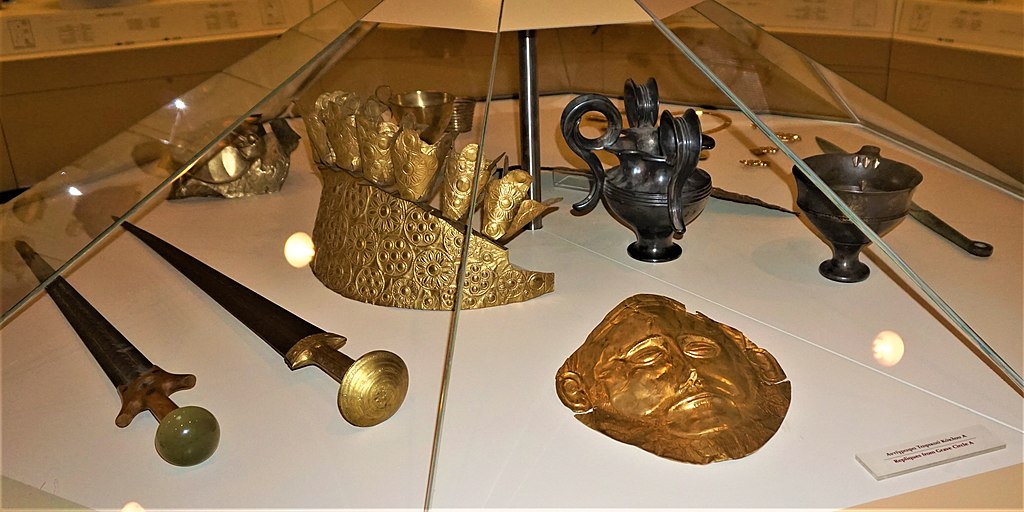 The Mycenae Grave Circle A Artifacts are from a 16th-century BC royal cemetery near the main entrance of the Bronze Age citadel of Mycenae in southern Greece.

This burial complex was initially constructed outside the fortification walls of Ancient Mycenae. It was later enclosed in the fortress, built on the high ground or acropolis when the fortifications were extended during the 13th century BC.

These grave goods signified the royal dynasty’s economic power and prestige, which depended on long-distance sea trade for some of these prized goods.

Many of the artifacts displayed in this picture are replicas of originals protected and preserved at the National Archaeological Museum, Athens.

The circle has a diameter of 27.5 m (90 ft) and has six shaft graves, where nineteen bodies were buried. Bronze Age Greece 16th century BCE  Mycenaean shaft tombs would range from 1.0 m to 4.0 m with a mound constructed for each grave and stelae erected.

Among the objects found were a series of gold death masks and full sets of weapons, ornate staff, and gold and silver cups.

The site was excavated by the archaeologist Heinrich Schliemann in 1876. According to Greek mythology, one of the gold masks he unearthed became known as “The Death Mask of Agamemnon,” a mythological ruler of Mycenae.

The site of Mycenae was the first in Greece to be subjected to a modern archaeological excavation. It has since been demonstrated that the burials in Grave Circle A date from 16th century BC, before the traditional time of the Trojan War (13th-12th century BC), in which Agamemnon participated.

In the second millennium BC, Mycenae was one of Greek civilization’s major centers, a military stronghold that dominated much of southern Greece. The period of Greek history from about 1600 BC to about 1100 BC is called Mycenaean after Mycenae.

By 1200 BC, the power of Mycenae was declining, and finally, Mycenaean dominance collapsed entirely. The eventual destruction of Mycenae formed part of the general Bronze Age collapse in the Greek mainland and beyond.

Within a short time, around 1200 BC, all the palace complexes of southern Greece were burned, including Mycenae.

A Tour of Mycenae

Greece, Mycenae Grave Circle A and B