The Acropolis of Athens is located on a rocky outcrop above the city of Athens and has been an ancient citadel since time immemorial. The Acropolis has several ancient buildings of architectural and historical significance.

The word Acropolis is from the Greek phrase Akron, which means “highest point, extremity” and polis, meaning “city.”

Although the term acropolis is generic, the Acropolis of Athens is of such significance that it is commonly known as “The Acropolis” without further description.

The Acropolis was inhabited as far back as the 4th millennium B.C.

It was during Greece’s’ golden period when Pericles (c. 495 – 429 BC) organized the construction of the site’s current buildings, including the Parthenon, the Propylaia, the Erechtheion and the Temple of Athena Nike.

The Parthenon was a temple dedicated to the goddess Athena. It was constructed over 2,500 years ago when the state of Athens was at the peak of its power.

The Athenians built the Parthenon as a celebration of their pan-Hellenic victory over the Persian invaders. It was also a thanksgiving to the gods for that victory. The Parthenon replaced an older temple of Athena that was destroyed by the Persian in 480 BC.

The first destruction of the Acropolis was due to the Roman invasion of Athens when successive Roman generals looted the Parthenon.

Later became incorporated into the Byzantine Empire when the Parthenon was converted into a Christian church dedicated to the Virgin Mary. 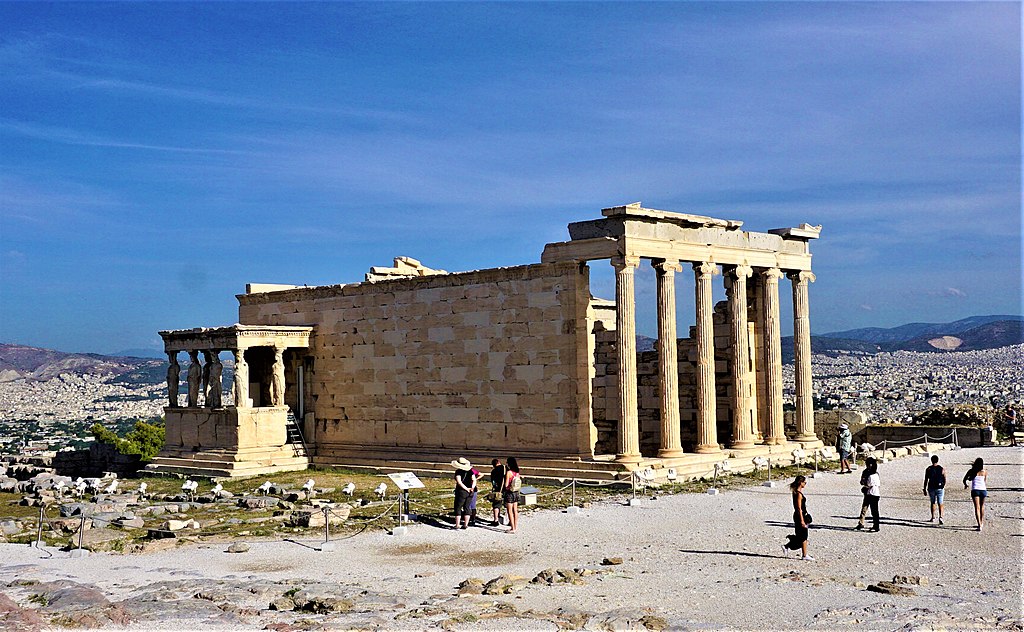 The Erechtheion is an ancient Greek temple on the Acropolis of Athens in Greece, which was dedicated to Athena and Poseidon. The sculptor of the structure was Phidias.

He was employed by Pericles to build both the Erechtheum and the Parthenon. The Erectheum was constructed between 421 – 406 BC and associated with some of the most ancient and holy relics of the Athenians.

It was built entirely of marble with friezes of black limestone, which bore sculptures executed in relief in white marble. It had elaborately carved doorways and windows.

Its columns were ornately decorated. There are three porches, on the north and east side, the porches have Ionic columns.

The third on the south side facing the Parthenon, is the famous “Porch of the Maidens,” with six draped female figures called Caryatids or Karyatis as supporting columns.

The Erechtheion was burnt and plundered by the Roman general Sulla during the Roman invasion of Athens. It was later repaired and reformed in the 1st century B.C.

The building was then altered again during the early Byzantine period when it was transformed into a Christian church dedicated to Mary, the Mother of God.

Later following further innovations, it became a palace under Frankish rule, and after the Ottoman occupation, it became the residence of the Turkish commander’s harem.

In 1800 one of the Caryatids and a column of the east porch, together with sections of the entablature, were removed by Lord Elgin. He took them to decorate his Scottish mansion.

They were later sold to the British Museum, where they can be seen today. During the Greek War of Independence, the building was bombarded by the Ottomans and severely damaged, the ceiling of the north porch was blown up together with a large section of the internal walls.

Thanks to restoration efforts, today, it is miraculous to be able to see this glory of Ancient Athens in this historic building.

Porch of the Caryatids

Porch of the Caryatids

The Porch of the Caryatids is part of the Erechtheion, which is an ancient Greek temple on the Acropolis of Athens in Greece, which was dedicated to Athena and Poseidon.

The Erectheum was constructed between 421 – 406 BC. On the south side of the Erechtheion facing the Parthenon, is the famous “Porch of the Maidens,” with six draped female figures called Caryatids as supporting columns.

The porch was initially intended to be more massive and imposing. Unfortunately, it was drastically reduced in size and budget after the onset of the Peloponnesian war.

The six draped female figures are called caryatids, and they serve as an architectural support taking the place of a column or a pillar supporting an entablature on her head.

Their bulky, intricately arranged hairstyles serve the purpose of providing support to their necks, which would otherwise be the thinnest and structurally weakest part.

The Romans copied the Erechtheion caryatids, installing copies in the Forum of Augustus and the Pantheon in Rome, and at Hadrian’s Villa at Tivoli.

Another Roman example, found on the Via Appia, is the Townley Caryatid exhibited at the British Museum. In 1800 one of the Caryatids was removed by Lord Elgin to decorate his Scottish mansion.

It was later sold to the British Museum, where they can be seen today. In modern times, the practice of integrating caryatids into building facades was revived. They can be found in many classical buildings.

They also made their way into building interiors; they began to be employed in fireplaces.

Today the original Caryatids of Erechtheum are not at the Temple on the Acropolis; they are replicas. The original surviving Caryatids are in The Acropolis Museum for their protection, conservation, and restoration.

“How great are the dangers I face to win a good name in Athens.”
– Alexander the Great

“Athens, the eye of Greece, mother of Arts and Eloquence.”
– John Milton

“A great city, whose image dwells in the memory of man, is the type of some great idea. Rome represents conquest; Faith hovers over the towers of Jerusalem; and Athens embodies the pre-eminent quality of the antique world, Art.”
– Benjamin Disraeli

“So far has Athens left the rest of mankind behind in thought and expression that her pupils have become the teachers of the world.”
– Panegyricus

“Let there be light! Said Liberty, And like sunrise from the sea, Athens arose!”
– Percy Bysshe Shelley

“I am a citizen, not of Athens, or Greece, but of the world.”
– Socrates

“If Athens shall appear great to you, consider then that her glories were purchased by valiant men, and by men who learned their duty.”
– Pericles

“Many of our ideas of democracy, so much of our literature and philosophy and science, can be traced back to roots right here in Athens.”
– Barack Obama

“Earth proudly wears the Parthenon As the best gem upon her zone.”
– Ralph Waldo Emerson

“Now while Paul waited for them at Athens, his spirit was stirred in him, when he saw the city wholly given to idolatry.”
– Bible

Secrets of the Acropolis | Blowing Up History

360° Explore the ancient Acropolis in Athens

“Athens, the eye of Greece, mother of Arts and Eloquence.”
– John Milton