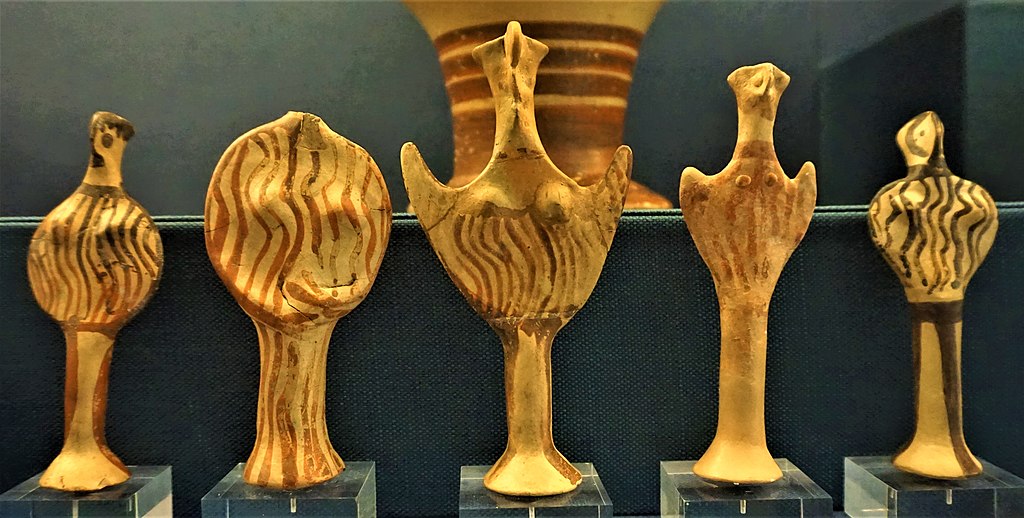 These Mycenaean figurines date back to about 1400 BC from Mycenaean Greece. Made of terracotta, they were found in tombs, children’s graves, shrines, and across settlement areas.

These terracotta female figures of ‘Phi’ and ‘Psi’ type derive the names from their shape and a resemblance to the Greek letters of psi (ψ) and phi (Φ). The Psi (ψ) figures hold their arms up high in some form of supplication.

The phi (Φ) figures hold their hands in front of their body as representative figures to be honored. These Mycenaean terracotta female figures are modeled with breasts, facial features, and they wear painted enveloping garments.

The functions of these figurines are not certain. It has been suggested that their purpose changed with the context in which they were found.

Suggested uses include votive figurines, grave offerings, and figures of Goddess or Priestess for shrines.

Mycenaean figurines like these have been discovered together with Mycenaean pottery, and they seem to have played a significant role in the history of Mycenaean culture and religion.

Over five hundred figurines have been excavated from ancient sites such as cemeteries, settlements, and shrines.

Written Mycenaean records mention various priests and priestesses who were responsible for shrines and temples.

Priestesses were prominent figures in society, and the role of Mycenaean women in religious festivities was also important.

A universal Mycenaean religion is reflected in archaeological evidence with the Mycenaean Terracotta Female Figures that have been found all over Late Bronze Age Greece.

Mycenaean Greece was dominant in the last phase of the Bronze Age (1600 – 1100 BC.) in Greece and represents the first advanced civilization in mainland Greece, with its palatial states, urban organization, works of art and writing system.

The most prominent site was Mycenae, after which the culture of this era is named. Mycenaean Greece was dominated by an elite warrior society and consisted of a network of palace states that developed rigid hierarchical, political, social, and economic systems.

A Tour of the Benaki Museum, Athens

The Mycenaeans The Real Civilization who fought the Trojan War

Explore the Museums in Athens

“Day by day, what you choose, what you think, and what you do is who you become.”
– Heraclitus (535-475 BCE) pre-Socratic Greek philosopher.