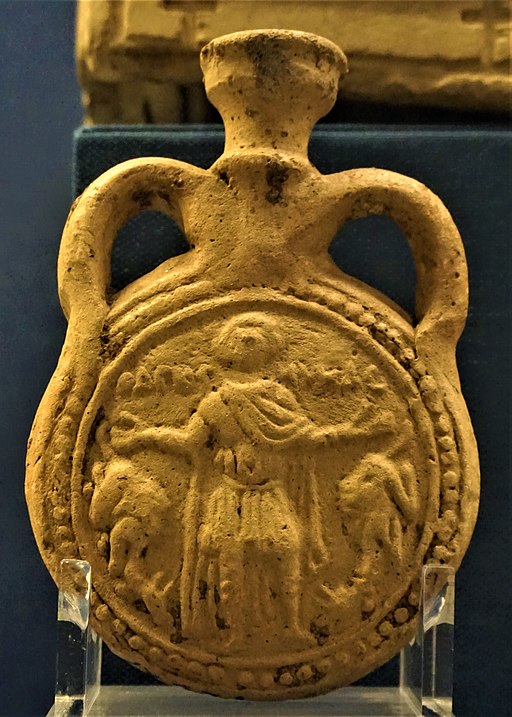 This ceramic Pilgrim’s Bottle was used for holy water or oil from the shrine of Saint Menas in Egypt. It was used by pilgrims who wanted to take blessed water or oil back to their relatives.

The Pilgrim’s flask depicts St Minas in supplication, with two kneeling camels on either side of his feet.  The camels represent the two camels who returned his body to Egypt for burial.

St. Menas is dressed in a soldier’s tunic, his arms extended in the early Christian pose of prayer. St. Menas was martyred in AD 296 and buried in the desert west of Alexandria in northern Egypt.

Pilgrims came to the saint’s shrine for the healing powers of its sacred oil, carried away in these small flasks.

Saint Minas (285 – c. 309) was a wonder-worker who became one of the most well-known Egyptian saints. He was credited with many miracles attributed to his intercession and prayers.

Sick people from all over the Christian world used to visit his shrine and were healed through the intercessions of Saint Mina.

Today, clay Menas flasks, on which the saint’s name and picture are stamped, are found in diverse countries around the Mediterranean world and beyond. He is the patron saint of merchants and caravans.

Minas was an Egyptian soldier in the Roman army martyred because he refused to recant his Christian faith. Legend has it that Menas’ sister brought his body to Alexandria, where she placed the saint’s body in a church.

When the time of persecution ended, Menas’ body was put on a camel to be taken to the Libyan Desert. At a particular spot near a water well at the end of Lake Mariout, not far from Alexandria, the camel stopped and wouldn’t move. T

he Christians took this a sign from God and buried Menas’ body there, and it became the location of his shrine many years later.

According to Orthodox Christian belief, in 1942, during the North-Africa WWII campaign, German forces made a halt near an ancient ruined church dedicated to Saint Menas.

During the first night of the engagement, at midnight, Saint Menas came out of his ruined church and appeared amid the German camp.

The saint was at the head of a caravan of camels, as was shown on the walls of the ruined church in the frescoes depicting his miracles.

This terrifying apparition so undermined German morale that it contributed to the brilliant victory of the Allies.

The Menas Flask: A Pilgrim’s Souvenir