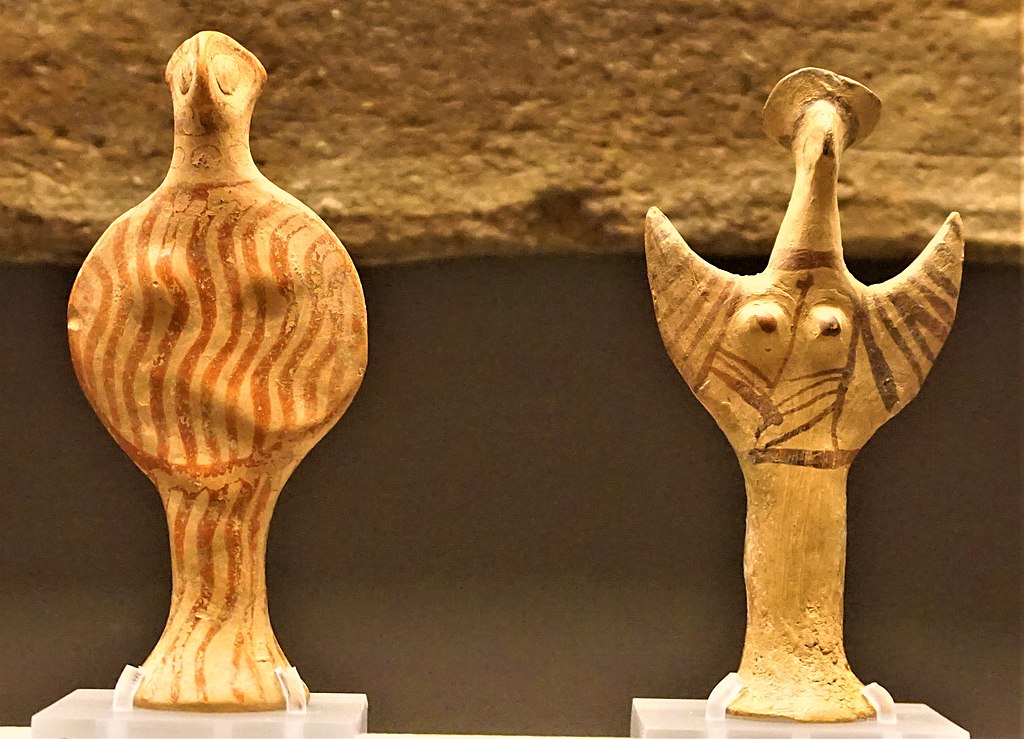 These ‘Phi’ and ‘Psi’ Type Mycenaean figurines date back to 1450-1100 BC in Mycenaean Greece. Made of terracotta, they were found in tombs, children’s graves, shrines, and settlement areas. They got their names from their shape and a resemblance to the Greek letters of psi (ψ) on the right and phi (Φ) on the left. These Mycenaean Terracotta Female Figures are modeled with breasts with enveloping garments.

The functions of these Mycenaean Female Figurines are unknown, although it has been suggested that their purpose changed with the context in which they were found. Suggested uses were as children’s toys, votive figurines, or grave offerings. Mycenaean figurines like these have been discovered with Mycenaean pottery and seem to have played a significant role in the history of Mycenaean culture and religion. Over five hundred figurines have been excavated from ancient sites such as cemeteries, settlements, and shrines.

Mycenaean Greece was the last phase of the Bronze Age in Greece, spanning the period from about 1600–1100 BC. It represented the first advanced civilization in mainland Greece, with its palatial states. Mycenaean Greece perished with the collapse of Bronze Age culture in the eastern Mediterranean, to be followed by the Greek Dark Ages, a transitional period leading to Archaic Greece. The Mycenaean period became the historical setting of much ancient Greek literature and mythology, including the Trojan Epic Cycle.

Written Mycenaean records mention various priests and priestesses who were responsible for shrines and temples. Priestesses were prominent figures in society, and the role of Mycenaean women in religious festivities was also important. A universal Mycenaean religion is reflected in archaeological evidence with the Mycenaean Terracotta Female Figures that have been found all over Late Bronze Age Greece.