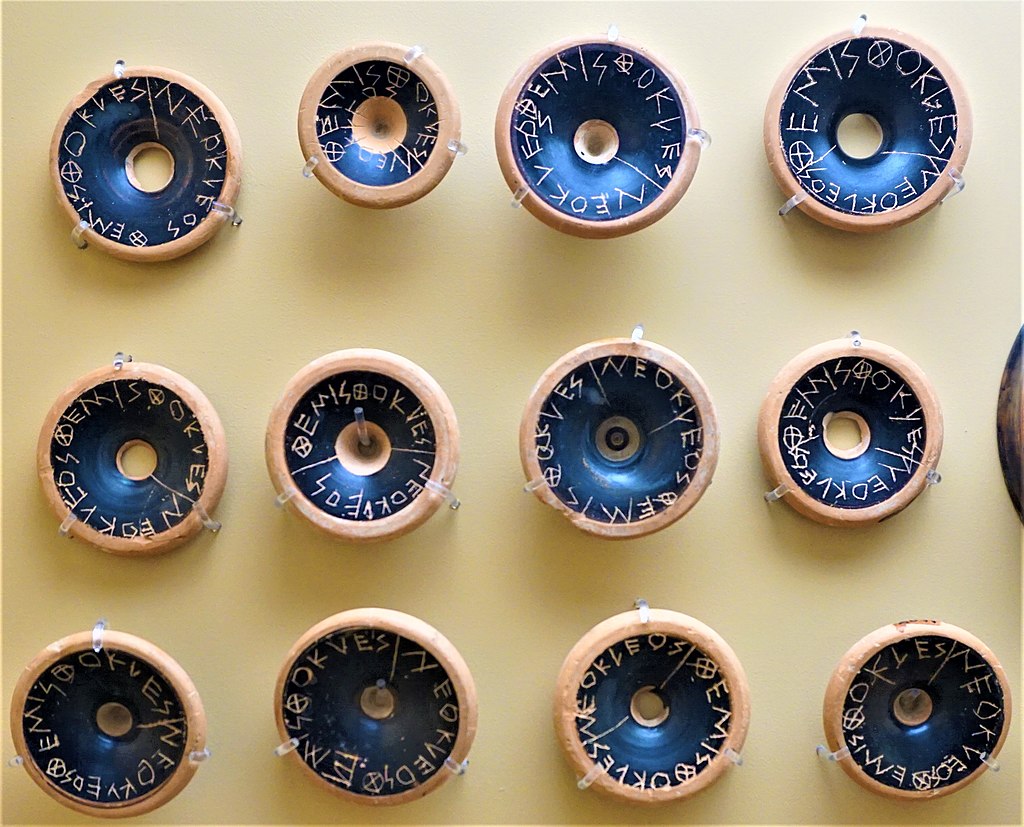 These Ostracon of Themistocles are pieces of pottery, broken off from a vase or other earthenware vessels, and inscribed with the name of Themistocles in Greek ΘEMISΘOKLES.

Ostraca refer to pottery shards that have writing scratched into them, and in this case, they were used to vote for Themistocles’ ostracism. These Ostrika were prepared for the exclusion of Themistocles.

They were all created with the same hand at about 482 BC. They were discovered in a well on the north slope of the Acropolis.

Ostracism was a procedure in the Athenian democracy in which any citizen could be expelled from Athens for ten years. While some instances clearly expressed widespread anger at the citizen, ostracism was also often used preemptively.

It was used to neutralize someone thought to be a threat to the state or a potential tyrant.

The name is derived from the ostraca (or ostraka), referring to the pottery shards used as voting tokens. Broken pottery was abundant and almost free. The pottery shards served as a kind of scrap paper.

Papyrus, which was imported from Egypt as a high-quality writing surface, was too expensive to be disposable.

Themistocles (524–459 BC) was an Athenian politician and general. He was a non-aristocratic politician who was a populist, having the support of lower-class Athenians and was generally at odds with the Athenian nobility.

During the first Persian invasion of Greece, he fought at the Battle of Marathon (490 BC). After Marathon, he advocated for a strong Athenian navy, and in 483 BC, he persuaded the Athenians to build a fleet of 200 triremes, which proved crucial in the conflict with Persia.

During the second invasion, he commanded the Greek allied navy at Artemisium and Salamis’s battles and played a prominent role in the achievement of the decisive Greek victory.

After the conflict ended, his perceived arrogance began to alienate him from the Athenians. In 471 BC, he was ostracised and went into exile in Argos. The Spartans saw an opportunity to destroy Themistocles and forced him to flee from Greece.

Themistocles died in exile; however, his reputation was posthumously rehabilitated, and he was re-established as a hero of Athens. His naval policies had a lasting impact on Athens since maritime power became the cornerstone of the Athenian Empire and golden age.

A Tour of the Museum of the Ancient Agora

A day in the life of an ancient Athenian

A Tour of the Museums in Athens

A Tour of the Historical Sites in Athens

Themistocles and the Battle of Salamis 480 BC

“You will never do anything in this world without courage. It is the greatest quality of the mind next to honor.”
– Aristotle