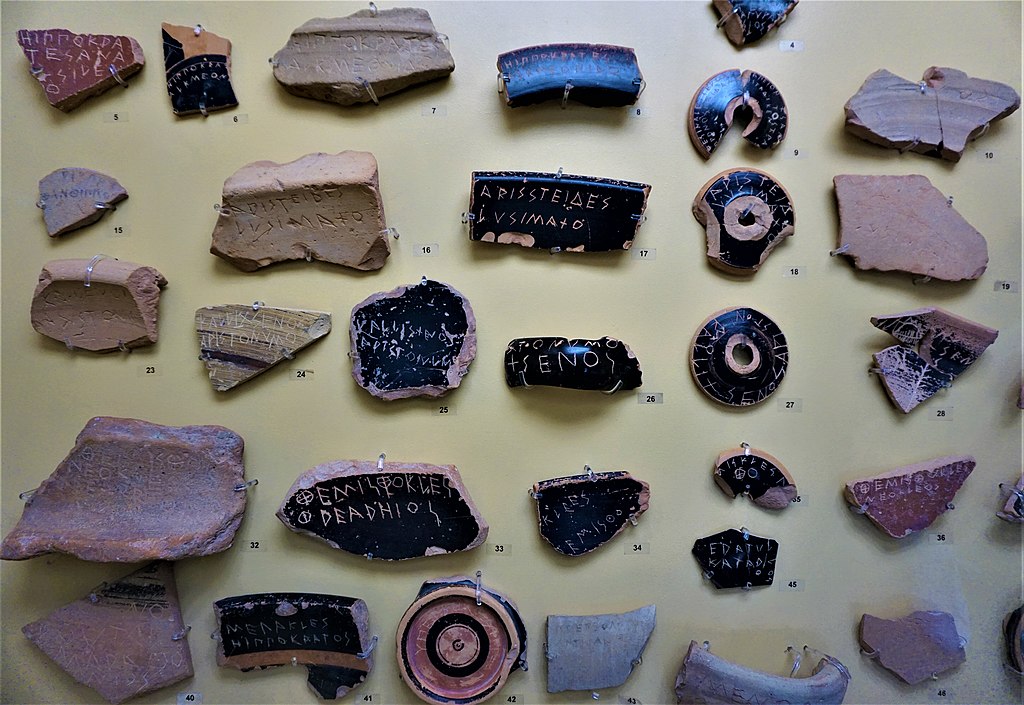 These Ostraka were used in the processes of Ostracism over 2,500 years ago as part of the Athenian Democratic model. They are pieces of pottery, broken off from a vase or other earthenware vessels, and inscribed with the name of Athenians being voted for Ostracism. Ostraka refers to pottery shards that have writing scratched into them for ostracism during the 5th century B.C. Ostraka gave its name to the word “ostracism,” which continues to be used today for various cases of social shunning.

Ostracism was a procedure in the Athenian democracy in which any citizen could be expelled from Athens for ten years. While some instances clearly expressed widespread anger at the citizen, ostracism was also often used preemptively. It was used as a way of neutralizing someone thought to be a threat to the state or a potential tyrant.

The name is derived from the ostraca (or ostraka), referring to the pottery shards that were used as voting tokens. Broken pottery was abundant and almost free; the pottery shards served as a kind of scrap paper. Papyrus, which was imported from Egypt as a high-quality writing surface, was too expensive to be disposable.

Each year the Athenian citizens were asked in assembly whether they wished to hold an ostracism. If they voted “yes,” then the ostracism voting process would be conducted two months later. Citizens gave the name of those they wished to be ostracised to a scribe, as many of them were illiterate, and they then scratched the name on pottery shards and deposited them in urns. The officials then counted the ostraka and sorted the names into separate piles. The person whose collection contained the most ostraka would be banished, provided that there was a quorum of 6,000 ostraka.

The person who was ostracised had ten days to leave the city. If they attempted to return, the penalty was death. Notably, the property of the man banished was not confiscated, and there was no loss of status. After ten years, they were allowed to return without stigma. It was also possible for the assembly to recall an ostracised person ahead of time during an emergency.

Some of the names scratched on these Ostraka in the picture include:

The two-month gap between voting for an ostracism process and the actual voting in the ostracism was a key feature in the institution of Ostracism. It prevented candidates for expulsion being voted out due to impulse anger. Secondly, it opened up a period for discussion and reconciliation, whether informally or through public speeches before the Athenian assembly or Athenian courts. In this process, a consensus might emerge. During that time of waiting, ordinary Athenian citizens felt a certain power over the more powerful members of their city. Conversely, the most prominent and powerful citizens, had an incentive to work towards making contributions to their society and city.

Ostracism, as a recent phenomenon, is defined as any acts of ignoring and excluding a person or groups. The most common form of exclusion in a contemporary context is refusing to communicate with a person. The internet has made ostracism easier to engage in, and more challenging to detect. This online ostracism has been called  “cyber ostracism.”

In email communication, it is relatively easy to ignore and exclude a specific person by merely refusing to communicate with the person. Research has demonstrated that being rejected from groups can have profound effects on a person’s psychology.

Research suggests that ostracism is a common reprisal strategy used by organizations in response to whistleblowing.

A Tour of the Museum of the Ancient Agora

Exploring the Museums in Athens

“Those who are too smart to engage in politics are punished by being governed by those who are dumber.”
– Plato