The Antikythera mechanism is an ancient Greek analog computer and mechanical model of the solar system used to predict planetary positions and eclipses.

Discovered in 1902 in a shipwreck off the coast of the Greek island of Antikythera, which is located between Crete and Peloponnese.

The mechanism was designed and constructed by Greek scientists from about 100 BC to 200 BC. It has been suggested that the Antikythera Mechanism was lost in the shipwreck while being taken to Rome.

It was part of looted Greek treasures to support a triumphal parade being staged by Julius Caesar.

The device consisted of an elaborate clockwork mechanism with 37 gear wheels enabling it to follow the moon’s movements and the sun through the zodiac.

It could predict eclipses and to model the irregular orbit of the moon. The knowledge of this technology was lost in antiquity.

The technology of this complexity and artistry does not appear again until the development of astronomical mechanical clocks in Europe in the fourteenth century.

The shipwreck was dated to about 70-60 BC. It was found in 1900 by a group of Greek sponge divers who retrieved many significant artifacts.

It went unexplored for a few years until it was noticed that a gear wheel was embedded in the corroded chunks of bronze debris.

Not until 1971 did X-ray and gamma-ray images of the 82 fragments lead to the recognition that this was one of the first known analog computers. 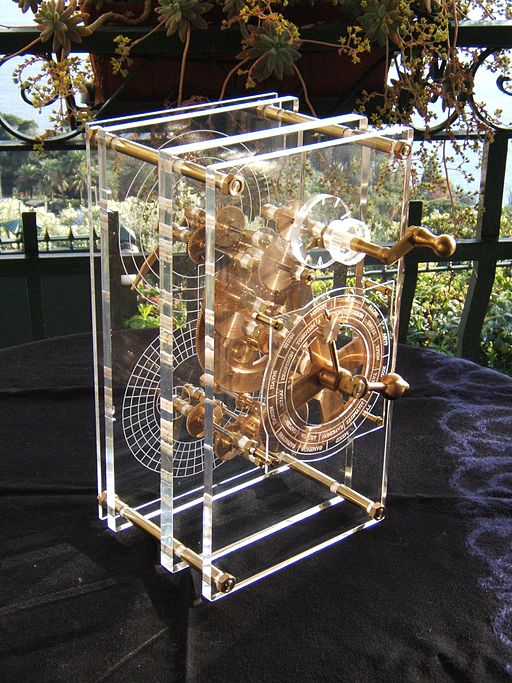 A Modern Model and Recreation of the Antikythera Mechanism

A Tour of the Museums in Athens

Decoding the Heavens: The Antikythera Mechanism