The Artemision Bronze represents either Zeus, the ancient Greek king of the gods of Mount Olympus, or possibly Poseidon, the god of the Sea.

This sculpture is a rare, ancient Greek bronze sculpture that was recovered from the sea off Cape Artemision, Greece.

Created in the early Geek Classical Period of 460 BC, this masterpiece is the embodiment of beauty, control, and strength.

He is shown in full heroic nudity with his left arm and foot thrust dynamically forward in the direction of his foes, while his right leg and arm are raised and slightly bent, representing movement.

Most of his weight shifted to the left foot while the other lightly touches the ground. The figure appears to be paused, ready for action.

The head is sculptured in considerable detail with his hair and beard intricately carved. His eyebrows were initially made of silver, his lips of copper, and his eyes of some other material, which are now entirely missing.

Because of its majesty and similarity to other statues of Zeus, it is assumed to represent the mightiest of the Olympian gods, Zeus.

The “Artemision Bronze” sculpture was found in two pieces at the bottom of the sea. It was presumably part of a sunken Roman ship’s cargo, as many Greek masterpieces were repatriated to Rome as the thirst for Greek Art consumed the Romans in the 1st and 2nd centuries BC.

Many such shipwrecks with Greek scriptures are from an Ancient Roman date and were of vessels looting Greek art.

The statue was found in 1926 and then excavated in 1928. Greek fishermen first discovered the left arm in their nets. The rest of the figure was recovered in 1928.

This sculpture was made in the lost-wax method of bronze casting, with each section cast separately and then welded together. 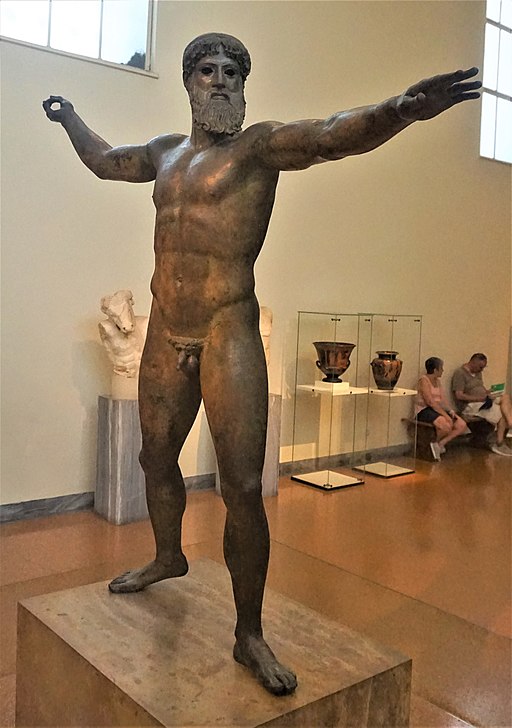 Most ancient Greek bronzes were melted down for their raw materials as the cyclical fortunes of Ancient Greece, and Rome demanded.

Fortunately, this bronze was saved from destruction when it was lost in a shipwreck in antiquity and discovered in an age when ancient treasures were worth more than the value of the bronze or gold raw material, with which they were constructed.

This sculpture was created for the delight of not only the Greeks but also their gods. This statue was probably designed as an offering or votive for a temple dedicated to Zeus.

In committing such works of art as offerings, the Greeks attempted to appease their gods and earn divine favor.

A Virtual Tour of famous Sculptures

“Let him that would move the world, first move themselves.”
– Socrates