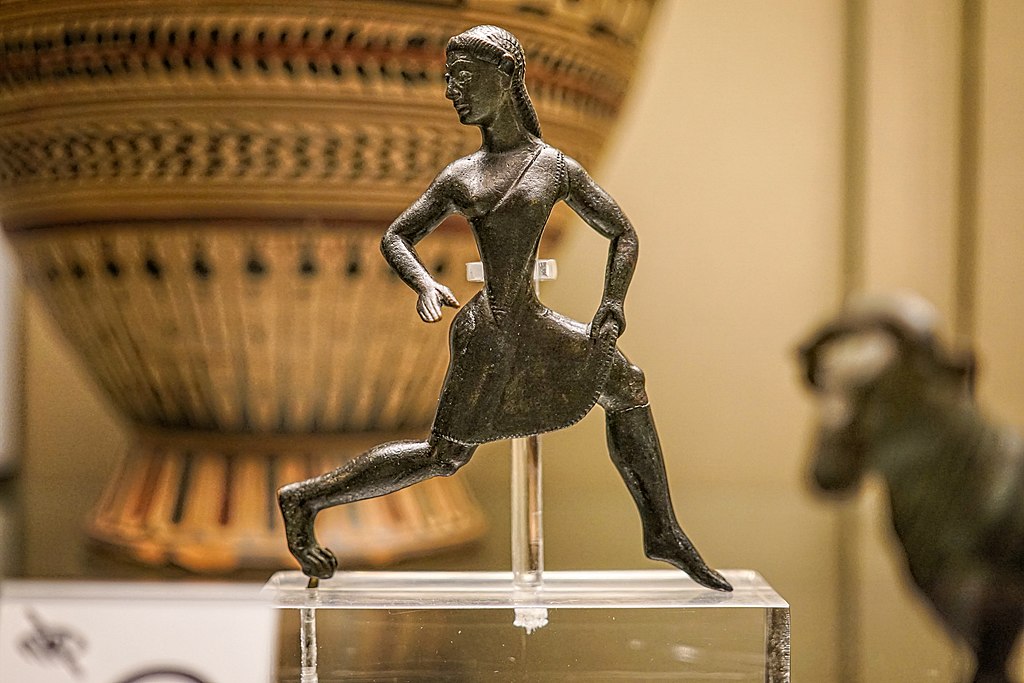 This statuette of an Athletic Spartan Girl is a bronze figurine depicting a Spartan young woman wearing a short tunic in a running pose.

A number of these statuettes were made in Sparta dating from the 6th century B.C. and were used as decorative attachments to ritual vessels, such as cauldrons used as votive dedications.

The figures typically have their hair hung down, right arm slightly bent, left hand lifting the hem of the chiton skirt and exposed part of the left thigh to ease movement, and their legs in a full stride.

About forty bronze statuettes dating from the Archaic period have been found showing young Spartan women dancing or running.

There are also pieces depicting Spartan women playing sports in nudity, just as the Spartan men.

The style of this statuettes is attributed to a Laconia workshop from the Archaic Period.

The typical characteristics of Laconian bronzes are slender bodies with muscular legs, arched and swelling thighs, immature chest in female figures, and long faces with strongly marked facial features. Laconia bronzes were widely traded and have been found in regions outside Sparta.

This statuette, from the British Museum, shows a short chiton affixed to the left shoulder, leaving the right shoulder and breast bare.

This costume is the type of athletic dress, especially for the participant in Heraea Games. The ancient Heraean Games were a series of athletic events in which only women athletes participated.

The Heraean Games is the earliest recorded women’s running competition and was held every four years at the Olympic stadium.

Although women in Ancient Greece, except for Spartan women, were not encouraged to take part in athletic activities and were excluded from the Olympic games, they could take part in the foot race at Heraea, which was an athletic event for girls of all ages.

The piece from the National Archaeological Museum in Athens is wearing a bodice of the chiton, which covers both shoulders and breasts, representing the running costume for girls at local ritual festivals in Sparta.

During the festival, some Spartan maidens ran a unique race in honor of Dionysus. This ritual was celebrating the girls’ rites of passage and involved dancing, singing, and other athletic events. (The picture above is an example from the British Museum)

Women in Sparta led very different lives from other women in ancient Greece. Spartan girls were offered a state-supervised educational system separated from the boys, including a physical training program.

Spartan girls were said to wear very little when they did sports. Wearing short tunics that exposed half of their thighs, Spartan women were called “thigh flashers,” according to accounts in ancient Greece.

Reports state that they left home “with bare thighs and loosened tunics” on their way to run and wrestle.

The ancient Heraean Games were a series of athletic events in which only women athletes participated.

This event was held to honor the Greek mythological goddess Hera. Just like the ancient Olympic games, Heraean Games were held once every four years.

The stadium that held the Heraean Games was the same stadium where the ancient Olympic Games were conducted. Unlike the male athletes, women athletes did not participate in the nude but wore tunics which reached to their knees.

Greek women were allowed to compete in the same festivals as men after the classical period.

This is Sparta: Fierce warriors of the Ancient World

The Constitution of the Spartans