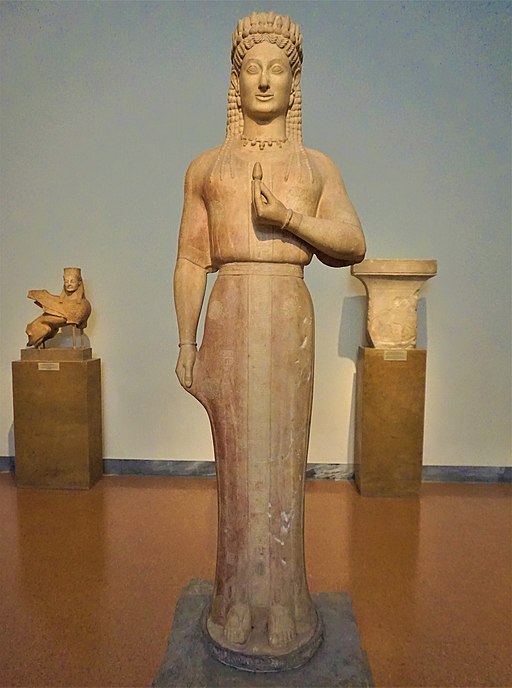 The Phrasikleia Kore is a funerary statue created about 550 BC. The inscription suggests, it depicts a young woman who died unmarried and therefore is forever a maiden.

She stands erect and wearing a long peplos, which was decorated with colored flowers and meanders. Around her waist, she wears a girdle. The front of her feet and sandals are visible.

Her right arm hangs down and firmly pulls on her peplos as if making an introduction. Her left arm is held in front of her chest and holds a still-unopened lotus flower.

She wears a garland of flowers, on her head, round her neck a necklace, and on each arm a bracelet.

The Phrasikleia Kore is a rarely preserved statue carved from Parian marble, which features the remains of a variety of colors on her face, hair, and dress.

The Phrasikleia Kore is one of the most important works of Archaic art because it was so well preserved because it was buried in a custom-designed pit.

The circumstances of the secure burial of the Phrasikleia Kore was because of the political instability of the time.

Her prominent family commissioned the sculpture, and for the later safe funeral of the Phrasikleia Kore so that it would not be found and vandalized in the political rivalry of the time.

Phrasikleia Kore was found in 1972, buried in the ancient city of Myrrhinous (modern Merenta) in Attica. The original base of the statue was identified and reunited with the Phrasikleia Kore.

It also confirmed that the figure had been made by the artist Aristion of Paros. The primary function of the Phrasikleia Kore was as a funerary statue or votive offering.

In this case, Phrasikleia marked the grave of a girl who died unmarried. The inscription on her pedestal confirms this status.

Also, there is the symbolism of the jewelry, peplos, and the lotus flower. Also, as suggested by the epigram on the Phrasikleia Kore:

“Tomb of Phrasikleia.
Kore (maiden) I must be called evermore;
instead of marriage, by the Gods, this name became my fate.”

The lotus she is holding in her left hand is repeated on the crown of the Phrasikleia Kore and is an Egyptian funerary symbol used by the Greeks.

It would have been customary to adorn the dead with a floral crown, like the one seen on the Phrasikleia Kore’s head.

The polychromy on the Phrasikleia Kore displays the use of eleven different reds, yellows, black, and white pigments.

The color of her skin used a mixture of white lead, red ochre, and light brown umber to achieve skin color quality. Also, the statue is embellished with gold and lead foil patterns.

The polychromy is known because of the existing, visible clour pigments remaining on the sculpture and with the assistance of technology to detect traces of color, engravings, and painted patterns.

A peplos is a body-length garment that became the typical attire for women in ancient Greece by 500 BC. It was a long, tubular cloth with the top edge folded down about halfway.

The top of the tube was now draped below the waist, and the bottom of the tube was at the ankle. The garment was then gathered about the waist and the folded top edge pinned over the shoulders.

Kore (Greek for maiden) is the modern term given to a free-standing ancient Greek sculpture of the Archaic period depicting young female figures. Kouroi are the youthful male equivalent statue.

Kore Sculptures show the restrained “archaic smile,” which did not demonstrate emotion. It was the symbol of the ideal, transcending the hardships of the world.

Unlike the nude male equivalents, Kore Sculpture is depicted in thick and elaborate drapery. As fashions changed, so did the type of clothing they wore. Over time, korai went from the heavy peplos to lighter garments such as the chiton.