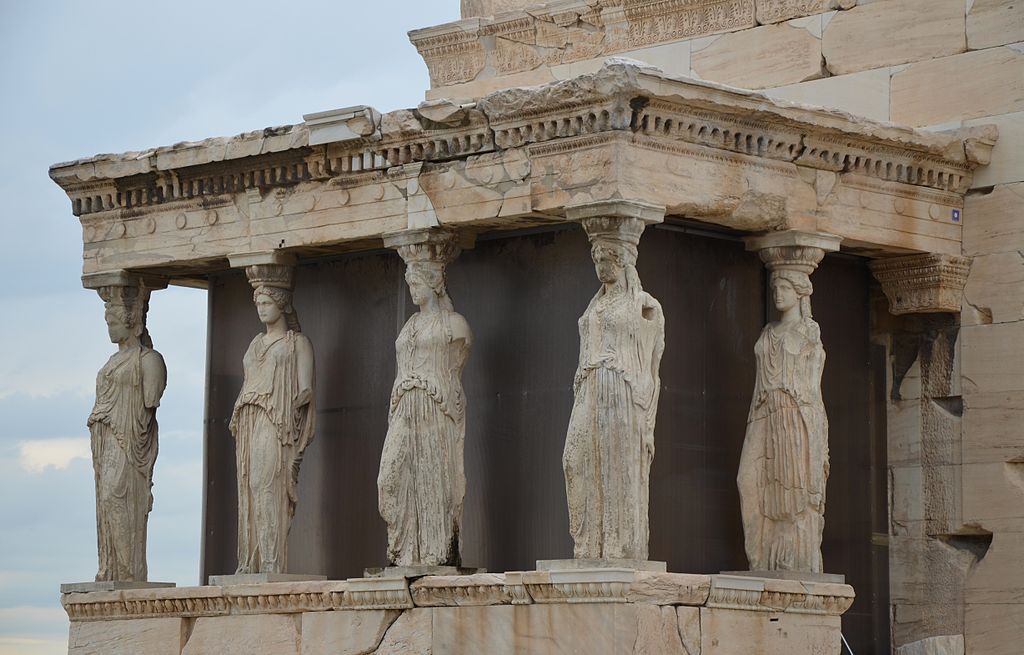 A Caryatid is a name given to a column in the form of a standing female figure. The most famous Caryatids are from the Erechtheion on the Acropolis of Athens.

The Erechtheion is a marble temple building in the Ionic order and was considered the most sacred part of the Acropolis.

The Greek term karyatides means “maidens of Karyai,” an ancient town of Peloponnese.

Initially, there were six maiden statues, today at the site, you can only see five. One of the Caryatids was removed by Lord Elgin in 1801 and is today located in the British Museum.

The Caryatids at the Erechtheum on the Acropolis of Athens are copies, as the five remaining originals are in the Acropolis Museum for their protection, conservation, and restoration.

The Caryatids of Erechtheum were sculptured from Pentelic marble. They wear a peplos pinned on each shoulder. The hair of the Korai (maidens) is braided and falls in like a thick rope down her back.

They carry the architectural capital like a basket on her head. The weight she bears is taken on the right leg, and the other leg is bent forward with the drapery molded to it.

Below is a painting titled “The Prostasis (portico) of the Caryatids on the Erechtheion,” painted in 1877 by Werner Carl-Friedrich (1808 – 1894).  This painting was made after the liberation of Greece from the Ottoman Empire.

The new Greek State undertook the first task to clear the Turkish dwellings from the Acropolis hill and reveal the classical monuments of antiquity.

This depiction is an early modern view of the Caryatids of Erechtheum following the restoration of the site without all the later additions.

The Romans copied the Erechtheion caryatids, installing copies in the Forum of Augustus and the Pantheon in Rome, and at Hadrian’s Villa at Tivoli.

In Early Modern times, integrating caryatids into building facades was revived, and in interiors, they began to be employed in fireplaces.

In the 16th century, caryatids became a fixture in the decorative vocabulary of Northern Mannerism. In the early 17th century, examples appear in Jacobean interiors in England.

Caryatids remained part of the German Baroque vocabulary and were refashioned in more restrained and “Grecian” forms by neoclassical architects and designers.

An interesting example is the four terracotta caryatids on the porch of St Pancras New Church, London (1822).

Today the original Caryatids of Erechtheum are not at the Temple on the Acropolis; they are in the Acropolis Museum for their protection, conservation, and restoration.

The Caryatids of Erechtheion

Caryatid and column from the Erechtheion

Porch of the Caryatids – Erechtheion

“Rome represents conquest;
Faith hovers over the towers of Jerusalem;
and Athens embodies the pre-eminent quality of the ancient world, Art.”
– Benjamin Disraeli