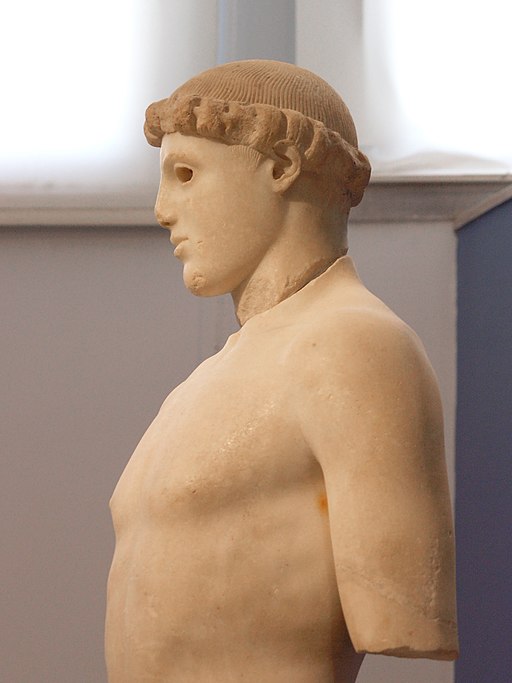 The Kritios Boy belongs to the early Classical period of ancient Greek sculpture from 480 BC. It is the first statue known to use the contrapposto posture.

Contrapposto is an Italian term that means “counterpoise.” It is used to describe a human figure standing with most of its weight on one foot so that its shoulders and arms twist off-axis from the hips and legs in the axial plane.

With the Kritios Boy, the Greek artist has mastered a complete understanding of how the different parts of the body act as a system.

The statue moves away from the rigid and stiff pose of the Archaic style. Kritios Boy presents a more relaxed and naturalistic posture known as contrapposto.

This stance forces a chain of anatomical events. As the pelvis is pushed diagonally upwards on the left side, the spine acquires an “S” curve, and the shoulder line dips on the left to counteract the action of the pelvis.

The Kritios Boy exhibits several other critical innovations that distinguish it from the Archaic Kouroi from the seventh and sixth century BC that paved its way.

The Archaic style relied more on geometrical shapes to define the contours of the human body. The muscular and skeletal structure of Kritios Boy is depicted with unforced lifelike accuracy of flesh and bone.

The rib cage is naturally expanded as if in the act of breathing, with a relaxed attitude and hips, which are distinctly narrower.

Sculptors had begun to break away from the rules of the Archaic style and follow representation that was closer to nature.

The “smile” of Archaic statues has been entirely replaced by the accurate rendering of the lips and the austere expression that characterized the transitional style.

The Kritios Boy is named because it is attributed to Kritios, who was an Athenian sculptor, working in the early 5th century BCE, whose style was on the cusp of the Late Archaic and the Early Classicism in Attica.

The torso was found in 1865 while excavating the foundation of the old museum at the Athenian Acropolis.

The head of this statue was found twenty-three years later between the museum and the Acropolis south wall, in the latest stage of the rubble of destruction from the Persian Wars.

The statue is smaller than life-size at 117 cm (3 ft 10 ins), including the supports that replace the missing feet.

The Contrapposto style first appeared in Ancient Greece in the early 5th century BCE. It is considered a crucial development in the history of Ancient Greek art, as it marks the first time in Western art that the human body is used to express a psychological disposition.

The style was further developed and popularized by sculptors in the Hellenistic and Imperial Roman periods, but fell out of use in the Middle ages, and was later revived during the Renaissance.

Michaelangelo’s statue of David is one of the most iconic sculptures in the world, it is a famous example of contrapposto.

The Kritios Boy was excavated in fragments in the Perserschutt in the Acropolis of Athens in 1864.

The damaged remains were preserved by the burial and were first excavated in 1863. The discoveries include the famous Calf Bearer and The Kritios Boy

The Perserschutt photographed in 1866, just after excavation. The Kritios Boy appears on the right.

Ephebos is a Greek term for a male adolescent, or for a social status reserved for that age, in Antiquity. In Ancient Greek sculpture, an ephebe is a sculptural type depicting a nude ephebo.

Its primary use is to identify the members, exclusively from that age group, of an official institution, ephebeia that saw to building them into citizens but especially training them as soldiers. The Greek city-state or Polis depended on its militia of citizens for defense.

In regards to Greek mythology, the ephebe was a young man or initiate, around the ages of 17 to 20, who was put through a period of isolation from his prior community.

The ephebe would need to hunt, rely on his senses, on aggression, stealth, and trickery to survive. At the end of the initiation, the ephebe was reincorporated back into society as a man.

The idea was that if the community were ever threatened, its men would have these skills needed to protect it.

Archaic examples of the Ephebos are also often known as the kouros type in artistic terms.

A kouros is a modern term given to free-standing ancient Greek sculptures that first appear in the Archaic period in Greece and represent nude male youths.

In Ancient Greek kouros means “youth, boy, especially of noble rank.” Such statues are found across the Greek-speaking world.

These free-standing sculptures were typically marble, but the form is also rendered in limestone, wood, bronze, ivory, and terracotta. They are generally life-sized, though early colossal examples are up to 3 meters tall.