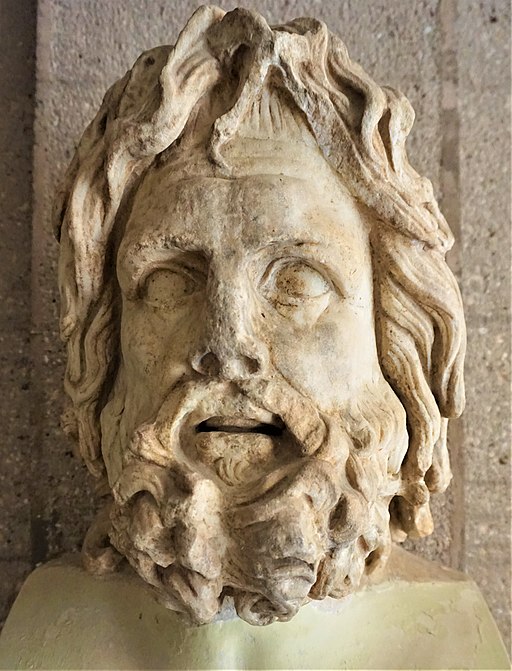 This Hermaic Stele of Zeus was excavated from Ancient Corinth in Greece. Hermaic steles featured a bust of a specific deity above a plain squared lower section, and it was usually placed at the entrances of particular public spaces. This Hermaic Stele features Zeus the thunder god in ancient Greek religion, who ruled as king of the gods of Mount Olympus.

This Hermaic Stele of Zeus was found near the Asklepieion at the Archaeological Site of Ancient Corinth. The Asklepieion was a healing temple sacred to the god Asclepius, the Greek god of medicine. The healing temple was a place where patients visit to receive either treatment or healing, whether it was spiritual or physical.

In pre-historic times Greek divinities were worshipped in the form of a collection of stones or a column of stone or wood. In many parts of Greece, there were stones by the sides of roads, especially at their crossings or the boundaries of lands. Religious respect was shown by the custom of adding a rock to the collection or anointing the objects with oil. Later as Greece culture developed, a sculptured head and phallus were added to the column, which became a quadrangular column as the standard for a Herm sculpture.

Herm statues multiplied in ancient Greece as they were thought to ward off and to turn away harm or evil. In some Greek city-states, hermai were numerous and venerated; they were placed outside houses for good luck. They would be rubbed or anointed with olive oil and adorned with garlands or wreaths. This superstition has persisted into the modern world with some bronze or stone sculptures becoming shiny from being continually touched for good luck.

In Roman and Renaissance versions, the body was often sculptured from the waist up. The form was also used for portrait busts of famous public figures and has been used from Renaissance times on when herms were often attached to walls as decoration.

Sanctuary of Asklepieion in Ancient Corinth

There were two steps in the treatment process of the Asclepeion. The first was the purification stage, where the patient undergoes a series of baths and other purging techniques such as a controlled diet over several days or purging their emotions through art. The patient would then make an offering to the temple, and the priest would offer a prayer to ease the patient’s mind.

The second step is incubation or dream therapy. The patients would sleep at the temple to be visited by a god. The patient would then receive the proper treatment while in the dream or receive directions from the god on what the necessary steps were to treat their ailment. The patient could also tell their dream to a priest or a dream-interpreter who would interpret the type of treatment required for that patient.

A Tour of Ancient Corinth