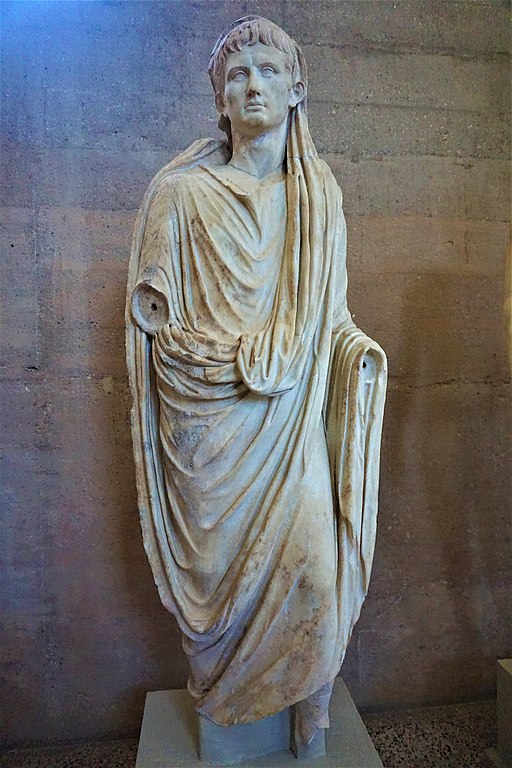 This Statue of Emperor Augustus was found in the area of the Julian Basilica in Ancient Corinth, Greece. The statue shows the first Emperor of the Roman Empire, in his role as Pontifex Maximus.

The Pontifex Maximus was the chief high priest of the College of Pontiffs in ancient Rome. This title was the most critical position in the ancient Roman religion.

It was initially a religious office under the early Roman Republic, but gradually it became politicized until, beginning with Augustus, it was subsumed into the Imperial office.

The word “pontifex” is derivative from “pontiff,” which later became the term used for Christian bishops, including the Bishop of Rome.

The title of “Pontifex Maximus” was applied within the Catholic Church to the Pope as its chief bishop.

Augustus was the first Emperor of the Roman Empire, controlling Imperial Rome from 27 BC until he died in AD 14. The reign of Augustus initiated an era of relative peace known as the Pax Romana.

Augustus dramatically enlarged the Empire and reformed the Roman system of taxation, developed roads with an official courier system, established a standing army and rebuilt much of the city during his reign.

Under the Romans, Corinth was rebuilt as a major city in Southern Greece. It had a large population consisting of Romans, Greeks, and Jews.

During Ancient Roman times, a Basilica was a public building where courts were held and served other official and public functions.

The Julian Basilica was named after Julian, the Roman Emperor from 361 to 363, who was also a notable philosopher and author in Greek.

Julian was the last non-Christian ruler of the Roman Empire. He attempted to revive traditional Roman religious practices and rejected Christianity.

His rejection of Christianity and his promotion of Neoplatonic Hellenism lead to him been named Julian the Apostate by the church.

The Face of Emperor Augustus

“If you want a rainbow, you have to deal with the rain.”
– Augustus