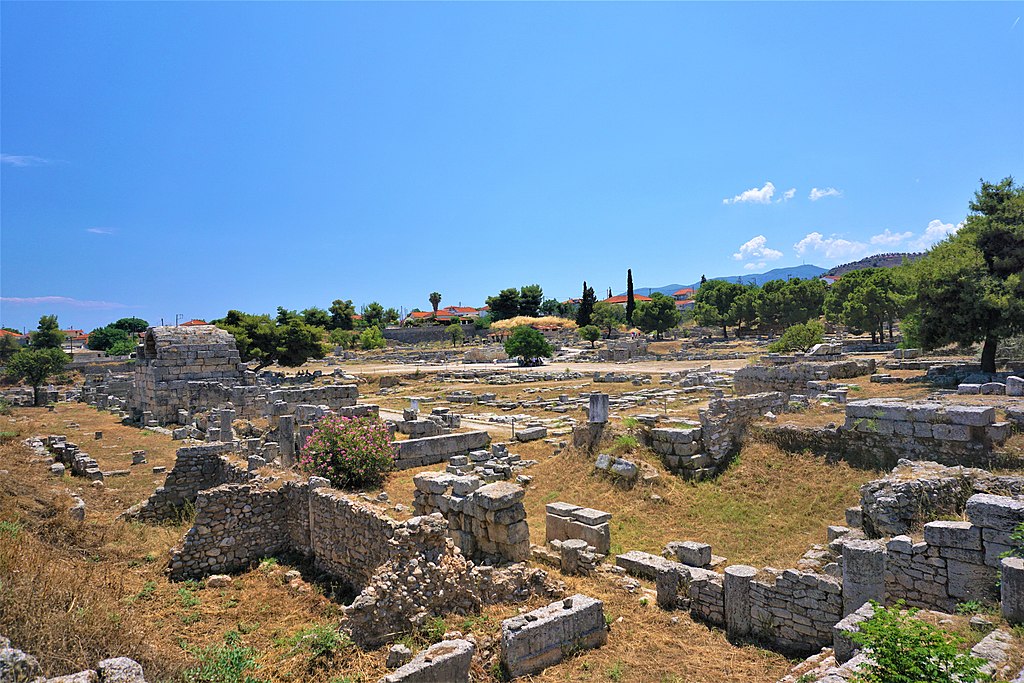 Archaeological Site of Ancient Corinth started with the first excavations in 1896 and has continued until today. Excavations began with the area surrounding the mid-6th century B.C. Temple of Apollo.

This dominating monument has been one of the few features of the site visible since antiquity. Investigations have revealed remains from the Early Neolithic period (6500-5750 B.C.) through to early modern times.

Archaeological work includes the Sanctuary of Demeter and Kore on the slopes of Acrocorinth, in the Potters’ Quarter, at the sites of the Sanctuary of Asklepios and the Kenchreian Gate Basilica.

Finds from these works are housed in the Archaeological Museum of Ancient Corinth.

Corinth is mentioned many times in the New Testament, mainly in connection with Paul the Apostle’s mission to Corinth. Traditionally, the Church of Corinth is believed to have been founded by Paul.

Paul first visited the city in A.D. 49 or 50 and resided there for eighteen months and regularly attended the synagogue. Paul wrote at least two epistles to the Corinthian Christian church, which are now part of the Bible.

Ancient Corinth was one of the largest and most important cities of Ancient Greece. The Romans demolished Corinth in 146 BC, built a new town in its place in 44 BC, and made it the provincial capital of Greece.

For Christians, Corinth is also crucial because of the letters of Saint Paul in the New Testament, First Corinthians, and Second Corinthians. Corinth is also mentioned in the Book of Acts as part of the Apostle Paul’s missionary travels.

In 1458, five years after the final Fall of Constantinople, the Turks of the Ottoman Empire conquered the city. The Ottomans made it a district center. Later the Venetians captured the town in 1687, and it remained under Venetian control until the Ottomans retook the city in 1715.

During the Greek War of Independence, 1821–1830, the city was destroyed by the Ottoman forces but was liberated in 1832 after the Treaty of London.

In 1833, the site was considered among the candidates for the new capital city of the recently founded Kingdom of Greece, due to its historic significance and strategic position. However, Nafplio was chosen initially and then Athens.

The fountain of Glauke was cut from the limestone ridge on which stands the Temple of Apollo. The large mass of limestone was formed into a giant cube, and the interior consists of four large reservoirs.

Local legends tell the story of Glauke who was the daughter of King Creon and was proposed in marriage to the hero of the Argonauts Jason,

However, before her wedding, Glauke received a poisoned peplos, which inflamed immediately upon it being worn. To be saved, the Glauke fell in the fountain, and it was then named after her.

In Greek mythology, Creusa, or in Latin, Glauca, was the daughter of King Creon of Corinth, Greece, in whose favor Jason abandoned Medea.

In the version of the myth commonly followed by ancient tragedians, Medea obtained her revenge by giving Creusa a dress that had been cursed by the sorceress. The curse caused the dress, or Shirt of Flame to stick to Creusa’s body and burn her to death as soon as she put it on. 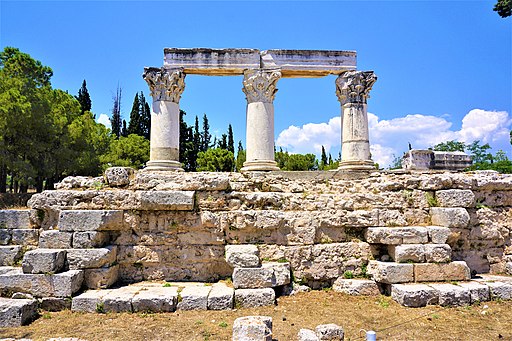