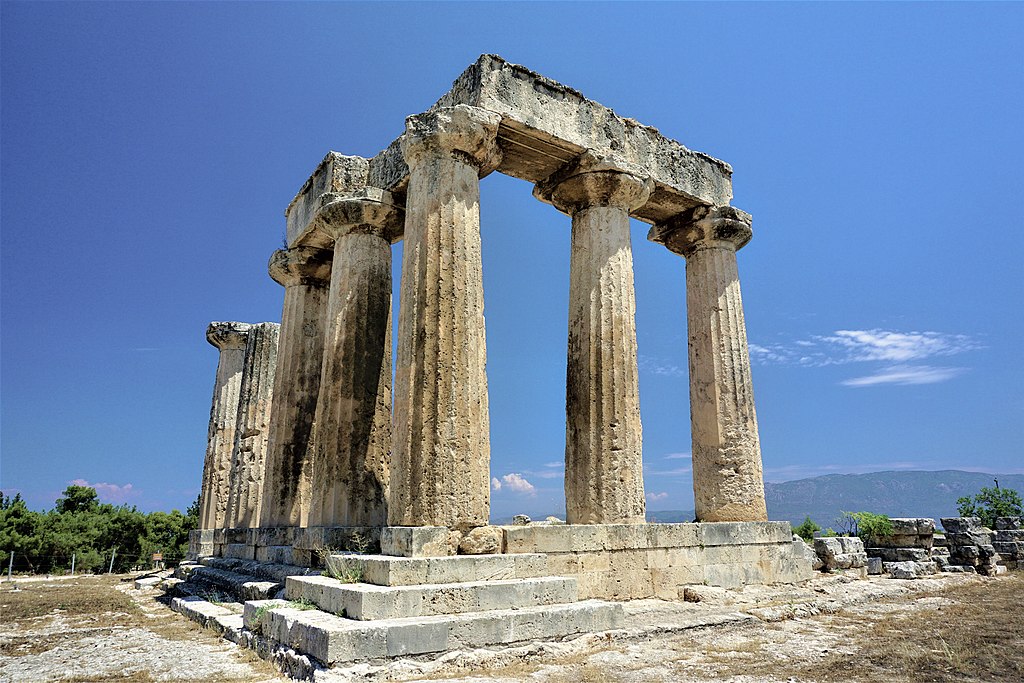 Temple of Apollo, in Ancient Corinth, was built about 540 B.C. in the Doric style on the ruins of much earlier temple. It is one of the earliest Doric temples in the Peloponnese constructed of local limestone on top of an imposing, rocky hill.

This temple was an emblem for the Greek city of Corinth, reflecting its growth and prosperity.

The remains of other temples, a theatre, shops, public baths, pottery factories, a gymnasium, a triumphal arch, and other buildings such as villas have been excavated since 1896 on the site around the Temple of Apollo.

Corinth was a city-state (polis) on the Isthmus of Corinth, the narrow stretch of land that joins the Peloponnese to the mainland of Greece, roughly halfway between Athens and Sparta.

Ancient Corinth was one of the largest and most important cities of Greece. Kypselos, who was the first tyrant of Corinth in the 7th century BC, after he removed the aristocracy from power, initiated the building of the temples to Apollo and Poseidon.

After the Roman conquest of Corinth and during the Roman period, the interior colonnades of the Temple were removed from the structure.

The columns were reused in the exterior colonnade of a stoa. A stoa was a covered walkway for public and commercial use with columns lining the side of the building.

In the first century, A.D. Roman stoas were built on the two sides of this temple. The Stoas were part of the marketplaces or Agora of Ancient Corinth and increased the commercial activity around the Temple and increased the economy of the city.

After the Romans came the Christians, the Byzantines, the Crusaders, the Venetians, and then the Ottomans, all of whom impacted the temple.

Fortunately, many Grecian temples such as this one have survived even in a ruined state. The columns are standing as witness to past glory. According to the Greek traveler Pausanias who wrote his descriptions between 155 and 180 AD, there was a significant bronze statue of Apollo in the Temple.

Many Greek bronze statue statues from temples like this one, were plundered by Roman Generals and taken to Rome as looted treasure.

Later during times of strife in Rome, these statues were melted down for money or weapons. Did the statue of Apollo from this Temple survive as a marble copy? And does the marble copy stand today in some museum somewhere in the world?

The Temple of Apollo was designed to have a portico of columns to create a colonnade surrounding the cella or naos in greek, which held the city treasures and gods.

The bronze statue of Apollo would have stood in the naos of the Temple.

Apollo is one of the essential Olympian deities in classical Greek and Roman religion and mythology. For the Greeks, Apollo was the god of music, prophecy, healing, the sun, poetry, and more.

He was seen as the most beautiful god, usually presented as a beardless, athletic youth. Apollo is considered to be the most Greek of all gods; he was the prophetic deity of the Delphic Oracle. Medicine and healing are associated with Apollo and his son, Asclepius.

Ancient Corinth & The Temple of Apollo