The Charioteer of Delphi is a rare surviving 2,500-year-old bronze sculpture from Ancient Greek culture. It is a life-size statue of a chariot driver found in 1896 at the Sanctuary of Apollo in Delphi.

The statue was commissioned to commemorate the victory of the tyrant Polyzalusa of Gela, a Greek colony in Sicily, and his chariot in the Pythian Games of 470 BC. 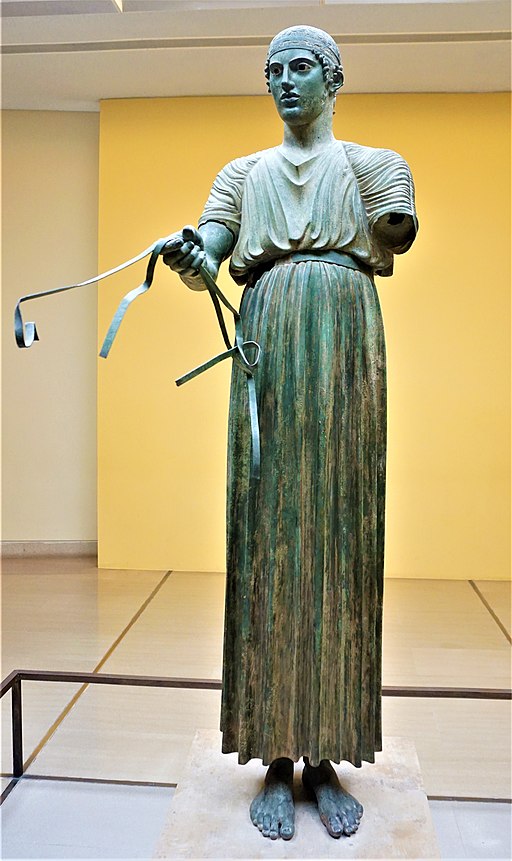 The Pythian Games (also known as the Delphic Games) were among the four Panhellenic Games of Ancient Greece. They were held in honor of Apollo every four years at his sanctuary at Delphi.

They were held two years after each Olympic Games. An inscription on the statue’s limestone base shows that Polyzalus dedicated it as a tribute to Apollo for helping him win the chariot race.

The Charioteer of Delphi was initially part of a larger group of sculptures that included the chariot, at least four horses, and possibly two grooms.

Some smaller fragments of the horses, grooms, and chariot were found with the statue. The Sicilian Greek colonies were very wealthy compared with most of the cities of mainland Greece.

Their rulers could afford magnificent offerings to the gods and the best horses and drivers for the games.

The sculptor’s name is unknown, but it is believed that the statue was cast in Athens, based on similarities with other Athenian masterpieces. The face and the body do not display arrogance, but the features of calm self-confidence. 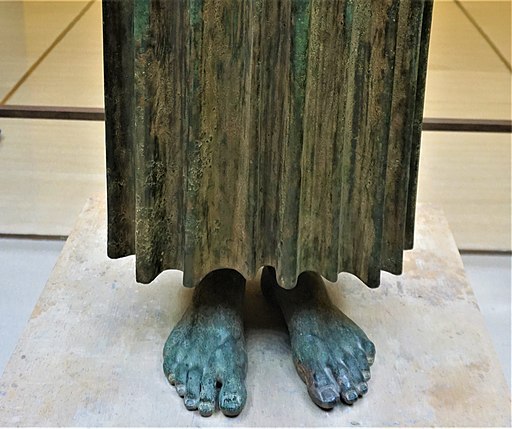 It is a life-size statue of a chariot driver was found in 1896 at the Sanctuary of Apollo in Delphi.

The Charioteer of Delphi was initially part of a more massive group sculpture, including the chariot, at least four horses, and possibly two grooms.

Some fragments of the horses were found with the statue.

This statue is one of the few Greek bronzes to have the original inlaid glass eyes. The face and the body do not display arrogance, but the features of calm self-confidence.

Advice from the Oracle of Apollo

Pythia was the priestess presiding over the Oracle of Apollo at Delphi. There are hundreds of statements from the Oracle at Delphi which has survived. Many are anecdotal and have survived as proverbs. Several are ambiguously phrased, apparently to show the oracle in a good light regardless of the outcome. Such prophecies were admired for their phrasing. The following are some of the prophecies of Delphi.

“Love of money and nothing else will ruin you.”

“Pray to the Winds. They will prove to be mighty allies of Greece.”

“Sophocles is wise, Euripides is wiser, but of all men, Socrates is wisest.”

“Make your own nature, not the advice of others, your guide in life.”

The Delphic maxims are a set of 147 aphorisms inscribed at Delphi. Initially, they were said to have been given by the Greek god Apollo’s Oracle at Delphi and were therefore attributed to Apollo himself.

The specific order and wording of each maxim vary between different versions and translations of the text.

“Charioteer of Delphi” – Museum Without Walls