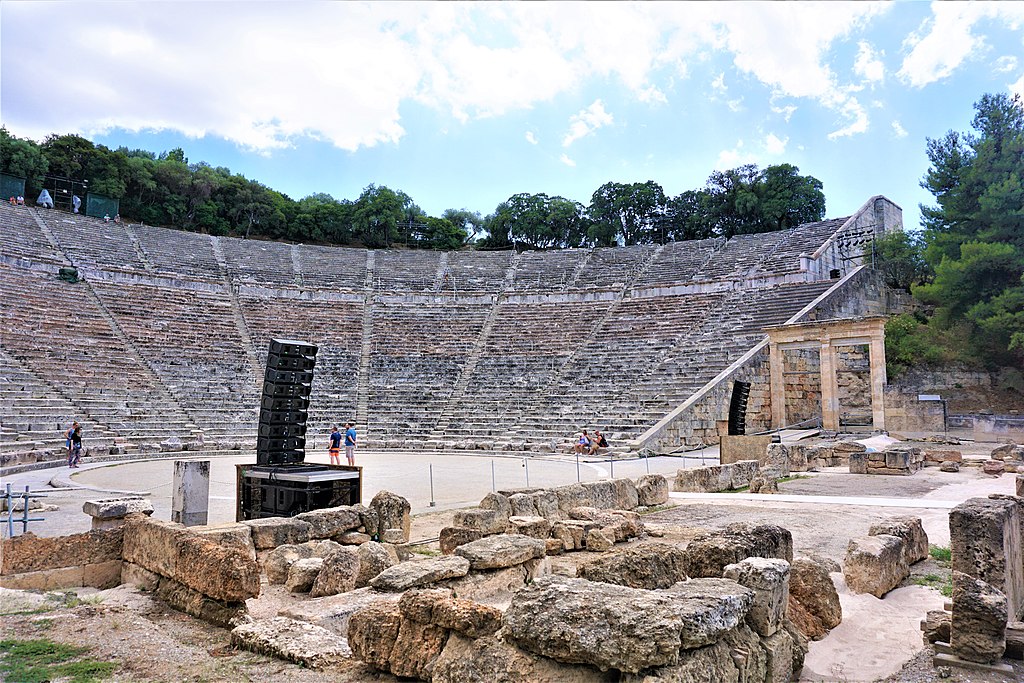 Epidaurus was a small polis in ancient Greece, on the Argolid Peninsula situated in Greece in the Peloponnese. In ancient times, Epidaurus was known for its famous Asclepeion Sanctuary dedicated to the ancient Greek God of medicine, Asclepius, which was an ancient healing temple as well as its theater. Today the Ancient Theater of Epidaurus is remarkably well preserved and is once again in use today.

The Ancient Theater of Epidaurus is built on the west side of a mountain and is considered to be the perfect ancient Greek theater with regards to acoustics and aesthetics. The Theater remains true to the structure of a Hellenistic theater, with an auditorium, orchestra and staging building. The theater, unlike many Ancient Greek theaters, did not suffer Roman era modifications.

The theater’s staging building was constructed in two phases: the first is placed at the end of the 4th century BCE and the second in the middle of the 2nd century BCE. Due to this unique design, the architects achieved both optimal acoustics and aesthetics for better viewing. The first systematic excavation of the theater began in 1881. It was preserved in good condition thanks to the restorations’ works, which recovered the theater almost entirely in its original form, except the stage building.

The Asclepeion at Epidaurus was one of the most famous healing centers of the Classical world, the place where people went in the hope of being cured. There was a guest house with 160 guest rooms and mineral springs in the vicinity, which were used in healing. Even after the introduction of Christianity and the closure of the oracle centers, the sanctuary at Epidaurus was still known as late as the mid 5th century as a Christian healing center.

“All the world’s a stage,
And all the men and women merely players;
They have their exits and their entrances,
And one man in his time plays many parts.”
-William Shakespeare