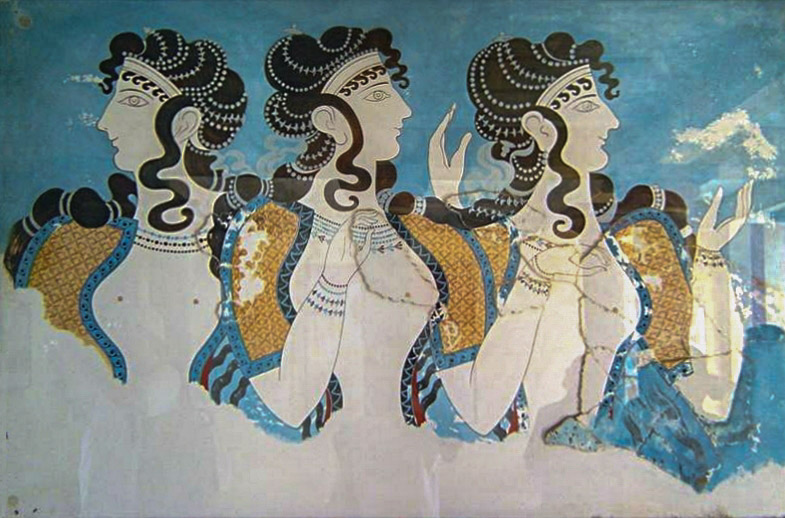 Minoan Fresco of the Ladies in Blue

Minoan Fresco of the Ladies in Blue depicts the women in the open blouse that was typical in the later Minoan Culture. Their skirts would have begun at the waist, were flounced, and of many colorful patterns.

These fresco fragments were discovered during the excavation of a Minoan site in Crete by the British archaeologist Sir Arthur John Evans.

They were uncovered in the west wing of the Palace of Knossos. The fresco was later significantly restored by Swiss artist Emile Gilliéron and his son, Emile, as the chief fresco restorers at Knossos.

The three white-skinned ladies with narrow waists and coiled hairstyles in this fresco are wearing form-fitting dresses that were low-cut and exposed their breasts.

The ladies with the graceful posture of their arms are depicted while conversating with each other, perhaps during a court festival or a prestigious social or religious ceremony.

The women in the fresco belong to the upper class of Minoan society. They might be goddesses as in the Snake Goddess example or just noble ladies of the court.

In Minoan iconography, the shift from the hat to the long hair and elaborate hairdressings is predominant in the New Palace Period.

High-status women stressed the display of the head to differentiate themselves from the women using hats as part of their attire.

This stylistic change served to promote the dominant groups of women that emerged in the Neopalatial Period who wished to differentiate themselves from the rest of women.

They are elaborately adorned with delicate necklaces, bracelets, and hair ornaments in a display of the wealth of the Minoan court.

Although this fresco is a striking piece of ancient artwork, it has some controversy attached to it, since it is not certain what were the details of the original composition.

Despite the elaborate details of the fresco, the fragmentary nature of the ancient remains is a restoration challenge for many of the murals from the Palace of Knossos.

The reconstructed fresco is on display at the Heraklion Archaeological Museum in Crete.

The writer Evelyn Waugh after a visit to the Museum in 1929, state that it is not easy to judge the merits of Minoan painting as:

“It is impossible to disregard the suspicion that their painters have tempered their zeal for accurate reconstruction with a somewhat inappropriate predilection for the covers of Vogue.”

Initially, in the Minoan culture, the loincloth was used by both sexes. Then later in Minoan civilization, the women of Minoan Crete wore the garment more as an underskirt than the men, by lengthening it.

Cretan women’s clothing included the first sewn garments known to history. Wool and flax were used. Fabrics were embroidered, and crimson was used for most of the dyeing.

With increasing affluence, the dresses grew long and low-necked, with the bodice being open almost to the waist, leaving the breasts exposed.

Dresses were often accompanied by the Minoan corset, an early form of corset created as a close-fitting blouse. They were designed to narrow the waist, as a narrow waist was prized in Minoan culture.

The belt was also kept tight and used to narrow the waist before the corset, a long or short coat, or a hat was used to supplement the female outfit.

Minoan clothes in ancient times were well documented in their artwork, mainly the many items worn by priestesses and priests.

Spinning and weaving were domestic activities, using a similar technique to the Egyptians of the time, and dyeing was the only commercial process in keeping with practices during the time.

Ancient brooches, which were widespread in the Mediterranean, were also used throughout the period. 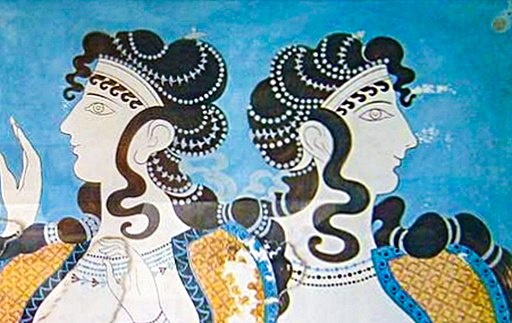 As Minoan writing has not been deciphered yet, almost all information available about Minoan women is from various art forms.

Women are depicted in fresco art paintings within various aspects of society, such as child-rearing, ritual participation, and worshiping.

Artistically, women were portrayed very differently compared to the representations of men. Most obviously, men were often artistically represented with dark skin while women were depicted with lighter, fairer skin.

Fresco paintings portray three class levels of women; elite women, women of the masses, and servants. The fourth class of women also included among some pictures; these women are those who participated in religious and sacred tasks.

Elite women were depicted within paintings as having twice the size of women in lower classes, and artistically this was a way of emphasizing the vital difference between the elite wealthy women and the rest of the female population within society.

Minoan men were often depicted clad in little clothing while women’s bodies, in later periods, were more conservatively covered up.

Throughout the evolution of women’s clothing, emphasis continued to be placed on the women’s sexual characteristics, particularly the breasts.

Female clothing throughout the Minoan era emphasized the breasts by exposing cleavage or even the entire breast. Similarly, to the modern bodice women continue to wear today, Minoan women were portrayed with wasp waists.

The waist of women was constricted, made smaller by a high belt or a tight lace bodice. Furthermore, not only women but men are illustrated wearing these accessories.

Minoan art is the art produced by the Minoan civilization from about 2600 to 1100 BC.

The Minoan Frescos were painted on stucco relief scenes and are classified as plastic art. They were challenging to produce as the artist had to simultaneous mold and painting of fresh stucco.

In contrast to Egyptian frescoes, Crete had more naturalistic murals. Probably the most famous fresco is the bull-leaping fresco.

They include many depictions of people, with sexes distinguished by color; the men’s skin is reddish-brown, and the women’s white.

The most extensive collection of Minoan art is in the Heraklion Archaeological Museum, near Knossos, on the northern coast of Crete. 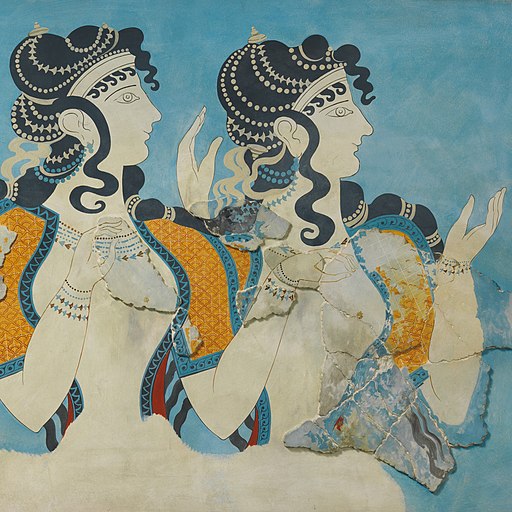 Reproduction of the “Ladies in Blue” fresco – MET

Minoan Art and other remnants of material culture, especially the sequence of ceramic styles, have been used by archaeologists to define the three phases of Minoan civilization:

Since wood and textiles have decomposed, the best-preserved surviving examples of Minoan art are its pottery, palace architecture with frescos, which include landscapes, and stone carvings.

Today’s frescos are reconstructed from the flakes of the damaged panels from the walls or that fell to the ground from the destruction of the palace.

The destruction was probably due to an earthquake during the Late Minoan period. By that time, that part of the palace, near which they fell, was disused, being partly ruinous.

The Minoan civilization was a Bronze Age Aegean civilization on the island of Crete and some other Aegean Islands, flourishing from c. about 3000 BC to around 1100 BC. 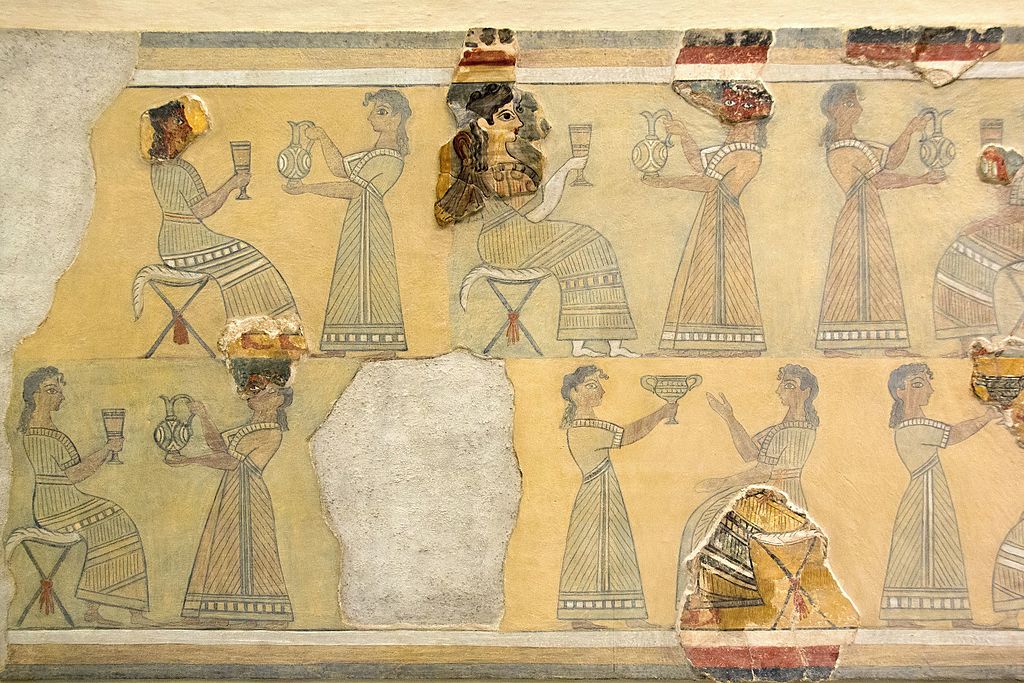 “Camp-stool Fresco” – Ceremonial banqueting from the west wing of the palace of Knossos –  Archaeological Museum of Heraklion.