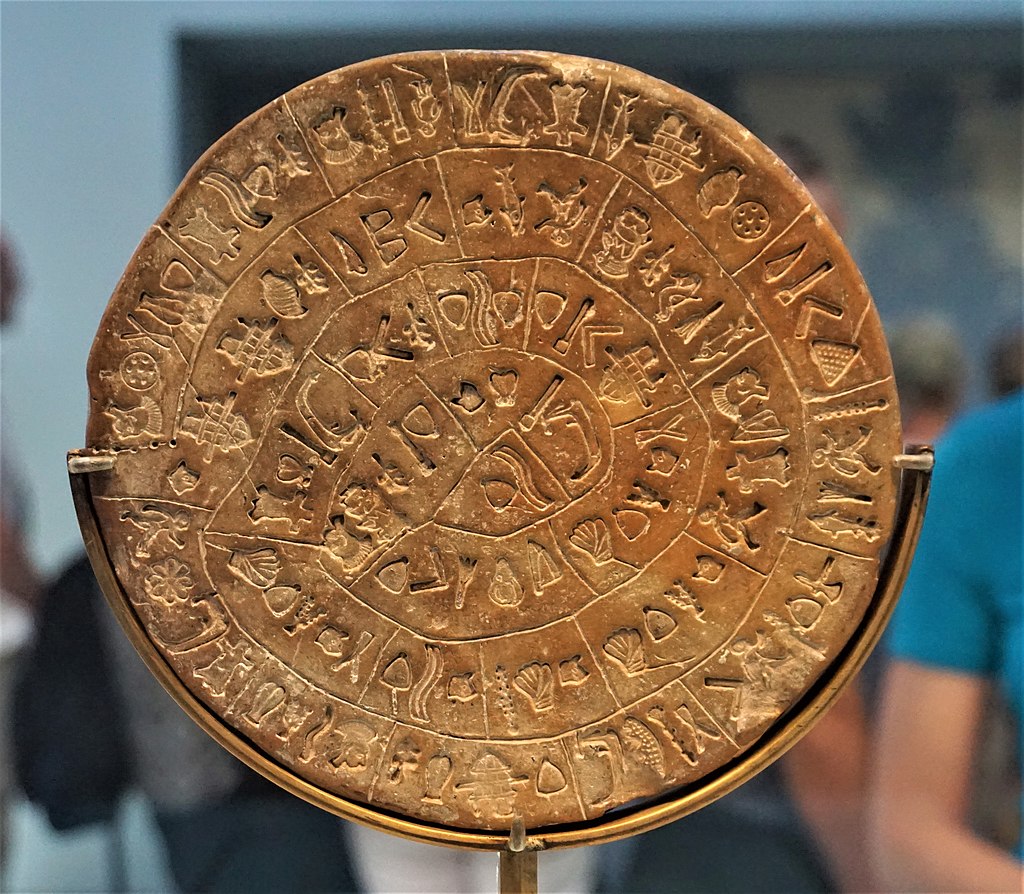 The Phaistos Disc is a disk of fired clay from the Minoan palace of Phaistos on the island of Crete, possibly dating to the Minoan Bronze Age in the second millennium B.C.

The disk is covered on both sides with a spiral of stamped symbols featuring 241 tokens, comprising 45 distinct signs.

The symbols were made by pressing hieroglyphic “seals” into a disc of soft clay, in a clockwise sequence spiraling toward the center of the disk.

Its purpose and meaning, and even its original geographical place of manufacture remain disputed, making it one of the most famous mysteries of archaeology.

The Phaistos Disc has captured the imagination of archaeologists, and many attempts have been made to decipher the code behind the disc’s signs.

Although it is generally accepted as authentic by archaeologists, a few scholars believe that the disc is a forgery or a hoax.

This assumption that it is genuine is supported by the later discovery of the Arkalochori Axe with similar but not identical glyphs.

A gold signet ring from Knossos, the Mavro Spilio ring, found in 1926, contains a Linear A inscription developed in a field defined by a spiral, similar to the Phaistos Disc.

A sealing found in 1955 is considered as evidence that the Phaistos Disc is a genuine Minoan artifact.

Side A of the Phaistos Disc

The Phaistos Disc was discovered in the Minoan palace of Phaistos on the south coast of Crete. Specifically, the disc was found in the primary cell of an underground “temple depository.”

The site collapsed as a result of an earthquake, possibly linked with the eruption of the Santorini volcano that affected large parts of the Mediterranean region during the mid-second millennium B.C.

In the famous book Guns, Germs, and Steel, Jared Diamond describes the disc as an example of a technological advancement that did not become widespread.

He claims it was made at the wrong time in history and contrasts this disk with Gutenberg’s printing press.

The Minoan civilization was an Aegean Bronze Age civilization on the island of Crete, which flourished from c. 2700 to c. 1450 BCE, before declining and ending around 1100 BC. The culture was rediscovered at the beginning of the 20th century.

The name “Minoan” is derived from the mythical King Minos and was coined by British archaeologist Sir Arthur Evans, who identified the site at Knossos with the labyrinth and the Minotaur.

The Minoan civilization has been described as the earliest of its kind in Europe.

Phaistos Crete, the palace of Phaistos

The Mycenaeans and Minoans Today: Revivals of Bronze Age Greece

The Riddle of the Phaistos Disc is Solved