Meteora is a rock formation in Greece hosting one of the largest and most precipitously built complexes of Greek Orthodox monasteries.

The original twenty-four monasteries were built on massive natural pillars that dominate the local area. The name means “lofty,” “elevated,” and is related to the word meteor.

Caves in the vicinity of Meteora were inhabited continuously between 50,000 and 5,000 years ago. However, Meteora’s current religious significance first started when an ascetic group of hermit monks, in the 9th century AD, moved up to the ancient pinnacles.

They lived in the hollows and cracks in the rock towers, some as high as 1800 ft (550m) above the plain. The height and the sheerness of the cliff walls kept away visitors. Initially, the hermits led a life of solitude, meeting only on Sundays and special days to worship and pray in a small chapel built at the foot of the rocks.

More and more monks were attracted to the area and occupied more of the caverns of Meteora, and by the late 11th and early 12th centuries, a rudimentary monastic state had formed.

The monasteries were not built until the 14th century when the monks sought somewhere to hide in the face of an increasing number of Turkish attacks on Greece. At this time, access to the top was via removable ladders or windlass.

Until the 17th century, the primary means of conveying goods and people to the monasteries was using baskets and ropes. In the 1920s, steps were cut into the rock, making the complex accessible via bridges.

Today Meteora is located near the town of Kalambaka, and of the original 24 monasteries, only six are still functioning, with increasingly reduced membership. Four monasteries are for male members, and two are for female members.

Meteora is a rock formation in Greece hosting the largest and most precipitously built complexes of Greek Orthodox monasteries.

Today in Meteora of the original 24 monasteries, only six are still functioning, with increasingly reduced membership. Four monasteries are for male members called monks, and two are for female members or nuns.

The Monastery of Great Meteoron is the largest of the monasteries located at Meteora.

It was erected in the mid-14th century and was increased in size between 1483 and 1552.  The main church is consecrated in honor of the Transfiguration of Jesus.

The Monastery of Great Meteoron was first erected in the last years of the Byzantine Empire, which was the continuation of the Roman Empire in its eastern provinces.

During Late Antiquity and the Middle Ages, its capital city was Constantinople (modern-day Istanbul). It survived the fragmentation and fall of the Western Roman Empire for an extra thousand years until it fell to the Ottoman Turks in 1453.

Emperor Constantine I (r. 324–337) legalized Christianity, and eventually, Christianity became the Empire’s official state religion, and under the reign of Heraclius (r. 610–641), the Empire’s military and administration were restructured and adopted Greek for official use instead of Latin.

Historians distinguish Byzantium from ancient Rome once the Eastern Empire oriented towards Greek and not Latin culture and became dominated by Orthodox Christianity.

The Monastery of Rousanou / St. Barbara was founded in the middle of the 16th century, and today it is a nunnery. The Eastern Orthodox Church places high emphasis and prestige to traditions of monasticism and asceticism.

Those who choose this path, separate themselves from the world and live as monks and nuns. This kind of life is often seen as incompatible with any type of worldly activity, including social work, school teaching, and other such virtuous works are therefore left to laypeople. 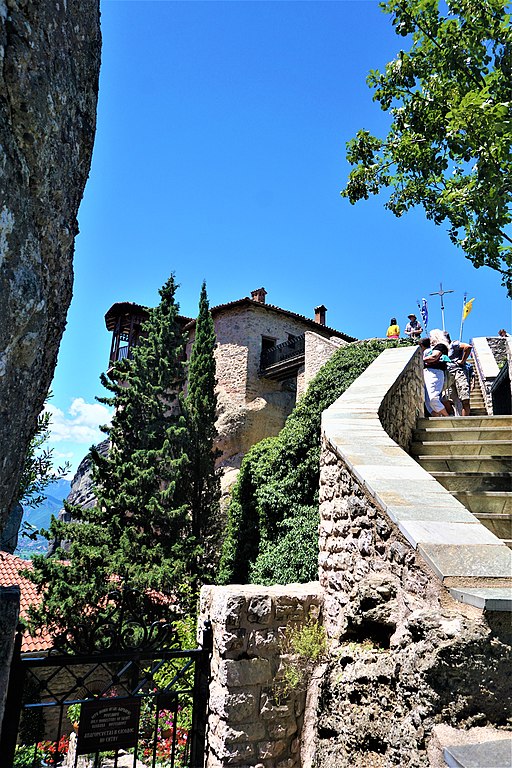 The Monastery of St. Stephen has a church built in the 16th century and rests on a high plain and not on a narrow cliff. The Nazis shelled it during World War II, who believed it was harboring insurgents and was later abandoned.

The monastery was given over to nuns in 1961, and they have converted it into a flourishing nunnery.

In 1453, the Byzantine Empire fell to the Ottoman Empire. Under the Ottoman rule, the Greek Orthodox Church acquired real power as an autonomous, separate court of law under which a confessional community was allowed to rule itself under its laws.

The ecumenical patriarch was the religious and administrative ruler of the Rûm, which was an Ottoman administrative unit meaning “Roman,” which encompassed all the Orthodox subjects of the Empire.

A monastery comprises the domestic quarters and workplaces of monastics, monks, or nuns, whether living in communities or alone as hermits.

A monastery generally includes a place reserved for prayer which may be a chapel, church, or temple, and may also serve as an oratory.

Monasteries vary in size, comprising a small dwelling accommodating only a hermit, or in the case of communities, anything from a single building housing only one senior and two or three junior monks or nuns to vast complexes and estates housing hundreds.

In the Eastern Orthodox Church and Eastern Catholic Church, both monks and nuns follow a similar ascetic discipline, and even their religious habit is the same. The Orthodox do not have separate religious orders, but a single monastic embodiment throughout the Orthodox Church. Monastics live away from the world, to pray for the world.

One of the great centers of Orthodox monasticism is Mount Athos in Greece, which is self-governing. It is located on an isolated peninsula and is administered by the heads of the 20 monasteries.

Today the population of Mount Athos is around 2,000 men and can only be visited by men with special permission granted by both the Greek government and the government of the Holy Mountain itself.

Living on the rocks, Meteora

“Happiness can only be achieved by looking inward and learning to enjoy whatever life has, and this requires transforming into gratitude.”
– Saint John Chrysostom