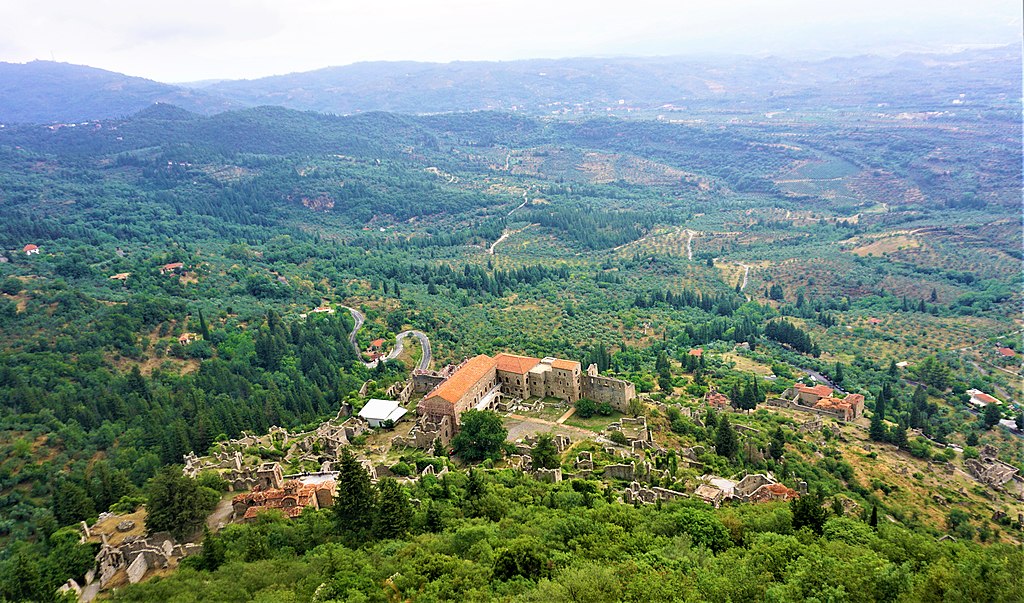 Mystras was a walled Medieval Greek town, near ancient Sparta, which served as the capital of a famous province of the Byzantine Empire. During its Byzantine period, between the mid-14th and mid-15th centuries, it experienced a magnificent cultural flowering. The site remained inhabited throughout the Ottoman period, until the 1830s when it was abandoned after the new town of Sparta was built, about eight kilometers to the east.

Mistra was ruled directly from Constantinople from 1262 but was then suzerain to the Despotate of the Morea from 1348 to 1460. During the Medieval era, the territory around Mystras in the southern part of Peloponnese, Greece, was called Morea and was one of the more fertile, populous and prosperous, even after the Black Plague in the mid-14th century. Mystras rivaled Constantinople in importance and became a stronghold of Greek Orthodoxy, which bitterly opposed attempts by the emperors to unite with the Roman Catholic Church, even though this would have allowed the empire to gain help from the west against the Ottomans.

The Ottomans began their conquest of the Balkans and Greece in the late 14th century. After the fall of Constantinople, the Ottomans then captured Athens and the Aegean islands by 1458 but left a Byzantine despotate in the Peloponnese until 1460. The Venetians still controlled Crete and some ports, but otherwise, the Ottomans controlled many regions of Greece except the mountains and heavily forested areas.

The last Despot of Morea surrendered the city to the Ottoman emperor Mehmed II in 1460. The Venetians occupied it from 1687 to 1715, but otherwise, the Ottomans held Mystras until the beginning of the Greek War of Independence in 1821. It was abandoned for the newly rebuilt town of Sparta during the reign of King Otto of Greece. Today the ruins of Mystras including the fortress, palace, churches, and monasteries, which all echo the Byzantine glory of Medieval Greece.

Morea was the name of the Peloponnese peninsula in southern Greece during the Middle Ages. The name was used for the Byzantine province known as the Despotate of the Morea, then during Ottoman rule, it was called Morea Eyalet, and then when held by the Republic of Venice for a short time, it was called the Kingdom of the Morea.

Mystras was called the ‘wonder of the Morea’ and evolved as an amphitheater town around the fortress erected in 1249 by the prince of Achaia, William of Villehardouin. Reconquered by the Byzantines, then occupied by the Turks and the brief Venetian period, the city was abandoned in 1832, leaving only the medieval ruins, standing in a breathtakingly historical time capsule and an open-air museum.

A Tour of the Fortified Medieval Mystras

Mystras was a fortified Medieval Greek town, near ancient Sparta, which served as the capital of an important province of the Byzantine Empire. During its Byzantine period, between the mid-14th and mid-15th centuries, it experienced a magnificent cultural flowering.

The Fortified Medieval city of Mystras is located on the high slopes of Taygetos Mountain. It is an archaeological site that stands above the modern village of Mystras and the town of Sparta.

The main Entrance of Mystras is to the lower town of the archaeological site of Mystras. Inside is a Byzantine settlement which developed in the 13th century and was the secular and religious authority of the Byzantine Empire in the Peloponnese

From 1348 it became the capital of Morea until the Ottomans conquered it in 1460. Inside is the preserved design of a Medieval town, a Frankish Castle, a Byzantine Palace plus houses, churches, art that has survived 700 years of human and environment attacks.

In the fortified Byzantine city, built on the slopes of a mountain, the terrain made it impossible to have a geometric street plan. The main thoroughfares of the town where not uniform in width and did not accommodate carts or facilitate the passage of wheeled vehicles. Members of the gentry were carried around in sedan chairs on the shoulders of four to eight chair carriers.

The main thoroughfares were called the “Royal,” “Despotic,” or “Middle” Streets, around which developed a loose network of lanes, back streets, alleys, which became a labyrinth with many cul-de-sacs.

The Metropolis of Mystra – Saint Demetrios

The Metropolis is in the Lower Town of Mistra and dates back to 1291. It was initially created as a three-nave basilica called Saint Demetrios. After various transformations, the Church evolved into a typical late Byzantine church with a cross-in-square church with five cupolas. This site is where the last Byzantine emperor, Constantinos Paleologos, was crowned in 1449.

One wing of the Church houses the Museum of Mystras, which exhibits and preserves a collection of sculptures, icons, Byzantine objects from the various churches in Mystras. 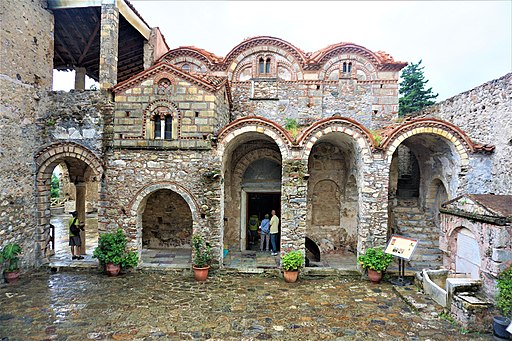 The Church of Our Lady Evangelistria is one of the Byzantine churches in the lower city of Mystras. The Church was built at the end of the fourteenth century, the passing of time has not been very kind to the painted interior, and few of the original frescoes still survive. 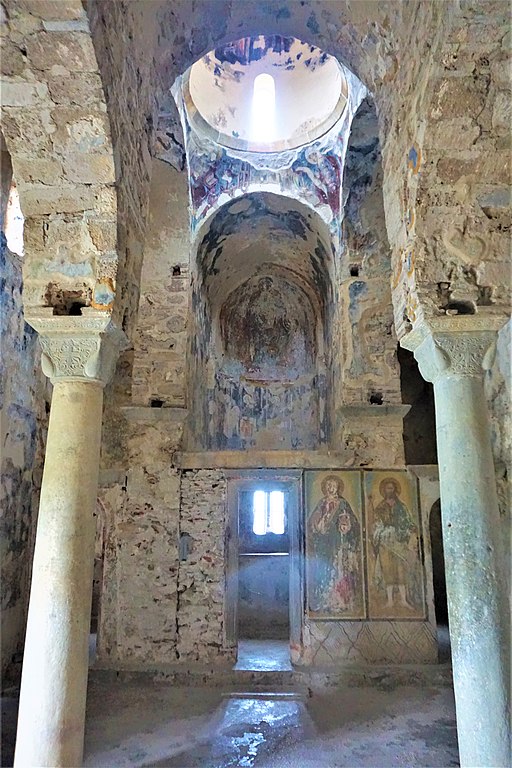 As the funerary Church, Evangelistria is simpler and more elegant than the larger Mystra Churches and is surrounded by graves and ossuaries.

The Church of Saints Theodores started construction in 1290. It was the main church or cathedral of a monastery, and then later, it became a cemetery church. The architecture of the Church is a variation of the typical Byzantine architecture with an octagonal dome. 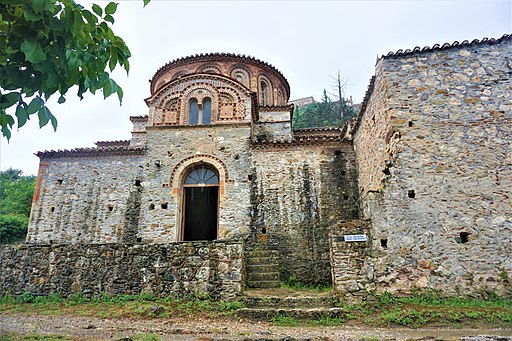 Unfortunately, the dome collapsed, and the Church was deserted. It was restored in the 20th century, so many of the frescos were lost.

In Mistras, there are several basilica plan churches with domed galleries that create a five-domed cross-in-square over a ground-level basilica plan. The Aphentiko at Brontochion Monastery was built about 1310. The Brontochion Monastery was a monastery in Mystras and the abbot incorporated into it the small Church of the Hodegetria, or “Aphentikon,” as the monastery’s catholicon or principal Church.

The Aphentiko may have been originally planned as a cross-in-square church, but has a blend of longitudinal and central plan components, with an interior divided into nave and aisles like a basilica.

The Monemvasia Gate is the entrance to the lower town from the upper town and a defensive gate. 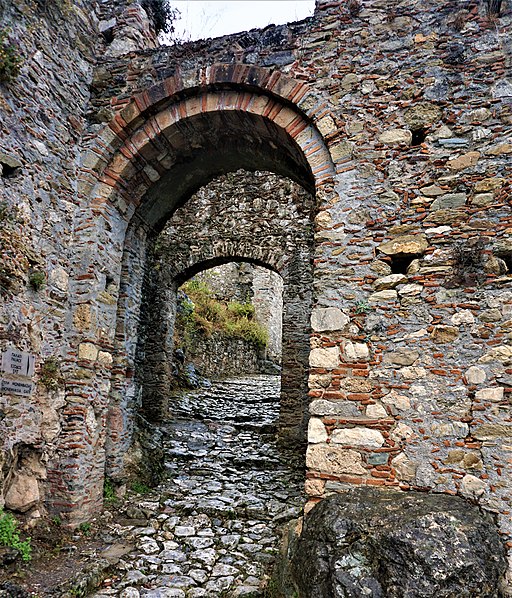 It is named after Monemvasia, which is a town on a small island off the east coast of the Peloponnese. The island is linked to the mainland by a short causeway 200m in length. Its area consists mostly of a vast plateau above sea level and the site of a mighty Byzantine medieval fortress.

St. Nicholas Church was built in the 17th century, during the Ottoman Era. Some small parts of frescoes have survived.

The Palace of the Despots overlooks the square of Ano Chora and dominates the Upper Town of Mystra with an enormous complex of buildings built at different periods. Built started under the Franks, possibly by Guillaume de Villehardouin, and were completed by the late Byzantine period. The complex started as the administrative office for the region. It then served as the residence of the governor and later the despots. The Despots were sometimes the emperor’s second son.

The building complex is in an L-shaped and has been reasonably preserved and consists of four-story and two-story mansions providing for the residence of the noblemen and a throne hall. The Despot used to live in a four-story construction dating from 1350-1400 A.D. Later, the Palace of the Paleologos family which was built in the 15th century. The buildings consist of numerous arches, chambers, attics, and cellars. The Palace of the Despots is also known as the Palataki mansion, which means the small Palace, in contrast to the big Palace of Constantinople. The emperor, Manuel II Palaiologos, stayed in Mystras for long periods in the years 1408 and 1415. A magnificent throne room was located on the uppermost floor of the final extension, with a balcony overlooking the square.

The Church of Saint Theodoroi in Mystras Peloponnese is the oldest and largest chapel in Mystras. It is located in Kato Hora (lower town), the lowest part of Mystras Old Town. The construction started in 1290. Initially, it was the main church or cathedral of a monastery, and then it became a cemetery church. The architecture of the Church is a variation of the usual Byzantine architecture with an octagonal dome.

The interior of the Church has impressive frescoes that date from the 13th century, such as the portraits of the Emperor Manuel Paleologos. Unfortunately, the dome collapsed, and the Church was deserted until it was restored in the 20th century, so many of the frescos were lost. A few of the visible saints depicted belonged to a battalion of armed saints that covered to lower walls and were composed to be at eye level with the faithful to reassure them.

The ancient custom of burying the dead outside the city walls was the custom of the earliest Christians. However, burials within a city were officially allowed in the late 9th century AD. Christians then started grouping graves together in graveyards, which were typically around their churches. In late Byzantium, tombs inside churches became standard for the elites. In this Church, there is also the tomb of the Despot of Peloponnese Theodore I.

One of the more famous people to have worked and died in Mystras was Gemistus Pletho. He died in about 1452, however, in 1466, some of his Italian disciples, stole his remains from Mistra and interred them in the Tempio Malatestiano in Rimini, “so that the great Teacher may be among free men” because at this time the Byzantine Empire had fallen to the Ottomans who had overrun Greece.

Georgius  Plethon (1355/1360 – 1452/1454) was one of the most renowned philosophers of the late Byzantine era. In Mistra, he taught and wrote philosophy, astronomy, history, geography, and studied the classical writers. He pioneered the revival of Greek scholarship in Western Europe and made Plato’s ideas accessible. Despite suspicions of heresy from the Church, he was held in high Imperial favor.

In his Book of Laws, which was only circulated among close friends when he was alive, he promoted the return of ancient wisdom of the Greeks, Zoroaster, and the Magi. 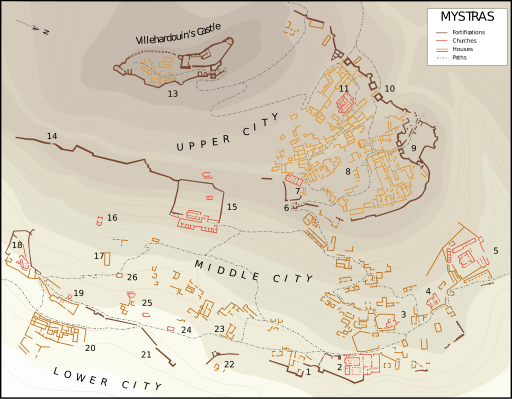 Mystras is an open-air archaeological site on the foothills of Mount Taygotos, and some areas are built on steep and rocky hills that may be difficult to access for the disabled. Flat, comfortable shoes are highly recommended, as is a hat and water during summer. Visiting Tips include:

“Happiness can only be achieved by looking inward and learning to enjoy whatever life has, and this requires transforming into gratitude.”
– Saint John Chrysostom