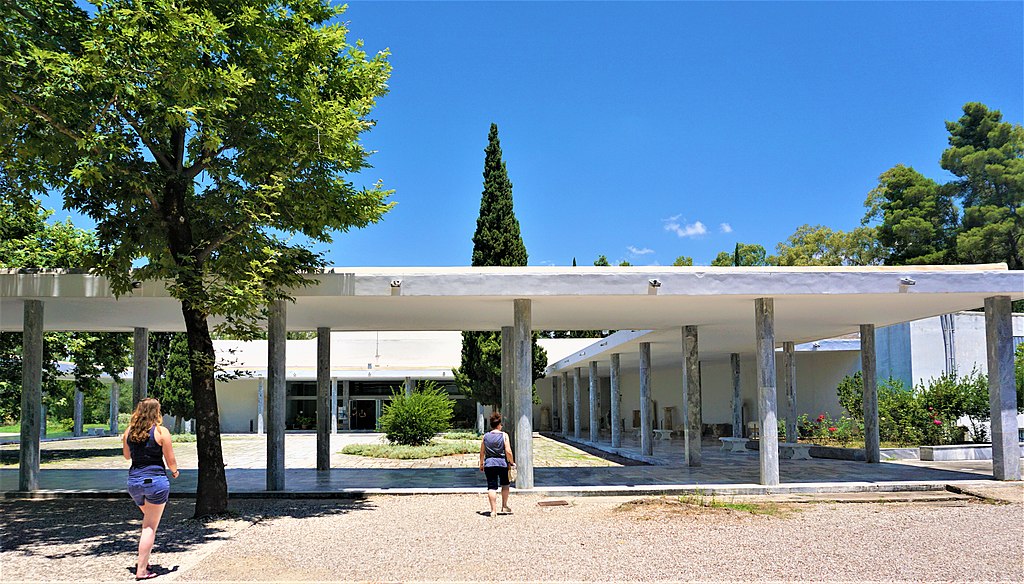 The Archaeological Museum of Olympia, in Olympia, first opened in 1882, making it was the first modern museum in Greece outside of Athens. The museum collection includes discoveries from the surrounding area, including the site of the Ancient Olympic Games. The collection consists of objects from prehistory to its time under Roman rule.

Today, the museum’s principal building has twelve rooms for exhibitions, organized both around themes and ages of the objects. The rooms are:

Floor Plan for the Archaeological Museum of Olympia 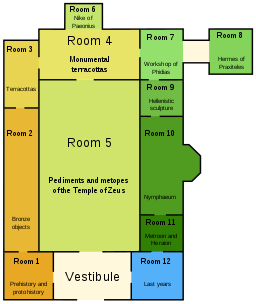 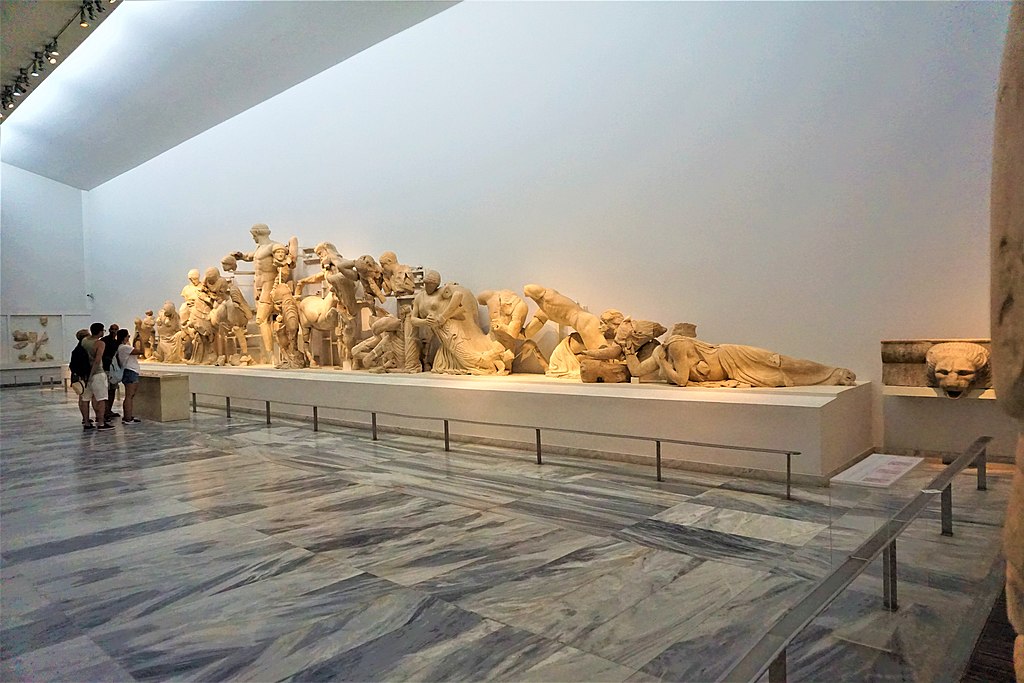 The Nike of Paionios is an ancient statue of the Greek goddess of victory, Nike. The statue shows Nike landing gently on her left foot, with the drapery blown against her body and behind her. Created by Paionios in 425–420 BC, he created a masterpiece with a sense of buoyancy, speed, and grace. This restored depiction was created from the many precious fragments excavated at Olympia in 1875.

Nike, in ancient Greek religion, was a goddess who personified victory. Her Roman equivalent was Victoria. Nike is seen with wings in most statues and paintings, with one of the most famous being the Winged Victory of Samothrace. Nike is the goddess of strength, speed, and victory and is one of the most commonly portrayed figures on Greek coins. Famous Nike statues were commissioned and erected after significant victories.

Hermes and the Infant Dionysus is an ancient Greek sculpture of Hermes, and the infant Dionysus discovered in 1877 in the ruins of the Temple of Hera, Olympia, in Greece. According to the myth, Zeus gave the infant Dionysus to the care of Hermes to hide him from Hera’s wrath, as Dionysus was the only god born from a mortal mother and Zeus. Hermes is represented in the act of carrying the child Dionysus to the nymphs who he charged with his rearing. The uplifted right arm is missing but may have held out to the child a bunch of grapes to symbolize his future as the god of wine.

An earthquake hit the Olympia site during the reign of the Roman emperor Diocletian in the last years of the 3rd century C.E. The quake resulted in the collapse of the roof of the Temple of Hera and burying this statue in the rubble.  The excavations uncovered the body consisting of head, torso, legs, left arm of a statue of a young man resting against a tree trunk covered by a mantle. A thick clay layer above it protected the statue, so it was in a good state of preservation. Further excavations uncover the rest of the figure as it is displayed today.

This Statue of Zeus and Ganymede depicts Zeus carrying the boy Ganymede off to Mount Olympus. This Archaic Greek terracotta was created in the first quarter of the fifth century and found at the Archaeological site of Olympia. The sculpture depicts a Greek mythology story, in which Zeus falls in love with Ganymede’s beauty and abducts him to serve as cup-bearer in Olympus. 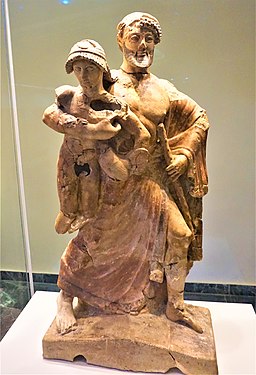 This Statue of Zeus and Ganymede is one of the earliest works of Greek art in which the eyes are depicted more expressively and not just directly staring straight ahead, as was previously the norm.

Quotes about the Olympics

“The most important thing in the Olympic Games is not winning but taking part; the essential thing in life is not conquering but fighting well.”
– Pierre de Coubertin – founder of the modern Olympic Games

“You have to believe in yourself when no one else does — that makes you a winner right there.”
– Venus Williams – four-time Olympic gold medalist, tennis

“I don’t run away from a challenge because I am afraid. Instead, I run toward it because the only way to escape fear is to trample it beneath your feet.”
– Nadia Comaneci, gold-medal gymnast

“This ability to conquer oneself is no doubt the most precious of all things sports bestows.”
– Olga Korbut four-time medalist, gymnastics

“The Olympics remain the most compelling search for excellence that exists in sport, and maybe in life itself.”
– Dawn Fraser – Australian Olympic Champion