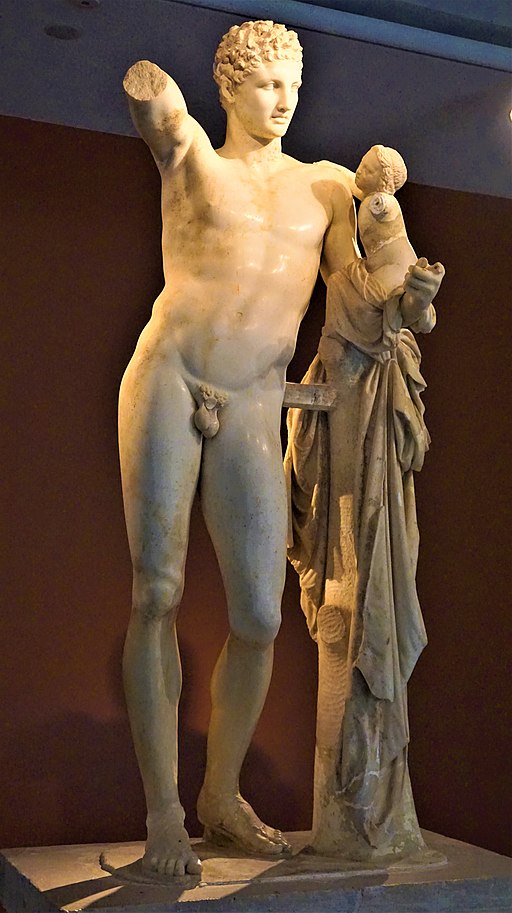 Hermes and the Infant Dionysus is an ancient Greek sculpture of Hermes and the infant Dionysus discovered in 1877 in the ruins of the Temple of Hera, Olympia, in Greece. According to the myth, Zeus gave the infant Dionysus to the care of Hermes to hide him from Hera’s wrath, as Dionysus was the only god born from a mortal mother and Zeus. Hermes is represented in the act of carrying the child Dionysus to the nymphs who he charged with his rearing. The uplifted right arm is missing but may have held out to the child a bunch of grapes to symbolize his future as the god of wine.

Early historians attributed this masterpiece to Praxiteles and dated to the 4th century B.C. However, this attribution is fiercely contested among art historians, as no ancient replicas of it have been identified. An earthquake hit the Olympia site during the reign of the Roman emperor Diocletian in the last years of the 3rd century C.E. This earthquake resulted in the collapse of the roof of the Temple of Hera and burying this statue in the rubble.  The excavations uncovered the body consisting of head, torso, legs, left arm of a statue of a young man resting against a tree trunk covered by a mantle. A thick clay layer above it protected the statue, so it was in a good state of preservation. Further excavations uncover the rest of the figure as it is displayed today.

Hermes was the ancient Greek god of trade, commerce, sports, and athletes.  Hermes was also viewed as the protector and patron of roads and travelers. He was the second youngest of the Olympian gods, and Dionysus being the youngest. This statue shows Hermes with his half-infant brother Dionysus in his arm. They both had the same father, Zeus, the king of the gods of Mount Olympus.

In the Roman adaptation of the Greek pantheon, Hermes is identified with the Roman god Mercury.

Dionysus was the Ancient Greek god of wine, fertility, ritual madness, religious ecstasy, and theater. Wine played an important role in Greek culture, and the cult of Dionysus was the main religious focus for its unrestrained consumption. He was a popular figure in Greek mythology and religion, becoming increasingly important over time, his festivals were the driving force behind the development of Greek theater. The Romans identified Dionysus with the Roman god Bacchus.

Praxiteles was the most renowned of the Attic sculptors of the 4th century B.C. He was the first to sculpt the nude female form in a life-size statue. While no undisputed attributable sculpture by Praxiteles has survived, many copies of his works have survived. Praxiteles and his school worked almost entirely in marble.