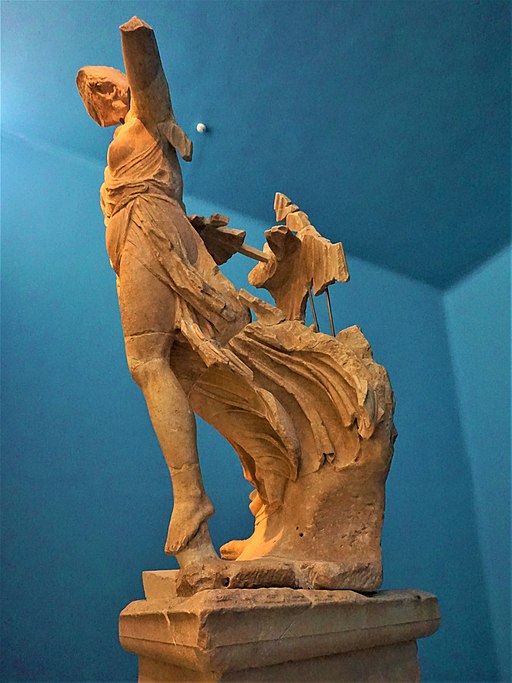 The Nike of Paionios is a statue of the Greek goddess of victory, Nike. The statue shows Nike landing gently on her left foot, with her drapery blown against her body and behind her.

The sculptor Paionios created this masterpiece with a sense of buoyancy, speed, and grace in 425 BC. The goddess is represented as if in descending flight, positioned upon a pedestal high above the viewer.

She seems to be flying with her draperies, blown by the wind, and forming a background for her figure. Her drapery would have been painted red as a contrast to the blue sky and the pale marble colors of the temple.

This restored depiction was created from the many precious fragments excavated at Olympia in 1875. The restoration is lacking significant pieces, including Nike’s wings.

The figure had initially stood near the Temple of Zeus in the center of Ancient Olympia on a three-sided triangular pillar 6-meter high.

The statue has an inscription that indicates the sculpture was installed to honor the recapture of the island Sphacteria by the Athenian allies from the Spartans in 425 BC.

The Nike of Paeonius was erected a few years after the Athenian allies defeated the Spartans at the Battle of Sphacteria in 425 BC.

The placement of this dedicatory statue at Olympia, considered Spartan ground, was a deliberate and assertive act of political propaganda.

This sculpture may be understood as political propaganda within the context of the Messenian Wars. At least a century earlier, the Spartans had erected a statue of Zeus in the sanctuary, commemorating their victory over the Messenians.

This piece of artwork is invaluable for understanding the history of Greek artistic and dedicatory work. Nike of Paionios also demonstrates that art was used as political propaganda, which in turn, funded artists and allowed them to create exquisite beauty.

Nike, in the Ancient Greek religion and methodology, was the goddess who personified victory. Her Roman equivalent was Victoria.

Nike is seen with wings in most statues and paintings, with one of the most famous being the Winged Victory of Samothrace.

Nike is the goddess of strength, speed, and victory and is one of the most commonly portrayed figures on Greek coins. Famous Nike statues were commissioned and erected after significant achievements.

Paeonius was a Greek sculptor of the late 5th century BC. He adapted Athenian stylistic elements into his work, based upon his interaction with the Olympia workshop of Pheidias.

This Nike statue commemorates this 425 BC victory at Sphacteria, which is a small island at the entrance to the bay of Pylos in the Peloponnese, Greece. It was the site of three critical battles:

The 425 BC Battle of Sphacteria was a land battle of the Peloponnesian War, fought between Athens and Sparta.

The Archaeological Museum of Olympia – Greece

Nike: The Goddess of Victory – Mythology