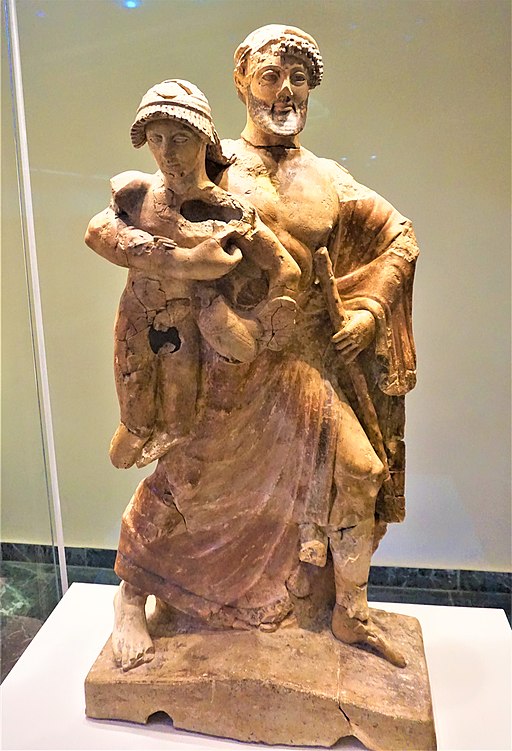 This Statue of Zeus and Ganymede depicts Zeus carrying the boy Ganymede off to Mount Olympus. This Greek terracotta was created in the first quarter of the fifth century. It was found at the Archaeological site of Olympia.

The sculpture depicts a Greek mythology story, in which Zeus falls in love with Ganymede’s beauty and abducts him to serve as cup-bearer in Olympus.

The homoerotic connection between an adult man and a youth was not disapproved of by ancient Greek culture. If kept within certain limits, it formed part of an aristocratic ideal.

As a god, Zeus could transgress those mortal limits and steal the youth away.

“Ganymedes was the loveliest born of the race of mortals, and therefore
the gods caught him away to themselves, to be Zeus’ wine-pourer,
for the sake of his beauty so that he might be among the immortals.”

The group was probably an architectural ornament mounted at the apex or corner of the pediment of a classical Greek building, most likely one of the many treasuries at Olympia.

The size of the figure is less than life-size, but well over the average size for terracotta figures. The work is dated to around 480-470 BC.

This was the transitional period between the Archaic and the Classical periods and is attributed to a Corinthian workshop.

This statue is one of the earliest works of Greek art in which the eyes are depicted more expressively rather than simply staring straight ahead, as was previously the norm.

Zeus abducted Ganymede from near Troy while Ganymede had been tending sheep, a humble pursuit characteristic of a hero’s boyhood before his destiny is revealed.

Zeus turned into an eagle to transport the youth to Mount Olympus. In poetry, Ganymede became a symbol for the beautiful young male who attracted desire and love.

Ganymede is referenced by various ancient Greek and Roman authors including:

Zeus and Ganymede: The Cup-Bearer of the Gods – Greek Mythology

Zeus and Ganymede — The Greek Myth