Akrotiri was a Minoan Bronze Age settlement on the volcanic Greek island of Santorini (Thera). The civilization of this ancient settlement was affiliated with the early Cretan culture.

The Akrotiri settlement was destroyed in the Theran volcano eruption sometime in the 16th century BC, which buried this site in volcanic ash.

The ash preserved the remains of buildings, streets, frescoes, and many artifacts and artworks.

This site was first excavated in 1967, and there is a debate about whether this site was the inspiration for Plato’s story of Atlantis.

Whether the far-reaching and disastrous events at this site were the seeds of the Atlantis story, or not, the violent destruction of the original island certainly had global impacts.

The earliest evidence for human habitation of Akrotiri was as early as the 5th millennium BC when Akrotiri was a small fishing and farming village.

By the end of the third millennium, this community had significantly developed and expanded due to the trade relations it established with other cultures in the Aegean.

Akrotiri’s strategic position on the primary coastal sailing route between Cyprus and Minoan Crete also made it an essential point for the copper trade, thus allowing Akrotiri to become an essential center for processing copper.

Paved streets demonstrate Akrotiri’s prosperity, as did the extensive drainage system, the production of high-quality pottery, and craft specialization, which all point to a high level of sophistication.

The settlement all came to an end, however, with the volcanic eruption probably between 1570 to 1500 BC. Egyptian New Kingdom records refer to a vast explosion with widespread impacts at about this time in the Aegean Sea.

On Santorini, there is a 60 m (200 ft) thick layer of white volcanic material that is delineating the ground level before the eruption.

This layer has three distinct bands that indicate the different phases of the explosion. The thinness of the first ash layer suggests that the volcano gave the local population a few months’ warning.

Since no human remains have been found at the Akrotiri site, this preliminary volcanic activity probably caused the island’s population to flee.

The earliest excavations on Santorini were conducted in 1867; however, an extensive modern dig on the Akrotiri Archaeological Site was not started until 1967, which quickly revealed the full significance of this site.

The site was preserved in thick, volcanic debris so that many of the buildings were preserved to a height of more than a single story, creating unique challenges for excavation.

Excavated artifacts can be found Museum of Prehistoric Thera in central Santorini. Only a single gold object has been found, hidden beneath flooring, and no uninterred human skeletal remains have been found.

This discovery indicates that there must have been warnings of impending doom and that there was an orderly evacuation undertaken before the main destructive explosion, which would have led to a significant loss of life, similar to the Pompeii volcanic explosion.

Telchines Road is the most extensive section of road excavated so far at the Akrotiri Archaeological Site.

Telchines Road road travels down from the north of the settlement and leads to the harbor. In the roofed area of the excavation, it is the main road.

The road passes in front of the buildings which have been excavated.

In Greek mythology, the Telchines were the original inhabitants of the island of Rhodes and were known in Crete and Cyprus.

They were regarded as excellent metallurgists, skilled metal workers in brass and iron.

According to mythology, the gods eventually killed them because they began to produced a mixture of Stygian water and sulfur, which killed animals and plants.

Accounts vary on how exactly they were destroyed by flood, or Zeus’s thunderbolt, or Poseidon’s trident.

The Pithoi Storeroom was the name given by the leading archaeologist to this first building that was excavated in 1967 at the Akrotiri Archaeological Site.

What the archaeologist found was a room full of large storage jars called Pithoi by the Greeks.

These storage jars were used extensively in the Bronze Age economies such as Akrotiri for storing or shipping wine, olive oil, or various types of vegetable products.

Pithos is the Greek name for a large storage container. It has been applied to such containers used among the civilizations that bordered the Mediterranean Sea in the Neolithic, the Bronze Age, and Iron Age.

Pithoi had been used for bulk storage, primarily for fluids and grains; they were comparable to the drums, barrels, and casks of recent times.

Discarded pithoi found other uses, such as bathtubs, for burials, and sometimes the bones of the interred were placed in pithoi.

Pithoi were manufactured and exported or imported all over the entire Mediterranean.

Atlantis is a fictional island mentioned in Plato’s works. However, there is a debate on what served as its inspiration. Did Plato borrowed from older traditions and legends?

Was one possible motivation of Atlantis the ‘Thera Eruption’ documented in Egyptian records?

The Thera eruption was one of the most significant volcanic events on Earth in recorded history.

The volcano ejected up to four times as much as the well-recorded eruption by Krakatoa in 1883.

It devastated the island of Thera, including the Minoan settlement at Akrotiri and communities on nearby islands and to the coast of Crete with a tsunami.

The eruption at Akrotiri had global effects from its significant ashfall. Firstly the massive explosion caused an environmental and economic crisis in the Minoan civilization of Crete and other island communities, making them vulnerable to the later conquest by the Mycenaeans.

In Egypt, the ‘Tempest Stele of Ahmose I,’ describes apocalyptic rainstorms, which devastated much of Egypt, and these have been attributed to short-term climatic changes caused by the Thera eruption.

Some have sought to link the eruption at Santorini (c 1600 BCE) to the Exodus of the Israelites from Egypt, as told in the Bible.

In China, a volcanic winter described as a “yellow fog, a dim sun, then three suns, frost in July, famine, and the withering of all five kinds of cereal.”

These events in the late 17th century BCE correlate with entries in later Chinese records documenting the collapse of the Xia dynasty in China. 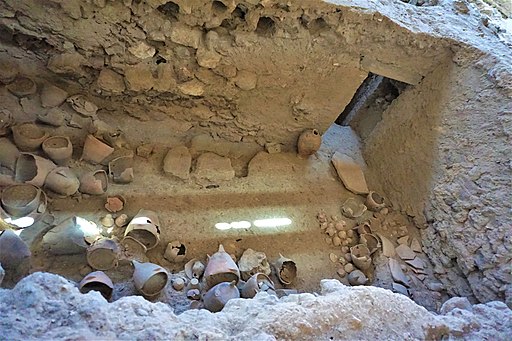 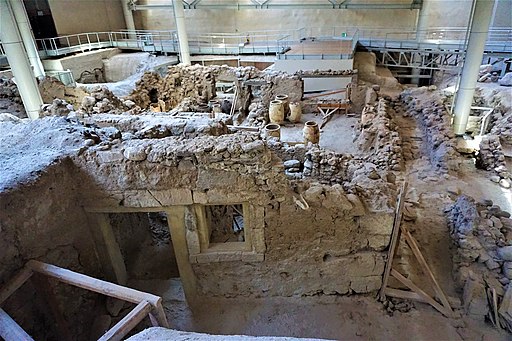 Telchines Road is the most significant section of road excavated so far at the Akrotiri Archaeological Site. 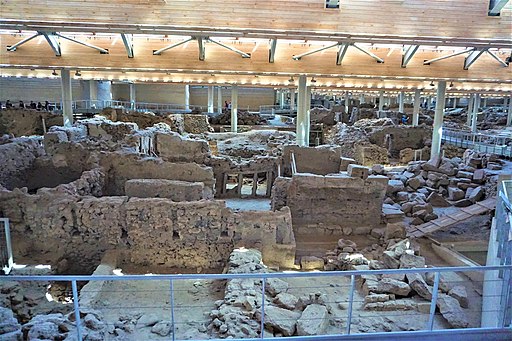 The extensive modern excavation started in 1967 revealed the full value of this site.

The site was preserved in thick, volcanic debris so that many of the buildings were preserved to a height of more than a single story, creating unique challenges for excavation.

Excavated artifacts can be found Museum of Prehistoric Thera in central Santorini.

Only a single gold object has been found, hidden beneath flooring, and no uninterred human skeletal remains have been found.

This discovery indicates that an orderly evacuation was undertaken early before the main destructive explosion with little loss of life.