In 379, the Edict of Thessalonica made Christianity the state religion of the Roman Empire. By the time of the Fall of Rome in 476, Thessaloniki was the second-largest city of the Eastern Roman Empire.

In the Byzantine Empire, Thessaloniki was considered the second city in the Empire after Constantinople. The city held this status until its transfer to Venetian control in 1423. In the 14th century, the city’s population exceeded 100,000, making it larger than London at the time.

A Tour of Early Christian and Byzantine Churches

Catacombs of St. John the Baptist

The Catacombs of St. John the Baptist are hidden from view, in one of the most crowded areas of Thessaloniki, because they are located nearly 5 meters below the street level. The submerged site hosts the ancient Monastery and the Catacombs of Saint John. In the gardens of the catacombs, are the ruins of an ancient nymphaeum. The nymphaeum was centered on a spring dedicated to the nymphs. The later thermal baths date from Roman times. The pagan nymphaeum was converted into a holy water spring during the Christian times, and an underground church and monastery were built there in honor of St. John the Baptist.

A Tour of the Catacombs of St. John the Baptist 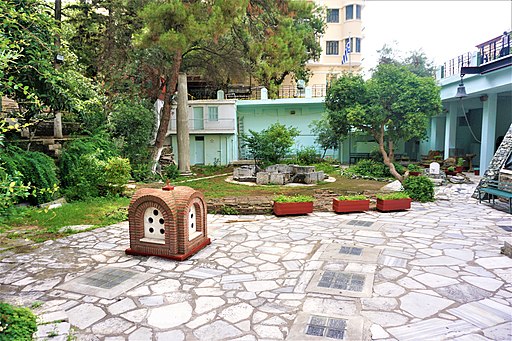 The Catacombs of St. John the Baptist are located south of the Church of Hagia Sophia, and today the catacombs still retain their original structure with stairs that lead you even deeper into the ancient catacombs. Before being used by Christians as a religious sanctuary, it is believed that the tunnels were part of an extended aqueduct system built during the Roman era. Archaeological evidence suggests an even earlier use of the site as a pagan temple devoted to ancient deities.

The underground site of the Crypt was initially built during Roman times as part of a bathing complex and later converted to a Crypt and used as a place of worship by the early Christians of Thessaloniki. According to tradition, Saint Dimitrios was imprisoned here and died in 303 A.D. The crypt is a well-preserved because it became lost and unknown for many centuries until it was re-discovered after the Great Thessaloniki Fire of 1917, that devastated the city center. 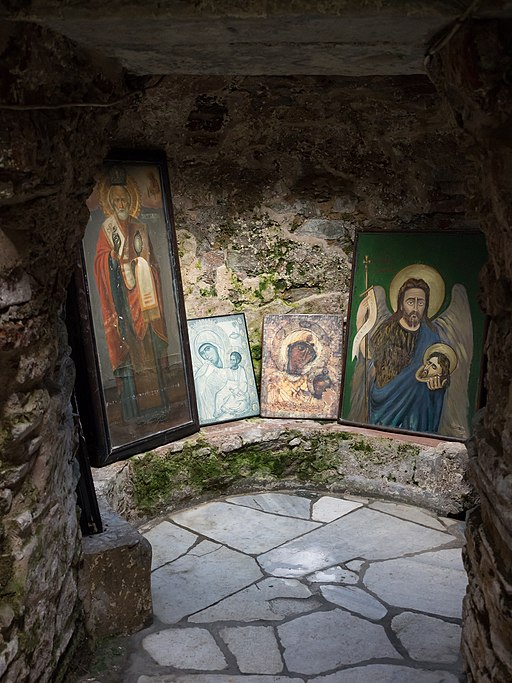 These catacombs, like others in the ancient world, may have been connected to a more extensive underground network of tunnels that once existed beneath the city that were destroyed or remain forgotten. Tunnels like these were created for defensive purposes and date back to an ancient period of Thessaloniki’s history.

A nymphaeum in ancient Greece and Rome was a monument consecrated to the nymphs and usually located near natural springs. These monuments were built on natural grottoes, which tradition assigned as habitations to the local nymphs. They supplied a stable water source.

Catacombs of St. John the Baptist

Church of Metamorphosis tou Sotiros was probably built as a burial church to a Byzantine monastery. The church is a charming little Byzantine church with a high dome in the rare tetraconch architectural style. Constructed in the 14th century, its original form was a square with the dome. The narthex to the west was added during a later period.

Inside the church, the rare frescoes and mural decor are contemporary to the church founding and part of the Paleologan tradition. Paleologan refers to the time when the Byzantine Empire was ruled by the Palaiologoi dynasty in the period between 1261 and 1453 AD, representing the artistic period just before the Fall of Constantinople to the Ottoman Empire.

The narthex is an architectural element typical of early Byzantine churches consisting of the entrance or lobby area, located at the west end of the nave, opposite the church’s main altar.

A tetraconch, from the Greek for “four shells,” as in this example, is a church or with four apses, one in each direction of equal size. The original ground plan of the building is, therefore, a Greek cross. They are most common in Byzantine architecture.

In Christian teachings, the Transfiguration is a pivotal moment in the story of Jesus. The setting on Transfiguration on the mountain is presented as the point where human nature meets God. The meeting place for the temporal and the eternal, with Jesus as the connecting point, the bridge between heaven and earth.

Many Christian traditions, including the Eastern Orthodox, Roman Catholic, and Anglican churches, commemorate the event as a major festival during the Feast of the Transfiguration. 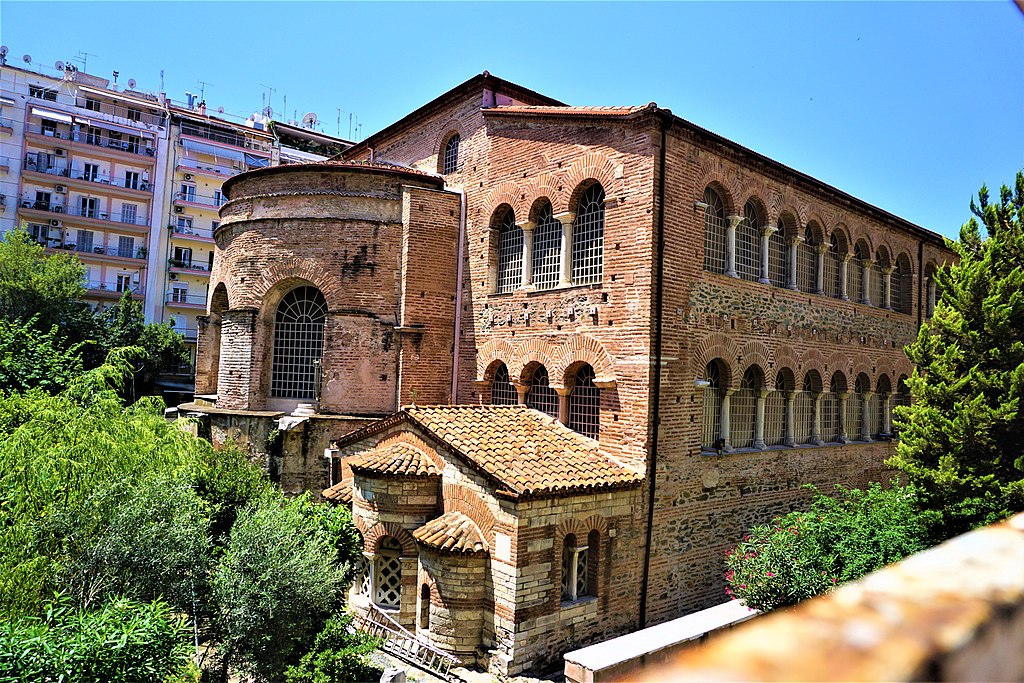 The Church of the Acheiropoietos is a Byzantine church dated from its bricks and mosaics to ca. 450–470, making it one of the earliest of the Thessaloniki’s surviving churches, although it was modified in the 7th and again in the 14th–15th centuries. The building is a three-aisled basilica, some 28 m wide and 36.5 m long, with a wooden roof. The three aisles are separated by columns, while the two side aisles have galleries above them.

The current entrance is through a triple-arched opening that connects the narthex with the central nave. The surviving parts of the church’s original interior decoration include 5th-century Ionian capitals, the green Thessalian marble columns, the original Proconnesian marble pavement of the central nave, and fragments of 5th-century decorative mosaics. Early 13th-century frescoes depicting the Forty Martyrs of Sebaste adorn the southern side. Underneath the north aisle’s current pavement, floor mosaics from a previous Roman-era bath have been uncovered.

Church of the Acheiropoietos Tour

After the Ottoman conquest of the Thessaloniki in 1430, the Acheiropoietos was converted into a mosque by Sultan Murad II. Throughout the Ottoman period, it remained the city’s principal mosque under the name Eski Camii (“Old Mosque”). 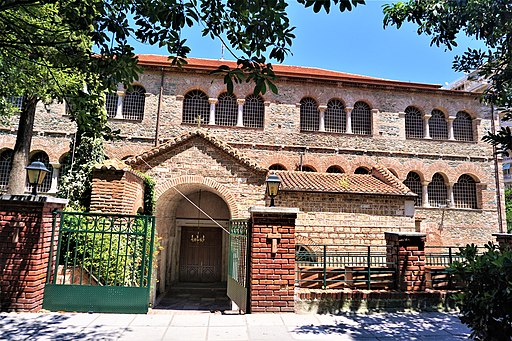 The current entrance is through a triple-arched opening that connects the narthex with the central nave. 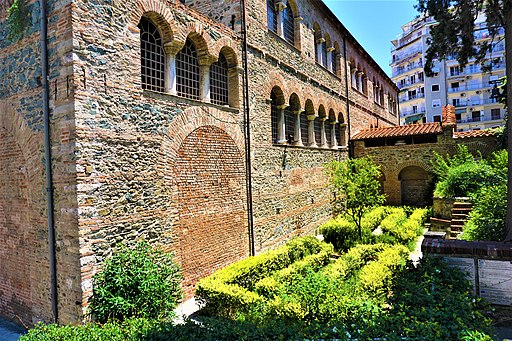 The entranceway, which connected the church with the city’s Byzantine-era thoroughfare.

The surviving parts of the church’s original interior decoration include 5th-century Ionian capitals, the green Thessalian marble columns, the original Proconnesian marble pavement of the central nave, and fragments of 5th-century decorative mosaics.

The building is a three-aisled basilica, some 28 m wide and 36.5 m long, with a wooden roof. The three aisles are separated by columns, while the two side aisles have galleries above them. 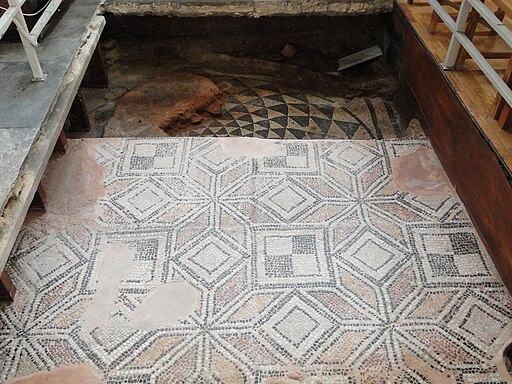 Floor mosaics from an earlier Roman-era bath have been uncovered.

Byzantine Mosaics in the Church of the Acheiropoietos

“Rather let the crime of the guilty go unpunished than condemn the innocent.”
– Emperor Justinian I