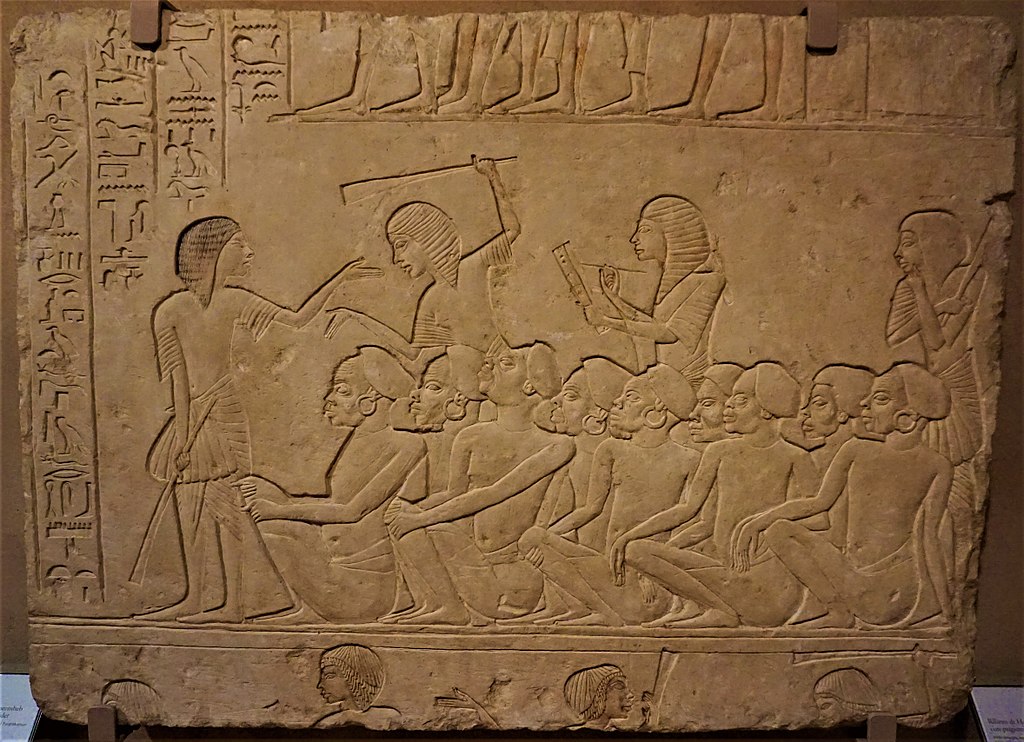 Relief of Horemheb with Nubian Prisoners

This Relief of Horemheb with Nubian Prisoners shows Nubian prisoners with Negroid features, tightly curled hair, and earrings, who are seated on the ground submissively as Egyptian soldiers with batons watch over them.

Depicted in sunk relief is also a scribe who is writing a report.  This sculptured relief was part of a larger composition depicting foreign prisoners of war.

It also celebrated the prowess of Horemheb, the general commander of the army, who took prisoners after military campaigns.

This limestone relief with traces of painting from the Saqqara tomb of Horemheb dates to the reign of Tutankhamun. Horemheb was the commander-in-chief of the army under the sovereignty of Tutankhamun and Ay.

After he acceded to the throne, as the Pharaoh, official action was taken against the preceding Amarna rulers.

He is considered to have established traditional religion after the Amarna Period. He ruled for 14 years and was not related to the preceding royal family.

Before he became Pharaoh, Horemheb was the commander-in-chief of the army under the reigns of Tutankhamun and Ay.

After he acceded to the throne, he reformed the Egyptian state and restabilized his country after the divisive Amarna Period.

Horemheb usurped Tutankhamun monuments and maybe the key reason that Tutankhamun was not as well-known before the discovery of Tutankhamun’s tomb.

Horemheb presumably remained childless since he appointed his vizier Paramesse as his successor, who would assume the throne as Ramesses I.

Relief of Horemheb with Nubian Prisoners

Exhibits of the Archaeological Civic Museum

Haremhab: General and King of Egypt

“People bring about their own undoing through their tongues.”
– Egyptian Proverbs