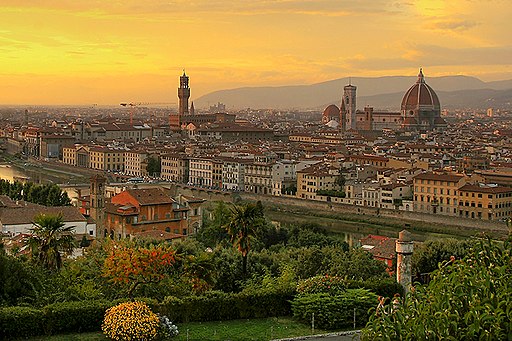 Florence is the capital city and largest city of Tuscany, a region of Italy. The city was a center of medieval European finance and one of the wealthiest cities of that era.

Florence is considered the birthplace of the Renaissance, and has been called “the Athens of the Middle Ages.”

Florence is one of the most beautiful cities in the world and famous for its culture, Renaissance art and architecture, and monuments. The city has many museums and art galleries.

Virtual Tour of the Museums in Florence

Highlights Tour of the Museums of Florence

The Uffizi Gallery is located in the historical Centre of Florence and is one of the largest and best-known museums in the world. It holds a collection of priceless works, mainly from the period of the Italian Renaissance.

The gallery had been open to visitors by request since the sixteenth century, and in 1765 it was officially opened to the public, formally becoming a museum in 1865.

The Uffizi building began in 1560 to accommodate the offices of the city’s magistrates, hence the name Uffizi or “offices.” The top floor was made into a gallery for the family and their guests and included their collection of Roman sculptures.

The gallery was intended to display the artworks of the Medici collections, and it became famous and an essential attraction of a Grand Tour.

Over the years, larger sections of the palace were converted into exhibition spaces for paintings and sculptures collected or commissioned by the Medici.

Leonardo da Vinci and Michelangelo frequented the Uffizi to look at the collection. Today, the Uffizi is one of the essential tourist attractions of Florence and one of the most visited art museums in the world.

The Galleria dell’Accademia di Firenze, or “Gallery of the Academy of Florence,” is best known as the home of Michelangelo ‘s sculpture David.

It also includes other Michelangelo sculptures and a collection of paintings by Florentine artists, mostly from the 1300-1600 period.

Masterpieces of the Galleria dell’Accademia di Firenze, include: “David,” “Young Slave” and “Bearded Slave” by Michelangelo

The Palazzo Pitti is a vast, mainly Renaissance palace, a short distance from the Ponte Vecchio. The palazzo dated from 1458 and was formerly the town residence of a Florentine banker.

The Medici family bought the palace in 1549 and became the chief residence of the ruling families of the Grand Duchy of Tuscany. It grew as a great treasure house as later generations amassed paintings, jewelry, and art.

The Palazzo is now the largest museum complex in Florence. It is divided into several principal galleries or museums that include: Palatine Gallery, Royal Apartments, Gallery of Modern Art, Silver Museum, Porcelain Museum, Costume Gallery, Carriages and Museum

“Under the shadow of a stately Pile,
The dome of Florence, pensive and alone,
Nor giving heed to aught that passed the while,
I stood, and gazed upon a marble stone,
The laurelled Dante’s favourite seat. A throne.”
– William Wordsworth