“David” by Michelangelo was completed in 1504 and depicts the Biblical hero David, who killed the giant Goliath with a rock from his sling.

David is represented just before his battle with Goliath, tense and ready for combat, Michelangelo has captured the moment between decision and action, during the war between Israel and the Philistines.

David’s brow is focused, his neck tense, his veins are bulge out, he holds a sling draped over his shoulder in his left hand, and he holds a rock in his right hand.

The twist of his body conveys motion and is achieved with the contrapposto technique developed by the Greeks for their standing heroic male nude.

The figure stands with one leg holding its full weight and the other leg forward. Michelangelo has emphasized the contrapposto technique by the turn of the head to the left, and by the contrasting positions of the arms.

David was initially commissioned as one of a series of statues of the prophets to be positioned along the roofline of the east end of Florence Cathedral.

However, due to the more than six-ton weight of the “David,” it could not be placed on the roof of the cathedral. David was a favored subject in the art of Florence.

So Michelangelo’s statue was placed instead in a public square, outside the Palazzo Vecchio, which was the seat of Civic Government in Florence.

David, the giant-killer, had long been seen as a political symbol in Florence. The statue came to symbolize the civil liberties embodied in the Republic of Florence, an independent city-state that had powerful rivals.

The eyes of the “David,” which had a steady glare, were turned towards Rome. 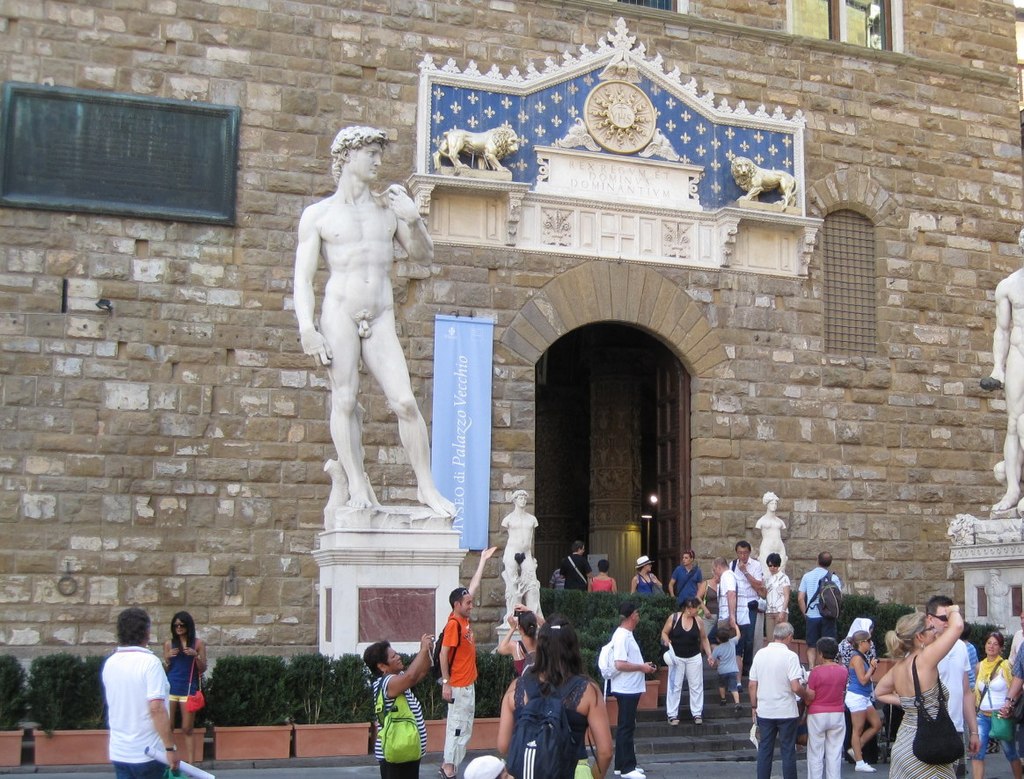 A replica of David now stands outside the Palazzo Vecchio

In 1873, the statue of David was removed from the Piazza, to protect it from damage. It is displayed in the Accademia Gallery, and a replica was placed in the Piazza in 1910.

Michelangelo is one of the greatest artists of all time. He is considered as a contender for the title of the leading representative of Renaissance man, along with his rival, Leonardo da Vinci.

Five years before the debut of the “David,” Michelangelo’s Pieta had already made him famous, but the “David” defined the 29-year-old artist as a master sculptor of the High Renaissance.

Four years later, in 1508, Michelangelo began work on his greatest painting achievement in the Sistine Chapel.

Facts You Should Know About Michelangelo’s David

Michelangelo’s David: The Story of an Icon

“I saw the angel in the marble and carved until I set him free.”

“Trifles make perfection, and perfection is no trifle.”

“Many believe – and I believe – that I have been designated for this work by God. In spite of my old age, I do not want to give it up; I work out of love for God, and I put all my hope in Him.”

“There is no greater harm than that of time wasted.”

‘Trifles make perfection,” The best artist has that thought alone which is contained within the marble shell; The sculptor’s hand can only break the spell To free the figures slumbering in the stone.” and perfection is no trifle.”

“It is necessary to keep one’s compass in one’s eyes and not in hand, for the hands execute, but the eye judges.”

“If you knew how much work went into it, you wouldn’t call it genius.”

“The best of artists has no conception that the marble alone does not contain within itself.”

“It is well with me only when I have a chisel in my hand.”

“From such a gentle thing, from such a fountain of all delight, my every pain is born.”

Michelangelo’s David in the Accademia in Florence